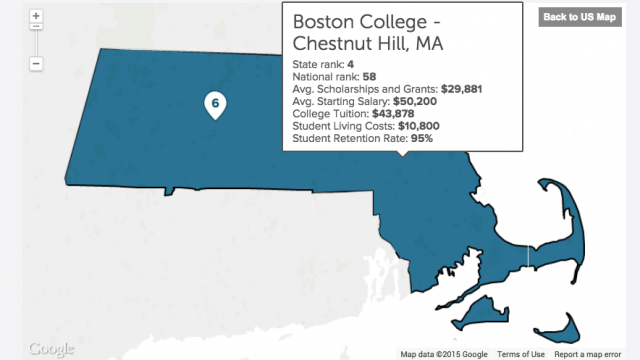 Boston College was ranked the fourth best “best value” college in Massachusetts—and 58th nationally—in a recent data report that calculated college cost against return for students. The study was conducted in March by SmartAsset, a New York-based financial data and technology company that uses interactive software to aid in financial decision-making. SmartAsset draws information from over 130 data partnerships, and put together its college study using information from the 2013 National Center for Education Statistics (NCES), the 2014 PayScale, and the 2013 CollegeInsight.

“With rising college costs, a lot of people wonder if it is still worth it to go to college, and pay that money, and oftentimes take out those student loans,” said AJ Smith, managing editor of SmartAsset. “We wanted to look at a number that wasn’t solely focused on the tuition.”

In determining the value of institutions, the report examined the cost-of-attendance in comparison to a measured value for students. In seeking to calculate the true cost of attendance, the report considered factors beyond just tuition of the school, also considering the average scholarships and grants offered, and student living costs—which include room and board, textbooks and class materials, and transportation. The report took into account student retention rates—the percentage of students enrolled at the institution the following year—and the average starting salary for recent graduates as measures of student’s return.

“We wanted to take a comprehensive look at what college costs, as we know that is more than just the sticker price that you often hear, there’s other things in addition to tuition,” Smith said. “Also, we wanted to look at what you are getting in return as well, which creates this sort of value idea behind going to college and taking out these costs.”

The report used the numbers and data points from these five factors—tuition, student living costs, scholarship and grant offerings, retention rate, and starting salary—to calculate the College Education Value Index, with all factors weighted equally in the ranking algorithm. The universities were ranked by their index score on a scale similar to a grading curve, with the highest ranking school receiving a 100 and each subsequent school measured against this 100. The results were presented on an interactive map and listed on SmartAsset’s website, allowing viewers to compare universities’ value based on the ranking index.

The report lists the 10 best value colleges nationwide—with the University of Michigan topping the list, with a College Education Value Index of 100—as well as the 10 best value schools within each state. Though thousands of schools, both public and private, were initially indexed in this study, the final compilation of the college and universities presented in the report was largely due to the availability of data points for all five factors, Smith said.

BC was ranked fourth in Massachusetts with a 79.12 College Education Value Index score, behind Tufts University (89.20), Amherst College (90.83), and Massachusetts Institute of Technology (93.83).

According the report, the average amount of scholarships and grants given out at BC totals $29,881, the college tuition is $43,878, the student living costs amount to $10,800, the average starting salary is $50,200, and the average student retention rate is 95 percent.

Smith noted that BC succeeded not only in the statewide ranking, but also maintained a ranking of 58th in the national index. She attributed this to the retention rate, average scholarships and grants, and the average starting salary, which were all above the national average.

“The study confirms what we have long known—that a Boston College education is a good investment with promising returns for its students,” University Spokesperson Jack Dunn said in an email. “Being one of only 19 private universities in the United States that is need-blind and meets the full demonstrated need of its undergraduates, Boston College strives to remain affordable to students from a broad socio-economic spectrum.”

Correction: April 9, 2015
An earlier version of this story misstated that SmartAsset is based in California. The company is based in New York. 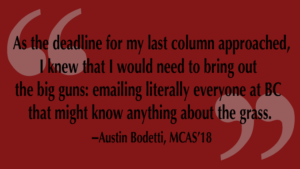