Home » Gregory Angelo, BC ’00, Shares The Conservative Argument In Support Of Gay Rights 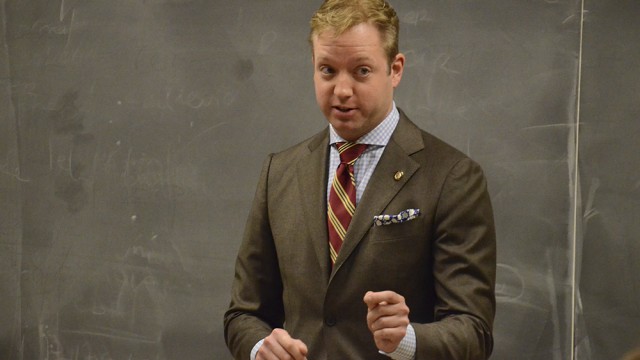 Gregory Angelo, BC ’00, Shares The Conservative Argument In Support Of Gay Rights

Advocating for equal rights of GLBTQ groups might not be common for the GOP nationally, but for the Log Cabin Republicans (LCR)—a group within the Republican party—gay rights and conservative values make sense together. Gregory Angelo, executive director of LCR and BC ’00, returned to his alma mater to speak about the intersection of conservative values and gay rights on Wednesday in a talk sponsored by Boston College Republicans and the GLBTQ Leadership Council (GLC).

Angelo began his lecture by explaining that although the political right traditionally does not support gay rights, many gays identify with the right’s economic policies. He cited Ronald Reagan as being a conservative who was against California’s Proposition 6, which would have banned gays and lesbians from working in California public schools. The title Log Cabin Republicans goes back to Abraham Lincoln, an earlier Republican president who was born in such a wooden structure and who exemplified a commitment to personal freedom.

The gay conservative agenda has increasingly become a space for family values, with growing recognition of gay couples who want to enter into partnership and create a home. Angelo reminded the audience of the left’s original aversion to this platform early in the gay rights era, as they argued that gays should not seek to conform themselves to such a heteronormative and outdated institution.

Noting his unique position as a conservative gay man, Angelo highlighted the polarizing effect the rhetoric of both the far right and the far left has within the conversation of gay rights and marriage equality, with the former accusing those supporting marriage equality of being anti-religion, and the latter accusing those supporting religious freedom of being anti-gay. While the media focuses on instances of tension between these groups, instances of bipartisan collaboration to secure religious and gay rights fall by the wayside.

The death tax is another example of an intersection between gay rights and conservative economic policy, as Log Cabin Republicans support the repeal of this law that taxes assets over $5 million left to someone other than a spouse. Log Cabin Republicans also advocate for a flatter, fairer tax code which puts same sex couples on equal footing with heterosexual couples.

Angelo credits BC with providing him with an excellent education in English and theatre, which allowed him to achieve his current position. He explained that when he was at BC, GLC was not recognized by the administration and had difficulty functioning as a group without any of the benefits of being a registered student organization. He said that BC has made progress, and used to be referred to as “Big Closet” by the small openly gay community. He said that the conservative in him was inclined to respect BC’s decision to exercise their first amendment rights, but he was not obligated to donate any money to the school.