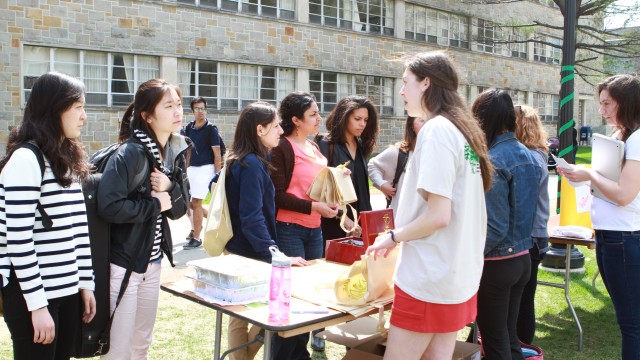 It was a nice day for a barbecue.

Good thing, too. The Brazilian Club of Boston College had been planning a Brazilian barbecue for months, and the budget had already been approved by BC’s Student Organizational Funding Committee (SOFC).

But when the club hauled the ingredients to the counter of a Brazilian grocery store in Allston on that Sunday in September, committee members found themselves in a situation that appears all too familiar. The purchasing card, or P-card, provided by the University to pay for the food was not accepted.

“It just didn’t work,” said Alex Yeghiaian, a member of the club’s executive board and CSOM ’15. Even though the amount had been approved weeks before, “the funds didn’t get transferred in time.”

Yeghiaian paid the $314 bill with his personal credit card. Four months later, he was reimbursed. Several leaders of BC clubs say they struggle with a funding system that is confusing, slow, and, according to Assistant Director of Student Organizations Karl Bell, dependent on relationships and access.

“BC runs on relationships,” Bell, who oversees the funding committee, said. “Where anyone has more knowledge and access, this is like the game of life. BC is very elite—we’re not State U. someplace.”

“Where you have access to Karl Bell, your representative, the SOFC, the more you will have,” he added, referring to himself in the third person.

So contentious is the process by which the $324 per student activities fees are allocated that leaders of many clubs said they bypass it altogether.

One showed documents confirming that it keeps a secret bank account for money it has raised, so the University does not control how the cash is spent. Another collects member fees under the table to avoid reporting it, according to the club’s leaders. A third is forced to have its members pay their own MBTA fare so they can leave the campus for volunteer projects, since it couldn’t get the University to cover the cost.

“Why not make sure that every person who wants to volunteer in the community can do that without paying?” Kelly Bower, president of Learning to Serve and LSOE ’15, asked.

Bell said the student activity fee is mostly restricted to activities on campus. This is one of several policies students complain seem unclear.

“There is some inconsistency year to year with what does get funded and what doesn’t get funded,” the treasurer of one organization said, who asked not to be identified. “When I ask for an explanation, it’s like I don’t receive a proper explanation as to why I didn’t get it funded.”

Her club got $300 approved for an event two years ago, for instance, but exactly the same event was turned down for funding this year. That’s in part because the members of the SOFC change each year, Bell said.

Bell disagreed, however, that the process is inconsistent.

“It’s consistent with the guidelines that are posted each year,” he said. “It really comes down to how well organizations manage their budgets, manage the request process, and how closely they are connected to their representative.”

He also said there is misinformation. Some club officers said they think they can’t keep any money left in their accounts at the end of a year. Bell said that has been changed, and now the clubs can keep the money. What they’re not allowed to do is collect and keep dues and keep that money, fundraise online, or open secret bank accounts.

In the meantime, several clubs have complained about how long it takes their suppliers to get paid. Entertainers, retreat centers, and bus companies, various club officials said, have had to wait months for payment.

The SOFC has sent out a survey of club leaders about how to improve the process, and Bell said a student organization financial handbook is planned for the fall.

“With the SOFC, they could be more responsive to organizational needs,” Bell said. “The challenge of doing so is that there is only so much money in the bank. The biggest challenge I’ve had is that people will say, ‘I didn’t get what I wanted or needed.’”

SOFC
Patients’ Voices Brought Out In Medical Humanities Journal
Arts Fest: How The Big Tents Make Artists Of Us All