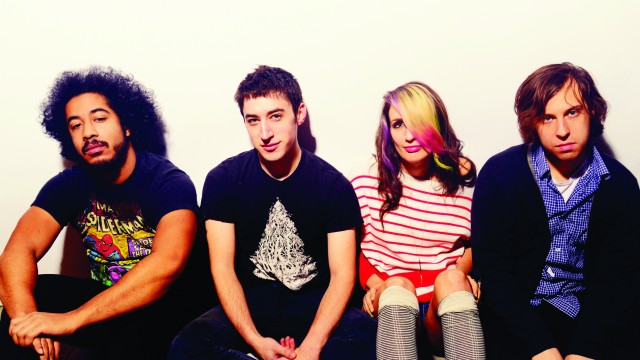 It’s comes as no surprise that Speedy Ortiz, a four-piece indie rock group, was initially compared to lo-fi bands of the late ’80s and early ’90s. Produced at home on four-track machines, artists from the likes of Neutral Milk Hotel to Pavement popularized experimental, not-made-for-radio music, bringing it into mainstream culture. Led by frontwoman and songwriter Sadie Dupris, Speedy Ortiz arrived onto the music scene in 2013 with the release of its first album, Major Arcana. The Massachusetts-based group has since evolved substantially from its noisy ’90s-inspired beginnings in its sophomore album, Foil Deer, by combining discordant sound and distorted instrumentation with Dupris’ characteristic razor-sharp lyricism.

Durpris is a wordsmith and it shows. With an MFA in poetry in tow, Dupris wields words as a weapon against all those who have wronged her. In the opening track of Foil Deer, Dupris warns, “I’ve known you not so very long but watch your back / Because baby’s so good with a blade.” “Good Neck” contains several elements of garage band rock that originally linked the band to its ‘90s predecessors. Featuring tape distortion and jagged-sounding guitar lines, the song is rife with vicious wordplay and biting threats. “Good Neck” alternates between discordant instrumentation and melodic choruses, giving the song a wavering, uneven energy.

Foil Deer, with its deft lyricism and biting angst, never loses its footing despite the dissonance that pervades the album. Dupris’ quick wordplay is menacing and the instrumentation is visceral. In the leading single off the album “Raising the Skate,” Speedy Ortiz juxtaposes industrial rock refrains and hard guitar riffs with a melodic chorus. Dupris isn’t afraid to threaten her listeners with literal and figurative sharp blades. Loaded with feminist overtures, Dupris sings in one of the catchiest melodies off the album, “I’m not bossy / I’m the boss / Shooter / Not the shot.” In another track, “Dot X” is teeming with threats as she warns, “Never touch my blade you fool / You’ll be cursed for a lifetime.

“Puffer” itself could be a track off a ’90s industrial rock record. Interspersed between heavy drumming and a clamor of electric guitar and cymbals, Dupris reels off abstract lyricism and introspective emotions to an R&B inspired beat. “I’m the god of the liars,” she croons, invoking a nightmarish quality to the brooding track.

Not every song is laden with contorted sound, however. “Swell Content,” the shortest song off the album, packs more melody and pop-punk influences than anything else we’ve seen from Speedy Ortiz so far. “Mister Difficult” incorporates a soft rock sound and electric synth as Dupris sings of rejection and ruined friendships. A poppier track, “The Graduate” combines Dupris’ snarling verbal call-outs with a smooth melody. “I was the best at being second-place but now I’m just the runner-up,” she sings of a relationship gone wrong.

Similarly, “Zig” and “My Dead Girl” read like any other folksy acoustic ballad before Dupris enters with her carefully-crafted lyricism and electric guitar. “My Dead Girl” is one of the more offbeat pieces on Foil Deer. Dupris sings of buying a toy outside of a dojo instead of threatening her enemies or calling out soured relationships, marking the song as one of the more whimsical and understated tracks off the album.

Each song contains conflicting musical overtures—fluctuating between soft, indie rock to hardline industrial rock. Speedy Ortiz’s uneven melodies and sinewy guitar riffs are catchy enough to get stuck in your head without forsaking Dupris’ abstract lyricism and the group’s characteristic instrumental cacophony. With Dupris’ sharp wordplay and verbal call-outs predominating the album, Foil Deer changes gears constantly and undergoes several tonal shifts in each song. What should come off as overwrought or forced somehow just works.

Despite Obstacles, Birdball Still Seeks A Playoff Berth
Erbil: ‘There Is No Last Lecture’