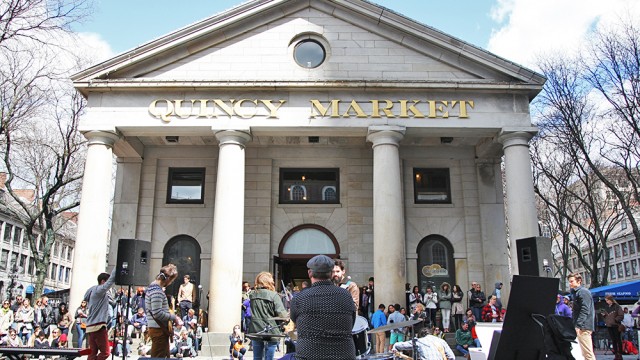 ‘Break The Bubble’ Pushes BC Music Scene To Faneuil Hall

In the midst of the final day of Arts Fest, BC acts engaged in a great migration.

No one knows where the metaphorical “BC Bubble” came from, but somehow the term stuck. While programs such as BC to Boston were created in recent years to encourage students to venture outside of the Chestnut Hill area, the Music Guild brought some of BC’s brightest talent to downtown Boston this past Saturday afternoon. Located at Faneuil Hall Marketplace and Quincy Market, “Break the Bubble” featured 27 musical acts framed under the format of a music festival. While the Music Guild has attempted to bring BC’s music scene to a wider community in past years, “Break the Bubble” was the first to feature two separate stages, and was markedly expanded from previous years.

Originating as a country folk quintet from Massachusetts, the Novel Ideas gained prominence in the Boston music scene and began touring nationally after graduating from BC in 2012. Headlining “Break the Bubble,” the Novel Ideas opened to a large crowd of students and local residents alike. Blending elements of country and folk music, the five-piece band boasts of three different songwriters and vocalists. Emphasizing harmony-driven sound, Daniel Radin, Danny Hoshino, and Sarah Grella, all BC ’12, were featured as lead vocalists while James Parkington, the bassist for the group, provided back-up vocals. Combining indie rock influences with country folk, the Novel Ideas began the set with a rendition of “I’m Not Waiting.” Performing both previously unreleased work from their upcoming album and staple songs from Home, the band’s debut album, the Novel Ideas conveyed an impressive quality of balanced sound in a music festival setting. The five-piece finished off their set with performances of “Montana Mountain” and “I’ll Try” to the raucous cheers of the crowd.

Up next, Small Talk—formerly known as Seaver’s Express in BC’s music scene—brought psychedelic stylings to Quincy Market. Offering a blend of indie rock and psychedelic funk, Small Talk offered a wide breadth of original singles and classic rock covers. The Boston-based band began with a single off their debut EP, titled Us Kids. Led by Sean Seaver, A&S ’16, on lead vocals, the group performed singles such as “Brothers,” “2×2,” and “Strawberry Milk.” Since the band’s reinvention from Seaver’s Express, the group has developed a more psychedelic and experimental sound. Backed by Connor Gallagher, CSOM ’16, on bass, Zoe Ainsburg on vocals and keyboard, Chris Southiere on drums, both Berklee ’16, Small Talk delved into covers of “Dreams” by Fleetwood Mac and “My Generation” by the Who.

Incorporating alternative rock influences, Infidel Castro took to the stage with a hard rock sound. A relative newcomer to BC’s music scene, the four-piece group utilized impressive guitar riffs and elements of classic rock. Led by Shravan Challapalli, A&S ’16, on lead vocals and guitar, the group performed original work and up-and-coming singles from their repertoire. With John Guzzi on guitar, Dan Miller on bass, and Dan Hartel on drums, all A&S ’15, Infidel Castro delved into songs such as “Temptations,” “Preaching,” “Between Friends,” “Suavez,” and “Missed Connections.” Finishing their set with a piece loosely titled “Kendall,” the group was notable for its powerful guitar solos and breadth of original work.

Even with Southiere from Small Talk filling in for Andrew Bishop, A&S ’15, on drums, Lucid Soul brought its usual impressive blend of dance funk and classic rock to the stage. The four-piece jam band, led by James Farrell, A&S ’15, on lead vocals and guitar, performed an eclectic mix of covers and original songs. Backed by John Mahoney, a Berklee graduate on bass and Ted Faust, A&S ’15, on guitar, the group began their set with covers of Mark Ronson’s “Uptown Funk,” the Rolling Stone’s “You Can’t Always Get What You Want,” and Tom Petty’s “American Girl.” In addition to covers, the group performed “Wasting Daylight” off their debut EP.

In a departure from the indie rock headliners for the festival, Slainte, an Irish folk band, offered an impressive array of instrumentation and folk covers. Led by Brady Conley, A&S’16, on bass and lead vocals, the Boston-based band was distinguished by its usage of stringed instruments and faithful renditions of rock and country blues covers. Even without a drummer, the band featured a plethora of instruments—from Mike Perillo, A&S ’15, on guitar, James Harrington, A&S ’15, on tin whistle and harmonica, Jon Harrington on fiddle, and Pat O’Donovan, BC ’13, on accordion and mandolin. Along with renditions of Johnny Cash’s “Ring of Fire” and “Folsom Prison Blues,” the group performed covers of classics such as Van Morrison’s “Brown-Eyed Girl” and Metallica’s “Whiskey in the Jar” as well as Boston anthems, such as the Dropkick Murphys’ “Shipping Up to Boston.” Diversifying the classic rock influences of the headliners, Slainte stood out as one of the more unique performances of the festival.

While the debate is up in the air over whether or not the Music Guild truly broke the “BC Bubble,” the festival brought greater exposure to a crop of Boston’s solo artists and local musical talent while affording BC students the opportunity to branch out from Chestnut Hill and explore the greater Boston area.

bc bubble break the bubble
FACES Council Analyzes Islamaphobia At Final Forum
Year In Review: A Look Back At UGBC’s 2014-15 Leadership