Home » In Numbers, A Snapshot Of The Class Of 2019
News, On Campus, Top Story, Administration

In addition to the new clocks in the classrooms and new grass on the lawns, Boston College added 2,289 new students to its campus this year.

The admissions office received 29,486 applications for the Class of 2019, which was a 27 percent increase from the previous year. Twenty-nine percent of those applicants were accepted (versus 34 percent in 2014), while the yield dropped from 29.0 percent to 26.8 percent.

“I don’t think you can pinpoint one variable in explaining the increase,” Director of the Office of Admissions John Mahoney said. “Boston College’s academic reputation continues to resonate with the top high school students in the country. Boston’s reputation as a city with great colleges attracts thousands of prospective students and their parents to our campus, and I believe our programming leaves a powerful impression on them.”

The Class of 2019 represents 45 states and 39 foreign countries. In addition, 26 percent of the students in the Class of 2019 come from AHANA backgrounds. The percentage of international students rose to 8 percent this year, up from 6.7 percent last year.

Because BC only accepted 29 percent of its applicants, it is considered to be one of the most selective universities in the country, he explained. The middle 50 percent of the class has SAT scores ranging from a 1950 to a 2150.

The Carroll School of Management only admitted 21 percent of its applicants, making it the most competitive of BC’s undergraduate schools. This year, the University also saw increased enrollment in the Lynch School of Education and the Connell School of Nursing.

This year, Mahoney said BC received many more early admission applications, which he believes is due to the change in its classification on the Common Application. Each year, the staff of the admissions office travels to around 1,000 schools to recruit students.

Another change to BC’s application process was that the SAT subject tests were optional. In previous years, BC required two subject tests.

“Jesuit education emphasizes Magis, the philosophy of seeking and doing more,” he said. “For young people who want more than just a great education, who want to achieve both success and meaning in their lives, Boston College is a great place.”

class of 2019 applications acceptance rate
The Choices Of Post-grad Life: Getting On The Right Path
Mo’ Money, Mo’ Problems: Featuring The Notorious L.a.n.d.l.o.r.d. 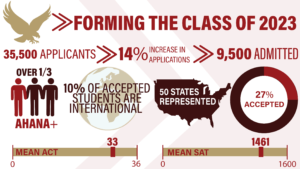