Home » BC Students Look To Expand Photo-Sharing App Off Campus 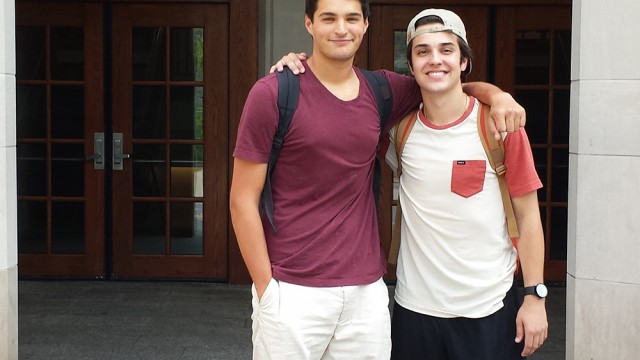 BC Students Look To Expand Photo-Sharing App Off Campus

If a user swipes right, the app will “like” the photo, and it is instantly shared with three more users, while if the user swipes left, the photo won’t be shared. The founders argue this allows for the best content creators to obtain the most exposure.

“The swipe-right, swipe-left functionality has a really addicting feel and keeps bringing users back,” Doherty said.

Doherty, a computer science major, began building apps when he was in high school. He initially created an app with the same name (plus a few letters), “Postcard,” which allowed users to follow places the same way you can follow people with the current version of the app.

“Eventually it evolved into a similar concept, and eventually into this, where we realized we could piggyback off of Instagram and its infrastructure,” he said. Instagram’s open API allows developers and apps like Pstcrd to access users’ photos, followers, who they’re following, and profile information.

Doherty, Chapman, and Uesugi met freshman year while living together in Fitzpatrick Hall. “JP’s [Doherty’s] background working on apps and Jack and my background in social media led us together—we started collaborating on the idea,” Chapman said. He primarily works on the social media presence and marketing for Pstcrd.

Doherty and the team launched Pstcrd after they felt that the App Store was flooded with apps that offer likes and followers to users. The team explained that even if your Instagram account is private, photos can be viewed on the app, but users still have the capability to accept or decline followers. Other users also can’t view their account. Pstcrd is focused on helping users find content that is deemed interesting specifically by the community, unlike many other apps which are “like-for-like” in nature.

When users sign-on to the service, they can share photos that they previously “Instagrammed” with up to 10 random users on Pstcrd. “Users can increase the number of people they share with by following more people or inviting friends onto the app,” Doherty said. The application also features a leaderboard which highlights the top photos and content creators within the past 24 hours. This allows for users to select the best content, unlike the cluttered “Discovery” feed on Instagram.

The team entered their idea into the Boston College Venture Competition (BCVC) last spring. Since the competition, the group has completely redesigned the app. Doherty felt that BCVC both challenged their idea and taught them how serious pitching to VCs can be. “BCVC was an enlightening experience,” he said. “It taught us that if you want to raise money or seek mentorship—you need to go to the right people with the right expertise and knowledge.”

As part of Soaring Startup Circle (SSC) this summer, the group had the chance to meet with many leaders within Boston’s advertising space. “One of the big takeaways from the summer was figuring out how to communicate the value of Pstcrd to potential venture capitalists,” Chapman said.

Just as users swipe left or right to vote on pictures, an advertisement will appear in the voting interface of the app. “This garnered interest from a handful of investors when I pitched at the final SSC event this summer—a couple Boston-based companies expressed their desire to do some A/B testing with us in the future.”

While creating Pstcrd, the team had to overcome some challenges, such as designing the product and finding a relatively inexpensive developer. Currently, Pstcrd has approximately 600 users, and is available on iOS. Looking to the future, the team hopes to figure out how to expand the product into Boston.

“This is sort of a niche product—maybe we could somehow create an independent photo sharing network that’s based around this ‘pass along’ content—or maybe even add other social media platforms” Doherty said.