For a decade now, Boston College undergraduates have known Akua Sarr in her multiple, visible roles on campus: as the former freshman dean of the Morrissey College of Arts and Sciences (MCAS), former director of the Academic Advising Center, and instructor in the Cornerstone Program and the African and African Diaspora Studies Program.

Sarr now takes on a new role, having been promoted to vice provost of undergraduate academic affairs in August.

One of her favorite parts of her old job, she said, was working one-on-one with students on their academic plans, and their personal and career goals. As vice provost, however, Sarr anticipates her role will change a bit.

“So far, I’m trying to get to know the job,” she said. “I know all of the people I’m working with, but I’m trying to get to know a little bit more about their programs and their departments and the missions of the different offices that I’m working with. I’ve had a lot of meetings with directors, folks in student affairs, and mission and ministry.”

“This job is going to be a little more broad than that, because I’ll still be working with the academic advising center, learning resources for student athletes, the Office of International Programs, the Learning to Learn office, the Connors Family Learning Center,” she said.

The promotion came as a surprise to Sarr. The office opened up when Donald Hafner, the previous vice provost for undergraduate academic affairs, retired after 43 years at BC. Hafner was the first person to have the position, and Sarr said he effectively brought together all aspects of the University.

David Quigley, who assumed the role of Provost and Dean of Faculties in June 2014, appointed Sarr as Hafner’s successor.

“When David Quigley moved over to the Provost’s office, I’d worked with David before, for a long time,” Sarr said. “He [had been] Dean of the College of Arts and Sciences. I was really excited when he was appointed Provost, so I kept [a possible promotion] in the back of my head. I was really excited, and I jumped at the opportunity. But it was never expected. I was pleased he considered me a good fit for the position.”

Quigley worked with Sarr through her position in the Academic Advising Center. He called her “a tireless advocate for students” in an email, and commented that the Provost’s Office will place Sarr in a leadership role. Among her peers, Sarr is known as an intelligent and talented administrator who has worked in collaboration with a variety of different departments.

Katie O’Dair, the associate vice provost in Student Affairs, said in an email that Sarr’s deep understanding of the student body will help “make a unique impact on the student experience here.”

Rev. Gregory Kalscheur, S.J., dean of the Morrissey College of Arts & Sciences, said he was excited to see what Sarr had in mind for her new position as Vice Provost.

“Her new role will allow her to share with the wider University community her deep commitment to undergraduate education and her wide-ranging experience helping students to make the most of the opportunities here at BC,” Kalscheur said in an email.

Sarr hopes that she can continue the work her predecessor Hafner started, but also sees room for growth and new developments. She said she wants to develop some of the plans he envisioned, but also leave her own mark and do something meaningful.

Though she is not exactly sure what form these new and meaningful things may take, Sarr is confident and optimistic about the future. Sarr regrets, though, that she will have less interaction with students due to her new responsibilities.

“I’ll be working more big picture, with ideas and planning and programming,” Sarr said. “New initiatives, collaborations. But I won’t have as much of the one-on-one with students.”

That is not to say that students, particularly freshmen, will not be seeing Sarr around campus.

“I still have one advising section I meet with—a group of 14 freshmen—and I serve as their advisor,” she said. “So I’m not completely out of that role. That’s nice. I wanted to keep some aspect of that individual work.”

akua sarr
Blending Into The Boston Blues With Sturgill Simpson
How We Like Them Apples: Beantown On The Silver Screen 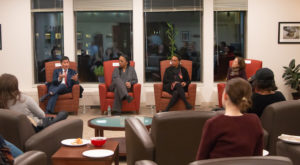