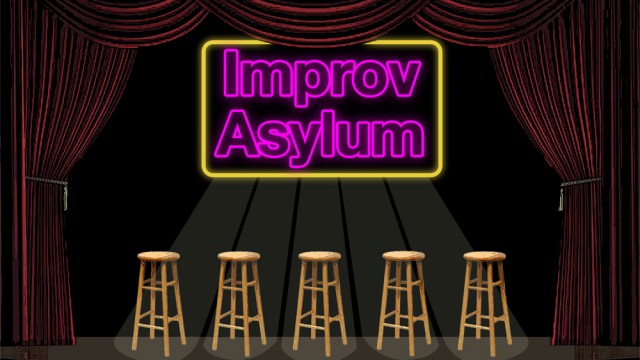 This Friday, the Campus Activities Board (CAB) brought Improv Asylum to Robsham. The improvisation group, located in the North End, holds shows throughout the week. But for one night only, Robsham Theatre was packed with students ready for a show full of laughter.

The whole show was fully improvised and relied on the energy of the audience to keep it going. A member from the group would prompt the crowd with a question or a topic that would dictate the subject of the scene. Then they would choose the loudest, most common, or most creative response. These seemingly straightforward questions like, “What is your major?” would elicit responses interesting enough so as to allow the troupe to run with it and build an interesting scene. There was never a dull moment on stage and the performers always had a witty response to keep things moving.

One of the staff writers from The Heights was picked out from the crowd and asked to reveal personal information about herself. After gathering enough random information, the group proceeded to act out this student’s life for both her and the audience, as the cast understood it. The skit consisted of deadlines for a paper, the irony of her flag football team being called basketball, the correct name to use for each of her roommates, and her love of the Jesuits.

At one point during the show, the group picked up a copy of this very publication. Each member of the group opened The Heights and read to the theater some of the paper’s most recent articles. Improv Asylum then took some comedic liberties and acted out their own interpretations.

One of the articles chosen was “Falling in Love at the Library” by arts editor Ryan Dowd. The skit that followed featured “Ryan Dowd,” the author of the article, loving everything in and about the library. The character tried to stay at the library overnight to go through the dewey decimal system manually to sort books into place. The group highlighted another article called “SockCess Is Starting From The Bottom” by Julie Orenstein. In this sketch it was decided that there needed to be a pool party sock and a slipper sock. Since the largest demographic of customers was teenage girls, they needed to market to this group especially.

Another improv technique the group used was the bell take-back system. As someone was performing, the bell could be rung at anytime and the person speaking would have to replace the word they had just said with another and continue on with the scene as if there was never an interruption. The crowd was asked for a special skill they would put on a resume. The troupe came to a consensus with the talent in cooking and scene progressed from cooking quesadillas in the microwave to enchiladas to cereal.

The next part of Improv Asylum’s show was a guided limb game. Two audience members were handpicked to direct—like a puppeteer—two members of the troupe. The crowd was then asked for something in their room that no one else had. Someone yelled out “frog puppet” and the scene progresses from there. The frog puppet in questions was tasked with helping his son learn his letters from his mother, who was sad about him going off to school.

Improv Asylum did not disappoint. The crowd was overtaken with bellyaching laughter throughout the entire show. The whole group had such fun playing off each other and reading the dynamic of the audience. The company offers classes in Boston for anyone looking to learn. Improv Asylum will be holding a Cards Against Humanity show at midnight on Oct. 16. The show will be held in Hanover Street in the North End.