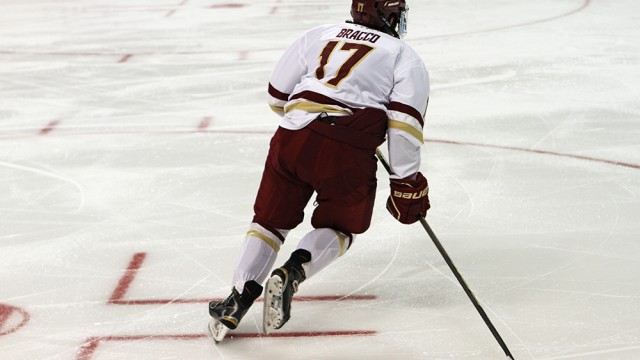 Jeremy Bracco Leaves BC, To Sign With OHL’s Kitchener Rangers

Four sources say Jeremy Bracco will sign with the Kitchener Rangers. None will confirm the deal is signed but told it's happening soon.

BC Hockey confirmed the news shortly after. Head coach Jerry York will not be commenting on Bracco’s departure at this time.

In five games with the Eagles, Bracco notched three assists but no goals. The freshman had initially started on BC’s primary scoring line with sophomore forwards Alex Tuch and Zach Sanford. For BC’s series against Colorado College this past weekend—a two-game set which the Eagles won handily, 3-0 and 5-0—Bracco had been replaced by Adam Gilmour, Tuch and Sanford’s linemate from last season, moving down to the third line with Colin White, his former U.S. National Development Program teammate, and Ryan Fitzgerald. Bracco, the 61st overall pick in the 2015 NHL Draft by the Toronto Maple Leafs, had been rumored to abandon his commitment to BC over the summer and sign with the Maple Leafs. At this moment, it is not certain if Bracco has signed a entry-level contract with the professional club.