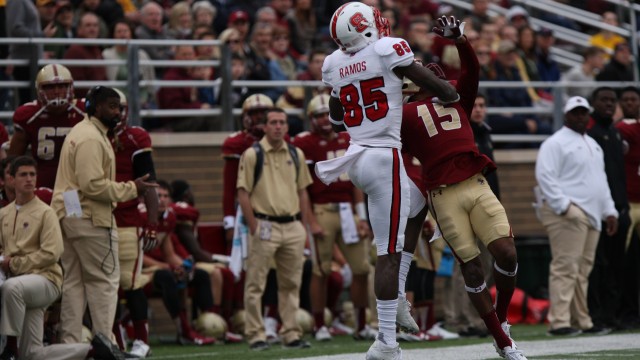 Jacoby Brissett found an effective way to beat an Eagles’ defense that has been on another level this year.

In North Carolina State’s (6-3, 2-3 ACC) 24-8 victory over Boston College (3-7, 0-7 ACC), Brissett and the Wolfpack offense avoided the vaunted BC front seven and stretched the field to capitalize on a vulnerable secondary.

As the Wolfpack learned, you still can’t effectively run up the middle on the Eagles’ defense. Mehdi Abdesmad came through with another stellar performance as he clogged the middle, most notably stuffing NC State running back Jaylen Samuels and driving him back 10 yards for the tackle.

Brissett and NC State opted instead for deep passes to take advantage of a secondary that has been riddled with injuries. As Brissett continued to test the young unit, the Eagles desperately missed the likes of Kamrin Moore and Isaac Yiadom.

While the Eagles did hold their opponent to 212 yards in the air and 139 on the ground, they got exposed on many key plays. Justin Simmons pointed toward four plays in particular that really did the team in: a go route for the first touchdown, a fade that brought the Wolfpack into the red zone, a run play up the middle for a 35-yard touchdown in the third quarter, and a miscue on coverage that brought the Wolfpack into field goal territory.

The one running play that Simmons mentioned, in which Reggie Gallaspy II ran straight up the middle without getting touched for the score, is a bit of an outlier. Overall, the BC defense was stout against the run. The other three plays, though, all highlighted BC’s shortcomings.

On the first NC State touchdown, receiver Maurice Trowell ran a straight down the sideline, torching Will Harris on the coverage for a 83-yard touchdown reception. The Wolfpack only needed one play and 11 seconds to take the lead.

For the majority of the first half and into the second half, Brissett repeatedly threw deep and to the sidelines. At times having three receivers on straight go routes, or motioning a running back out for an empty backfield, the Wolfpack looked deep or to the outside to stretch the Eagles defense.

The game plan was effective. On one play that advanced the Wolfpack to the 9-yard line, Brissett completed a 33-yard pass to Jumichael Ramos, who abused Taj-Amir Torres, going up and over him to make the catch at the sideline.

Brissett flashed incredible arm strength and accuracy as this trend continued, and NC State was a few dropped passes away from completely blowing out the Eagles.

BC got a huge break in the opening quarter when Johnathan Alston caught a deep ball, took two steps in bounds, but then lost control as he went to ground. Upon review, the call on the field of incomplete pass was confirmed.

Later, the Wolfpack nearly scored on a dime of a pass towards the corner of the endzone, that just fell out of the receiver’s hands.

The box score doesn’t show all these drops, making it rather deceiving. A statistical comparison shows that the Eagles threw for more yards, had more first downs, had longer time of possession, and had fewer penalties.

“The amazing thing is that we threw for 257 yards today,” head coach Steve Addazio noted at the very beginning of his post game presser.

John Fadule, in his first career start, did finish 23-of-37 for 257 yards and a touchdown. With a minute left, he completed six straight completions and hit Thadd Smith in the endzone, but it doesn’t take away from the three interceptions that he threw and his indecision in the pocket. When he made short passes, it was pretty effective and he racked up some yardage as a result, especially to his safety blanket in Dave Dudeck, but the deep passes weren’t there. Two of his interceptions were thrown long into triple- and double-coverage.

Fadule was also bailed out when he fumbled in the second quarter. Only trailing by one touchdown, he went to run and the ball popped up into the air at the 20-yard line. The ball was corralled by Eurndraus Bryant, who looked to have a clear path and good shot at the end zone, but the big lineman just dropped the football, which was then recovered by Thadd Smith.

The Eagles put together some good plays, and Fadule found four different receivers for three or more receptions, but they couldn’t do enough against NC State’s top-10 defense to put more than eights points—Fadule found Tommy Sweeney for the two-point conversion—on the board.

All NC State needed was a few quick strikes from Jacoby Brissett to unlock the secondary and keep the Eagles winless in conference play.