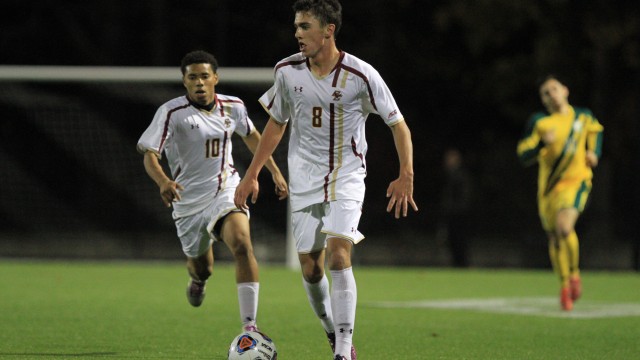 Head coach Ed Kelly has a lot of faith in Simon Enstrom.

Enstrom deserves it, as he is the team’s leading scorer with seven goals. The faith was put to the test, though, as the freshman forward has not practiced for the past week and a half because of a foot injury. Instead of practicing with the team, Enstrom has been working tirelessly with a trainer to get healthy for the NCAA Tournament.

In the 76th minute, Len Zeugner won the ball in the final third and played a beautiful through ball to Zeiko Lewis, who brought it in the box. A precise cross on the ground from Lewis found Enstrom at the back post for the easy tap.

The missed practice time showed throughout the match, as Enstrom’s touch was a bit off and he looked just a step too slow at times. After coming back on after a rest, though, he did what strikers do best and came through for Kelly and the Eagles.

“I try to be a goal scorer,” Enstrom said. “That’s what I was brought in to do.”

Enstrom’s goal broke the deadlock that had lasted for 75 minutes. For the first half, BC had the lion’s share of possession and completely controlled the midfield, but only got a couple clear goal-scoring opportunities.

“We were doing nice little passing—I’m not going to say meaningless passing—but we weren’t challenging them,” Kelly said.

Mohammed Moro and Trevor Davock, the starting outside midfielders, looked lively and had a lot of touches early on, but couldn’t create any individual moments of brilliance to get through on goal. The Catamounts defended well, and most of their chances on the other end came from winning the ball and counterattacking.

Vermont forward Brian Wright was the main target, and the Catamounts’ attack relied on getting the ball to him. Armed with size, a nice touch, and considerable speed for a big forward, Wright constantly dribbled past defenders to get into the box or beat defenders near the corners. For all his work, though, he had a couple chances where he couldn’t get a shot off, and only finished with one shot on net. Jaime Miralles behind him in midfield looked the only other threat, and both players finished with four shots each.

Abe Bibas handed Vermont its best chance of the first half when he forced a bad back pass that got past Zeugner. Wright ran onto the ball, but Toby Ampadu was there to block the shot at the last second.

The game shifted in the second half, as BC played a more direct style in hopes of putting more pressure on the backline and Vermont picked up its own game.

Finishing with 16 total shots, twice as many as the Eagles, UVM won back some control of the game. BC kept patient, though, and finally got the opening goal with 15 minutes remaining.

In the defensive half, Ampadu continued to look like one of BC’s best players. He and Zeugner partnered well to keep the ball away from Wright. Rather than marking his opponent, as he usually does, Ampadu played more of a sweeper role, where he excelled. He constantly had to recover and get the ball to the outside, where a Vermont player got a clear look at goal. Zeugner, on the other hand, commanded the air.

Between the sticks, Alex Kapp kept the clean sheet as he put in a solid performance. He struggles at times with his size, especially going up against the bigger Wright, but his aggressive style worked. He had about four or five punches where he just got his gloves up and over Vermont heads to make the clearances.

The Catamounts played well. They defended well, and were effective in getting the ball to Wright. In the end, BC had just one too many quality attackers and Lewis and Enstrom linked up for the goal.

The win is a big one for Kelly and his team. After making the NCAA Tournament every year from 2007 to 2012, the Eagles had two tough seasons before turning things around this year. To experience this type of game as a freshman is incredibly helpful, and the young team will be put to the test on Sunday, when they travel to Tampa to play the No. 14 seed South Florida.

“We have a lot of freshmen playing,” Kelly said. “It’s a big deal for us.”

The freshman class has provided new life for this team. From Davock and Enstrom to Raphael Salama, who has worked his way into the starting lineup, Kelly continues to put a lot of faith in these youngsters. They have continued to reward him, and BC continues to win.