Home » BC Basketball Dominates With Extra Passes From Carter And Co. 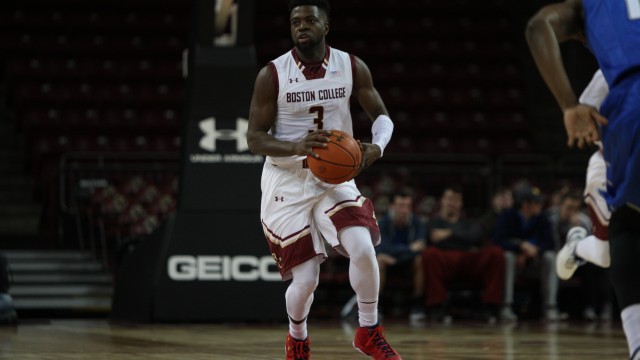 BC Basketball Dominates With Extra Passes From Carter And Co.

One exhibition and one real game into the 2015-16 season, it looked like Eli Carter was to be the heir-apparent to Olivier Hanlan’s scoring genius for Boston College. The fifth-year ball-handler dropped a combined 56 points against Bentley University and St. Francis (N.Y.), including some highlight drives and deep threes.

In 82-57 win over Central Connecticut State University (0-3) on Thursday night, however, Carter didn’t have the touch. He took and missed three of the Eagles’ first five shots, including a layup. Although these were shots he had knocked down in the first two games for BC (2-0), they were still mediocre looks, results of an offense that didn’t appear ready to move.

Head coach Jim Christian tried to shuffle things up after the first media timeout, pulling each of his starters besides Jerome Robinson. Two minutes later, Robinson had two scores at the rim, including a powerful dunk (though not quite the posterizing slam from the home-opener) and a layup, but the four other guys had gone 0-for-3 with a turnover.

That was enough of a wake-up call for the starters, who entered back in and clicked almost immediately. Though Carter never stopped shooting—as natural scorers never should—he began to look for the extra pass, finding two men open on the perimeter for clear 3-pointers in the next couple minutes.

The rest of BC’s offense followed suit. Even with three-plus freshmen on the court at almost all times, they had flashes of stellar distribution around the edge. They took few bad looks even after having success behind the arc, a trap that’s easy to fall into for a young team.

“When I didn’t have my shot going, I really tried to get my teammates involved,” Carter said. “I thought I did a pretty good job at that … and Jerome he picked up the slack on the offensive scoring.”

Indeed, Robinson was the player who really looked most comfortable with the ball in his hands. This is a good sign for the Eagles, who have stuck to a one-man show the past couple seasons with Hanlan. Fifth-year senior Aaron Brown was the only other player who could really put up big numbers when Hanlan was cool, and those mostly came from the perimeter. Robinson, however, is a guy who is unafraid to drive inside—he took and made just one 3-pointer en route to a 15-point performance.

Carter also loves to head into the paint, which is something the two should be able to do for the entire lengths of games, since neither has the pressure of playing 38-plus minutes a night like Hanlan did last season. This pressure on defenses should not only open up guys on the wings, but may also help big man Dennis Clifford, who struggled, as he has in the past, to really establish a presence inside.

Toward the end of the first half, Carter drove in past a defender on the wing and threw up a floater—a shot that looked destined to air-out, until Clifford slipped in the back door, grabbed it in the air, and put it in off the glass. Carter was gypped of the assist in the book—it was marked as a missed shot and a rebound for Clifford—but the pair made it look diagrammed from the start.

This is exactly the type of stuff that the Eagles will need to employ if they want to stay competitive in the ACC. That isn’t to stay their play today would have beaten a top team—CCSU repeatedly left BC’s shooters open on the wings, which allowed Matt Milon and Ervins Meznieks to go 5-of-9 from long distance. In the second half, Carter repeatedly hustled the ball down and drove to the hoop before CCSU had set up, a trick that will only work for so long.

BC’s performance from the line was really the biggest concern on the day. The Eagles hit an abysmal 5-of-16 of their free throws on the day, including just 2-of-10 in the second half. Although Clifford was the biggest perpetrator—making just one of his six attempts—no one who went to the line was perfect, with Garland Owens and Johncarlos Reyes each going 0-for-2.

“We’re a good shooting team, so I’m not overly concerned,” Christian said. “But it is a problem. We’ll have to obviously address that.”

Besides his team missing their free shots and falling behind ball-screen in the first half, Christian seemed pleased with his team’s performance—he was in a good enough mood after the game to volunteer to sing along with the band’s “Sweet Caroline,” which echoed into the press conference from Alumni Stadium. He knows his team is young, and there are going to be growing pains soon, but when you’re rebuilding, you have to start somewhere. His team is starting in a pretty good place right now.