Home » Johnson’s Crew Out of Sorts Offensively in Tallahassee 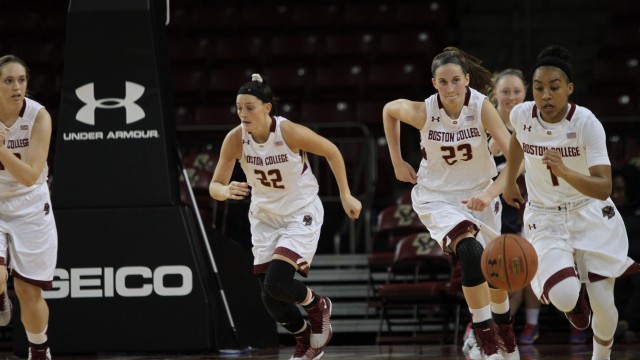 Johnson’s Crew Out of Sorts Offensively in Tallahassee

Two teams entered the Donald L. Tucker Center in Tallahassee, Fla. with remarkably similar stories: defensive teams with great non-conference records, both coming off a disappointing loss to open conference play. Boston College women’s basketball and No. 19 Florida State University entered with with the conference’s No. 2 and No. 3 scoring defenses, respectively, giving up around 50 points per game.

Unfortunately for the Eagles (11-4, 0-2 Atlantic Coast) it was FSU (11-4, 1-1) who showed that you also need a great offense to belong near the top of the ACC, as the Seminoles beat down BC, 75-42. Five Seminoles scored in double digits and preseason All-American Adut Bulgak came one rebound shy of a double-double. Meanwhile, the Eagles shot 23 percent in the first half, with season-leading scorer Kelly Hughes shooting a paltry 1-of-7 from 3-point range with only five points.

FSU started fast and then never looked back, making a couple of quick treys and jumping out to an 11-0 lead. By the time Hughes hit a 3-pointer to open up the scoreboard for business, it was already an uphill battle. As the ’Noles caught fire from beyond the arc, the lead became increasingly insurmountable. The FSU starters stretched out BC’s defense—four of the five had at least one 3-pointer—to open up space inside for Bulgak and Shakayla Thomas, who combined for 26 points.

On the other end of the court, BC could not get anything going offensively. Hughes and Nicole Boudreau, the team’s 3-point specialists, hardly got open looks. Even freshman Mariella Fasoula, who had a team-high 13 points, couldn’t find uncontested shots, shooting well under 40 percent. Even the easy points did not come easy. BC tanked at the charity stripe, converting only 41 percent of their free throws. Against an FSU team that already gives up the least fouls in the ACC, a team needs to take advantage of these free points, and BC just could not do that. It’s largely part of the reason the Eagles finished the first half with a mere 15 points.

Beyond the shooting percentages, turnovers were the most telling statistic for the game. The Eagles average over 17 turnovers per game, and this game fit that trend. BC had more than twice as many turnovers as the Seminoles, capped by FSU’s 16 steals. Brittany Brown alone had eight steals in a great defensive showing. It is hard to win any game with a -13 turnover margin, let alone a game against a team as talented as Florida State.

While the second half was slightly better, and the Eagles actually outperformed FSU in the third quarter, it was a hollow victory, if that. The Seminoles clamped back down on defense in the fourth and never allowed the lead to fall to less than 20 points.

It was an ugly loss for an Eagles team that built up so much momentum coming into their out-of-conference schedule, going 11-1 with the only loss to No. 21 University of Oklahoma. Dropping the first two games of conference play is not ideal for BC, but with two of the next three games against top 20 opponents, including a date on Jan. 14 with No. 3 University of Notre Dame, head coach Erik Johnson still has time to right the ship.