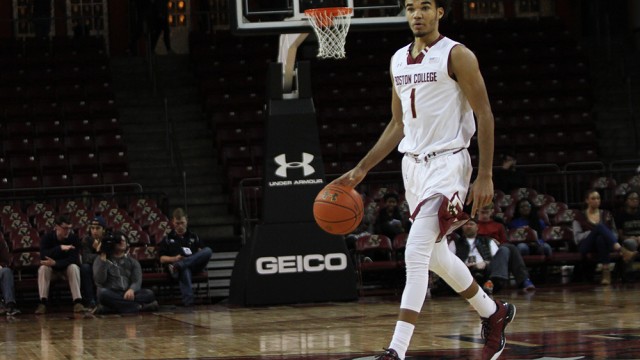 After losing seven straight games to open its ACC schedule, men’s basketball now has two more roadblocks to overcome its difficulty in notching a conference win.

According to Zack Spears of Eagle Action, point guard Jerome Robinson broke his right wrist during Boston College’s game against Florida State on Tuesday night. He is expected to miss three to five weeks. Spears also reported that guard Darryl Hicks will miss at least BC’s game Saturday against North Carolina after suffering a concussion against FSU.

On a fastbreak dunk toward the end of the second half, Robinson went up for a strong dunk and slammed into the ground out-of-bounds. He got back up and walked off under his own power, but remained on the bench for the duration of the game.

Less than two minutes later, Hicks went down hard after taking an elbow to the face as he tried to grab the ball at midcourt. He exited the game immediately, and went to the locker room before the game ended.

Both losses will hurt the Eagles going forward, as Hicks has been stepping up as one of head coach Jim Christian’s top hustle players. After missing his first two years at BC with ACL injuries, Hicks has averaged 4.0 points and a rebound in 13.8 minutes a game off the bench.

Without Robinson, however, BC will have to reshape its offense. The first-year ball-handler is second on the team in scoring (11.6 points per game) and assists (2.8) behind Eli Carter, and is also second in rebounding (4.0) behind center Dennis Clifford. He also leads the team in minutes and steals per game, with 33.1 and 1.4, respectively. In his absence, there will be an even greater pressure put on Carter to carry the load on the offensive end.

These injuries come at an especially difficult point in BC’s already-treacherous ACC schedule. After its matchup at No. 2 UNC on Saturday, the Eagles will travel to No. 11 Virginia and No. 16 Louisville, before returning home for another game against the Tar Heels.

injury jerome robinson darryl hicks
In the End, It Does Even Matter
Previewing BC Hockey: How to Beat the Irish