Home » Previewing BC Women’s Hockey: What to Expect in the Beanpot Final 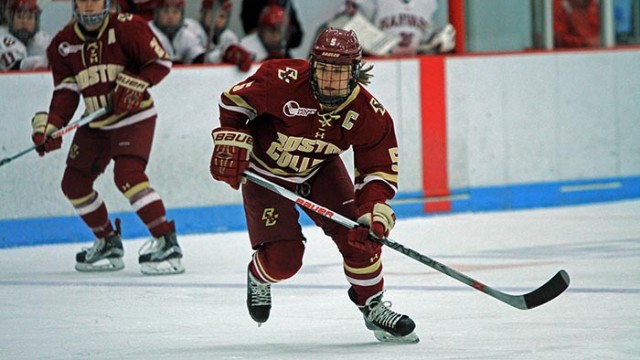 Previewing BC Women’s Hockey: What to Expect in the Beanpot Final

Boston College women’s hockey has the opportunity to go for the big 30 on Feb. 9. After defeating every opponent they have faced, the Eagles (29-0-0, 20-0-0 Hockey East) will play Northeastern University in the Beanpot final to claim their 30th win, as well as the Beanpot trophy, which the Eagles failed to earn last season after a defeat in the final round against Harvard. For BC to get there, however, it has to get through the Huskies (25-4-1, 19-2-0), who have had an impressive season themselves.

Northeastern and BC have played each other at the finals five times in the women’s Beanpot’s 37-year history, most recently in 2014. The Huskies have defeated the Eagles four times at the end of the road, but the most recent matchup fell in BC’s favor, with the Eagles winning 3-0.

Preserving the victory streak is more important than ever for the Eagles, who last year experienced a late-season collapse at the hands of a Beanpot squad. To remain perfect and prevent the same effects from bringing BC down, it will have to showcase its best performance against the Huskies.

Last Time They Played: BC faced Northeastern on Nov. 28 in a 6-1 blowout for the Eagles. Goals for BC came from regular scorer Alex Carpenter, as well as contributions from Andie Anastos, Dana Trivigno, Kenzie Kent, and Kali Flanagan. The matchup against Northeastern showcases the Eagles’ offensive depth, which is just what a team needs to bring home the trophy. BC also made do with less shots, notching 23, while the Huskies only capitalized on one of its 37. Northeastern offers tough competition to the Eagles, as the team has gone on a 13-game win streak since the last meeting against BC.

alex carpenter haley skarupa beanpot 2016 kendall coyne bc hockey
Fruity Funk and Mellow Beats Mingle in Juice, William Bolton Concert
Music of the Roadways, Taking It If We Can 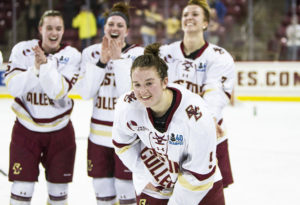 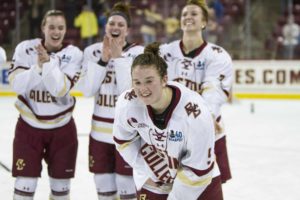