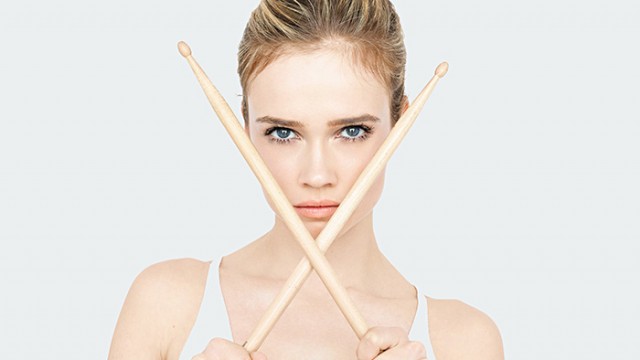 Relatively new to the music scene, British pop artist Florrie came out with a sentimental, yet edgy song this week with “Real Love,” from her debut album yet-to-be released. The video features the singer and her beloved going about their everyday lives in various settings, but it’s all portrayed through a homey lens that gives the video a candid feel. Paired with its casual lyrics, the video creates an entertaining and compelling presence.

The video takes on the quality of a “domestic documentary,” throwing a flurry of scenes at viewers such as cutesy walks in the park, waiting at the dinner table, lazily playing the guitar, and unapologetically dozing off on the couch. All of this seems fine and dandy, but these scenes intermingle with less homey ones, like Florrie and her lover hanging out at a low-key nightclub or Florrie standing alone in her kitchen, haphazardly holding a knife. To top all the discord off, the video ends with the singer lying at the bottom of a swimming pool, blurred and distorted by the water. The creepy turn of event highlights the occasionally rocky nature of “real love / Hit me like a hurricane / I feel it running through my veins.”

Whatever the reason for the added strangeness, it helps to cut the cutesy quality of the song and prevents the video from coming across as saccharine. The singer’s outfits—which always seem to match the rooms she is standing in—add to the visual effect. Whether it’s the blue jacket that matches a blue bookcase, or a red pantsuit that matches a red-lit room, this artistic choice lends a more deliberate note to the restlessness conveyed by the video’s constant jumping around from scene to scene.  In a sense, this somewhat odd color coordination functions as a unifying aspect between snippets of the singer’s life.

The video itself isn’t all that innovative, especially to audiences familiar with other pop artists like Taylor Swift or Selena Gomez. What the song may lack in novelty, it makes up for in catchiness with its unique mix of electronic beats and pleasant vocals. All in all, “Real Love” is not just another throwaway pop song, and its entertaining quality was a pleasant surprise, leaving viewers to wonder what’s next for the artist.

florrie
‘Hail, Caesar!’ Pays Homage to the Hollywood of Old Despite Disjunct Narrative
‘Zoolander 2’ Goes Out of Style with Stumbling Plot