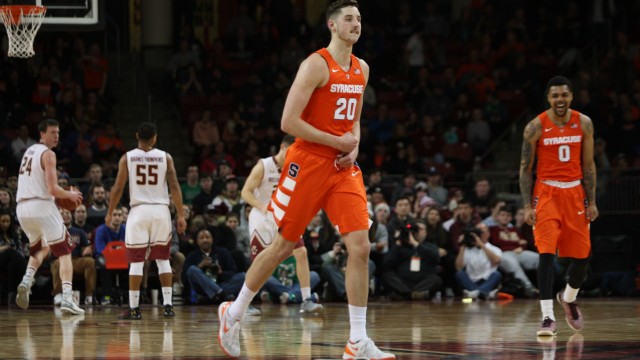 Boston College men’s basketball has yet to win a road game in the 2015-16 season, and after Sunday afternoon’s loss to Syracuse University, that statement remains true.

Yes, the game was held in the friendly confines of Conte Forum, but those confines were anything but friendly to the Eagles. Fans packed the stands for a virtual sellout, but an estimated 80 percent of fans sported the classic orange and blue colors of the visitors. Granted, BC is a just about ideal ACC travel destination—located in a popular city with easy travel and cheap game tickets, road fans are almost guaranteed to see a win. And upstate New Yorkers will take any reason to get the hell out of Syracuse.

But the fact that a water pipe burst in the Beacon St. entrance lobby didn’t make Conte feel any more like home, either.

Considering that BC played arguably its worst game in its first meeting with the Orange this season—a 62-40 defeat a month ago—one has to feel better about the Eagles’ output the second time around.

“Offensively, for the most part, I thought we were terrific, playing against a very good defense,” head coach Jim Christian said following the loss. “Our problem was defense in the second half. We gave them about three or four ‘walk-in’ threes, and you can’t do that.”

While the Eagles held the Syracuse offensive attack at bay in the beginning of the game, a lazy defensive effort in the waning seconds of the first half set the tone for a mediocre defensive performance in the second stanza. Following a missed shot by Malachi Richardson with just seconds on the clock, Trevor Cooney—a BC killer through and through—snuck into the paint, grabbed the rebound with minimal resistance, and threw up a layup before time expired, stretching the ’Cuse lead to three points.

In the second half, freshman Tyler Lydon took over the game for the Orange. The 6-foot-11 swingman has the shooting touch of a guard, but the size and strength of a power forward in the post. He made the Eagles pay in both zones, torching BC for 20 points on 66 percent shooting.

Lydon catalyzed the possession that broke BC’s back with 10 minutes remaining in the second half. Following a missed reverse layup from Garland Owens, Lydon grabbed the board, sprinted to the wing, and demanded Richardson for the ball. Richardson obliged, Lydon buried the trey, and what could have been a seven-point deficit was suddenly 12 points.

Lydon was the shining star for the Orange, but head coach Jim Boeheim’s team received something that Christian’s did not—a supporting cast that, you know, supported.

Behind Lydon, Michael Gbinije dropped 17 points, Richardson contributed 15 points, and Cooney produced 12 points of his own. The Orange only played seven during the entire game against BC, but four of those players were in double figures.

For the Eagles, Milon and Clifford combined for 41 of BC’s 61 total points. Eleven of the remaining 20 points came from Sammy Barnes-Thompkins, most of which were scored in garbage time. The nine points left were contributed by Eli Carter, who played all but one minute in the contest, and Garland Owens, who finished with as many fouls as points.

“We had some guys that needed to step up tonight because of our injuries, and they did not,” Christian said. “We have to learn, and those guys are going to have to keep working.”

Carter’s performance on Sunday was especially questionable—the graduate transfer only connected on two of his nine shot attempts. While Carter grabbed nine rebounds, he assisted on only one basket and turned the ball over three times, concerning numbers for BC’s primary ball handler. In his first few games in the maroon and gold, Carter was the first—and sometimes, the only—reliable option on offense.

As the season went on, however, his shooting percentage dropped as Milon’s, Clifford’s, and injured guard Jerome Robinson’s numbers increased. Carter is still a big part of the offense, but he does not appear to be the primary contributor that he was in BC’s first few games.

There is never love lost between BC and Syracuse, and a Valentine’s Day showdown between the two teams seemed to be somewhat fitting. Unfortunately for BC, the Orange was feeling it just a little more on this day.