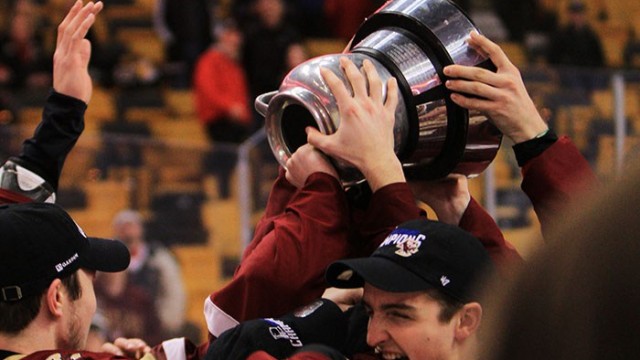 Last Monday marked Boston College’s 20th Beanpot championship. The very next night, the women’s team took home its sixth trophy. There was cause for great celebration on the Heights, but elsewhere I was surprised to see murmurings of discontent.

I’m talking, of course, about the Internet—that virtual hive of faceless, seething contempt and vitriol. Browsing articles and sports blogs after I got home from the game, I was shocked by the number of comments complaining about just how boring the Beanpot has become. I almost couldn’t believe what I was reading because after a 28-minute power-outage delay, three scoreless periods with incredible goaltending on both sides, and a phenomenal shot from Alex Tuch to end the whole thing in a first-time-ever 1-0 score, the farthest word from my mind was “boring.” Commenter after commenter seemed to think that BC and BU’s joint dominance of the tournament’s 64-year history was beginning to overstay its welcome. I chalked the fervor up to annoyed Northeastern or Harvard fans who were struggling with the disappointing realization that this year was still not going to be their year, and went to bed.

Imagine my renewed surprise at finding an article the following day on Yahoo! Sports arguing that it may be time to blow up the whole tournament format. For many of the same reasons I had read from commenters the night before, the author came to the same conclusion: expand the tournament to include other New England teams. Though I’m sure someone with a much higher college hockey IQ than my own could explain the reasons why this idea might theoretically work, however unrealistic, I have to say that I absolutely hate it. And while I can concede that a theoretical expansion might spice things up and increase the level of competition, I must admit that those words are also far out of my mind when I think of the Beanpot.

Even though the tournament has only been around for a little over a third of our school’s history, the first thing that comes to mind when I think about the Beanpot is tradition. Like all great sports rivalries, the Beanpot has a long and storied history filled with heroes and villains, triumphs and defeats. But where the Beanpot transcends college rivalries like Navy-Notre Dame, Harvard-Yale, or even our very own hockey grudge against BU, is in the sense of community it generates. The atmosphere at the Garden during a Beanpot is just somehow inescapably different than that of a Battle of Comm. Ave. matchup at Kelley Rink or Agganis Arena. It isn’t just the impressive venue, though that certainly helps, and it isn’t quite the sense of history, either, as the Beanpot is younger than our personal rivalry with BU. There’s an oddly intangible magic about playing for something tangible—that coveted trophy.

When the tournament is on and the Garden swells with generations of Eagles, Terriers, Huskies, and Crimson, the sense of history is well and truly alive. From older fans in jerseys of teams long gone to future Eagles and Terriers hoping to see their favorite player emerge the hero, the Beanpot is a convergence of Boston sports culture past, present, and future. It’s my girlfriend’s father telling me about getting stuck in the Blizzard of ’78 and me someday telling my kids about the 28-minute power outage and three aching, scoreless periods. In an era when BC and BU have all but forgotten their commuter-college pasts, the Beanpot stands as one of the final vestiges of last-century Bostonian culture. It radiates an energy of hometown community and humble beginnings. A rivalry in which four of Boston’s greatest teams grab their gear and meet in the middle of the city to see who’s best. BC and BU trundling down the B Line, Northeastern on the E, and Harvard fittingly crossing the river on the Red Line. And even in an era when our programs have veritable superstars playing for them, this tight-knit association makes the little kid skating for the first time on the Frog Pond believe that someday he or she could play in the Beanpot.

So while I respect Providence, Lowell, UVM, and all the other great New England teams, I would never want to see them included in the Beanpot. And to the long-suffering fans of Harvard and Northeastern, hang in there. Just ask the Navy Midshipmen and their fans what a win after 43 years feels like.