Home » Dancing Kings: Sitting Down With the Boys of BC Dance 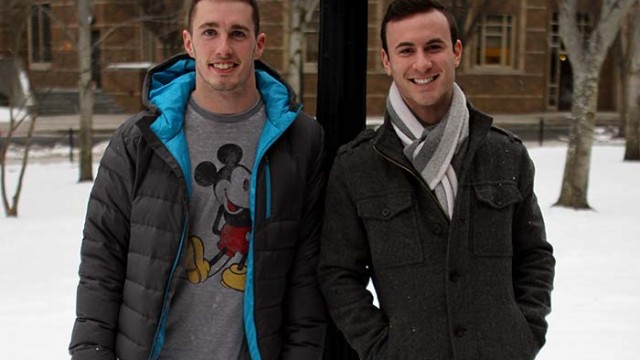 Dancing Kings: Sitting Down With the Boys of BC Dance

Two dancers sat beside one another in quiet contemplation, each using his individual experiences to formulate some kind of a response to the same impossible question. One of the guys glanced down at the tabletop, the other was equally at a loss for words—his eyes searched for an answer, as if words would suddenly materialize somewhere on the ceiling tiles in Addie’s Loft.

Andrew Troum and Liam Connolly, both MCAS ’16, struggled to think of what they disliked most about dance. The problem was, neither of them could come up with anything at all.

As the only male dancers on their respective BC-based dance teams—Troum an integral part of the Dance Organization of BC and Connolly an essential member of BC Irish Dance—the two guys started thinking about how they ended up devoting most of their days to dance.

Troum began dancing as part of a musical theater group when he was eight years old. At 16, he joined a local dance studio near his hometown of Ocean City, N.J. Opting out of the glitz and glam of competitive dance teams, he invested his time in a studio that focused on the technical aspects and dramatic artistry of dance. “What you see on Dance Moms, that’s obviously a competition studio,” he said. “It’s all about the tricks, the costumes, and the exciting faces. My studio was more technique-based, so it was definitely more balletic and less about jazzy faces and all that.” It was here that Troum focused on honing his contemporary jazz skills, learned to master other genres, and developed a deeper love of dance.

Having tried his hand at choreography in a DOBC show last year—a successful endeavor that resulted in a high-energy routine set to Britney Spears’ “Womanizer,” where he assumed the role of a suave, sought-after bachelor onstage—Troum has made many an impressive contribution to DOBC over the course of his college career. While abroad in London, Troum took his talent overseas when he joined a traveling dance troupe that toured cities along the southern coast of England.

In contrast to Troum’s relative inexperience in the realm of competitive dance, Connolly is well-versed in the pressure to perform. Because the backbone of Irish dance is competition, Connolly has attended more than his fair share of local feis competitions, nationals, and Worlds’ championships. For Connolly, the pressure of a perfect performance to secure points at a competition has always been an integral aspect of dance. He was only two when he tried on his first pair of dance shoes. Twenty years later, and he has choreographed a handful of routines, peppered his passport with stamps from countries that have hosted competitions, and made his mark as a standout contributor to BCID’s captivating performances.

Though their groups differ greatly in preferred dance styles—BCID does traditional hard and soft shoe Irish dance, while DOBC dabbles in jazz, ballet, pointe, and a little bit of everything else—Troum and Connolly have experienced much of the same sentiments when it comes to being the only boy in a female-dominated dance group.

Laughing, Connolly explained how Irish dance has helped him become more outgoing. “As the only guy on the team, you have to stand up for yourself sometimes,” he said. “The girls always have ideas on costumes for different dances. You have to speak up, you have to be like ‘I’m still here!’” Troum nodded enthusiastically in agreement. “Yeah,” he said. “Sometimes I have to say, ‘Sorry girls, but I can’t wear that!’ In my genre’s choreography, there’s a lot poses and sexy stuff that the girls like to do. There’s definitely some sexy stuff.”

When it comes to pre-performance jitters, however, the guys have had very different experiences. “Oh yeah, stage fright has always been a thing for me,” Connolly said with a smile. In spite of the occasional cold feet, however, years of training has prepared him for such situations. “I’ve had multiple times at competitions where “I’ve just completely gone through a mind blank, or I just didn’t remember the steps in my routine. I’ve actually just made them up on stage and gone with it.”

Troum shook his head. “I don’t get stage fright. I get nervous, but i don’t get frightened. I get eager, and I might think to myself, ‘I need to get out there right now. I need to go onstage immediately.’ I can’t wait to get out—I’m terrified in a way, but I can’t wait.”

“Yeah,” Connolly added. “That’s exactly where I am now.”

For both dancers, BC has been an environment that was incredibly accepting of their preferred pastime. “I think that the BC community thinks it’s awesome that you go onstage and do your thing—regardless of whether you’re a boy or a girl,” Troum said. “I’ve never at this school felt any judgement, any negativity. In fact,” Troum added, “I’ve always felt the exact opposite.”

Coming to BC from an all-boys high school where Irish dance wasn’t something he chose to advertise often, Connolly was anxious to see how his college friends would react to his beloved hobby. “I thought coming to BC would be the same kind of situation where I would have to go through the whole process again,” he said. “I thought I’d have to show people what it was so that they understood. But people are actually a lot more open than you would think at BC. If you’re a guy who wants to dance, my advice is to just go with it.”

“When I’m dancing, I’m probably my happiest self,” Troum said. “If I had a bad day or got a bad test grade, I don’t think about it at dance. I’m with my friends doing what we like to do. I’m just so in the zone, so happy when I dance.” He looked to his left and nodded at Connolly. “Know what I mean? It’s really the best thing that I’ve ever decided to do.”

Well into their last semester as undergraduates at Boston College, the two reflected upon the painstaking hours of dance practice, the nights spent perfecting intricate steps and meticulously-mapped choreography. Still, there was no negative aspect of dance that they could decide on. Despite the obvious downsides of any big-commitment club on the BC campus—physical exhaustion, time constraints, the pressures of performance week, for example—the two agreed that dance has been an incredible part of their BC experience.

“The whole dance community at BC is really interesting,” Connolly said. “For instance, the Irish dance family on campus is amazing. It’s really a tight-knit community. They’re my best friends.”