Home » Previewing BC Basketball: What to Expect From Virginia Tech 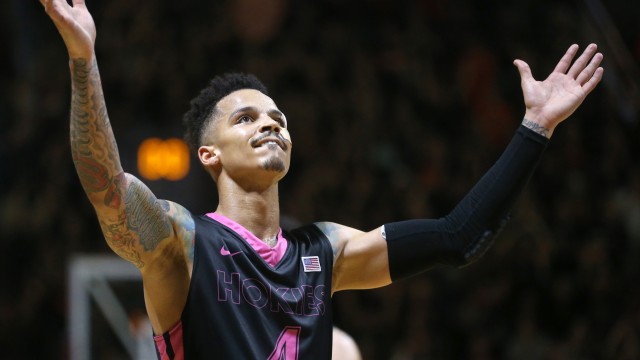 Previewing BC Basketball: What to Expect From Virginia Tech

After an embarrassing blowout loss against Wake Forest, Boston College men’s basketball must regroup and prepare for Tuesday night’s game against Virginia Tech. The Eagles (7-20, 0-14 Atlantic Coast) are still searching for that elusive first conference win while the Hokies (14-13, 6-8) just picked up their sixth on Saturday. BC is looking to avoid a 15-game losing streak.

Sunday was a disaster for the Eagles. Wake Forest’s unimpressive conference record of 1-13 heading into the game provided BC with some hope, but that feeling went away quickly. The Demon Deacons held a 41-14 lead at halftime and they never looked back. Obviously a more spirited effort will be needed to vanquish the Hokies on Tuesday, but at least the Eagles will be heading home to Conte Forum for the game.

BC has only four more chances to pick up a conference win before the ACC Tournament, Luckily for the Eagles, three of the four games are at home. Both teams have incentives to play hard, but for largely different reasons. BC is essentially eliminated from March Madness (assuming a miraculous ACC Tournament championship does not occur), but failing to win a conference game would be horrifying. No team wants that label, so the Eagles have plenty of motivation despite the lack of success this season.

On the other hand, Virginia Tech is starting to make a case for a March Madness appearance. While a team with the 10th-best conference record does not typically have a chance at March Madness, the incredible competition within the ACC allows for a team like Virginia Tech to make an argument. Furthermore, seeding for the conference tournament is at stake. If the Hokies want to make a run in the tournament and improve their resume further, a better seed could go a long way. Currently, Virginia Tech sits at 10th in the conference, but they could slide up or down a seed during the next couple weeks. Dropping to the 11th seed would be devastating, as, with Louisville ineligible, the first 10 seeds earn a first-round bye in the tournament.

While the Eagles are coming off an ugly loss, the Hokies are coming off a key victory against Florida State. Both teams are fighting for that critical 10th seed in the conference, so this win was certainly uplifting for Virginia Tech. Seth Allen led the way for the Hokies, scoring 23 points off the bench in the 10-point victory. Florida State led for more than three-quarters of the game, but a strong second-half effort allowed the Hokies to prevail.

The Last Time They Played: The last matchup between these teams took place on Mar. 2, 2015 at Cassell Coliseum. That night, the Eagles prevailed 66-59 behind Dimitri Batten’s 18 points. The game was one of three conference victories for BC during the 2014-15 season. BC standout Olivier Hanlan only converted 5-of-13 shots from the field, but the Eagles managed to win the game nonetheless.

1) Eli Carter’s Efficiency: Averaging 15.8 points per game, Eli Carter is the leading scorer for the Eagles, but his 36.8 field goal percentage needs to be improved if BC is going to win a conference game this year. He got back on track in Sunday’s game against Wake Forest, particularly in the second half, as he shot 4-of-7 from the field. This is definitely a positive sign, as he had struggled mightily in the previous two games. He made 1-of-17 field goals against Clemson and 2-of-9 against Syracuse, so even a few baskets in the second half of a blowout are encouraging. The Eagles will definitely need their leading scorer to have an efficient game if they want to pull off the upset against Virginia Tech.

2) Avoid a Major Collapse: Basketball is a game of ups and downs, but the key to success is limiting the momentum of your opponent. This is something that BC has struggled with mightily during the last few games. The Eagles have allowed their opponents to dominate for an entire half rather than overcoming a run and keeping the game close. Against Wake Forest, the collapse came very early and the game was over by halftime. Against Clemson, BC had a three-point lead heading into the second half, but the Tigers dominated the second half and won by 11. Against Syracuse, the Eagles only trailed by three points at halftime, but once again, a second-half collapse allowed the Orange to win by 14. Even in the close game against North Carolina, BC was held scoreless for almost four minutes late in the second half. This pattern just can’t happen if the Eagles want to defeat the Hokies.