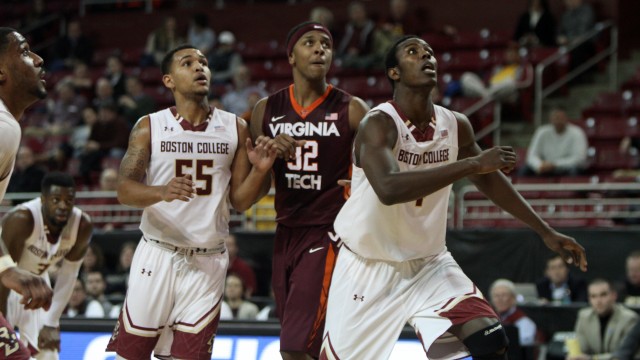 Legendary Michigan State head coach Tom Izzo has more coaching experience than all but a few men in college basketball today. With his 21 years of experience on the job comes a refreshingly honest perspective on his team, free from the sugarcoated statements of younger coaches hoping to simply retain their jobs.

Earlier this season, his team was ranked No. 1 in the country for a little more than a month. More recently, in an interview with ESPN.com, Izzo was asked about the perch his team had occupied.

When pressed about the current top teams in the nation and whether any of them had the ability to pull away from the rest of the pack, Izzo gave a very unusual response.

“I don’t think anybody is gonna say there aren’t 15 teams that could win it this year,” he answered.

Izzo was describing the unprecedented state of parity in college basketball during the 2015-16 season. Five teams have already lost a game while at the top spot in the rankings, with Villanova currently the sixth different school to lead the AP Top 25. That number is already four more than all of last season, when Kentucky dominated the polls virtually every week.

Reporters, players and coaches alike have all discussed their belief in this parity and the waves it has sent through college basketball. But does it actually exist? And if it does, why is this particular season so susceptible to parity?

Before beginning, it’s important to define the parity that we’re looking for. Though it could take many forms, when discussing parity here, the term will refer to the absence of great teams and the proliferation of above-average teams. For an example of what this type of parity entails, imagine a large lecture class. Say one or two students get incredibly high grades on every exam, almost always occupying the spots at the top of the rankings of the exam scores. Then, there is probably a group of 15-20 students who consistently get above-average grades on exams. Despite their presence in the same grade region, their positions relative to each other change depending on the exam. The student that heads this second group on one exam might drop back a few spots on the next exam. If you removed the couple of students, you would introduce parity into the class, with the top score in the class changing frequently, depending on which of the students in the second group happen to perform better on any particular day.

This definition appears to fit the pattern emerging this season. The constant fluctuations atop the polls appear to indicate both the absence of any great teams and the presence of a clustered group of very good teams that change in position relative to each other almost weekly.

Looking back over a period of 10 years, through the 2006-07 season, this season’s lack of great teams is magnified.

Next, let’s look at some more advanced stats. Since win-loss records can sometimes be misleading, a look at the analytical ranking of the best teams in the country should give a more accurate representation of the relative strengths of teams across the years.

Ken Pomeroy, one of the premier college basketball analysts, ranks teams based on their Pythagorean rating, a team’s expected winning percentage against an average D-I team. This season’s current No. 1 team on kenpom.com is Villanova, with a Pythagorean rating of 0.9446. Based on the same nine-year period considered above, in which the average rating was 0.9659, Villanova has the worst rating of any of the top-ranked teams. In fact, last season, six teams boasted a better rating than Villanova currently has.

Having proven the absence of top-flight teams, let’s see if the same above average group still exists or if college basketball is just having an unusually poor season.

Again using Pomeroy’s website, 14 teams currently have a Pythagorean rating over 0.9000. This number can be used as an arbitrary cutoff to designate the group of very good teams. Looking at the nine prior seasons, an average of 13.8 teams per year amassed such a mark.

Incredibly, despite the utter lack of dominant programs, the 2015-16 season actually possesses a slightly higher than average number of very good teams. For comparison, despite having had six teams with a higher rating than Villanova has this season, there were just 12 teams in the 2014-2015 season with a rating above 0.9000.

Now that we comfortably know parity exists in college basketball this season, let’s examine the causes.

Decline of the Dominance of Traditional Programs

If you were to ask casual college basketball fans which teams were the best in the country during any given season, they would probably give pretty similar responses. Teams like North Carolina, Duke, Kentucky, and Kansas would likely dominate the results. Breaking from the past, that answer would be wrong this season.

This season marks the latest that neither Kentucky nor Duke has been in the Top 10 since 2006-07. Fans can usually count on Mike Krzyzewski and John Calipari to consistently roll out national championship contenders year in and year out. With Duke’s injury woes and the high-profile struggles of Skal Labissiere at Kentucky, neither of those two teams has lived up to its lofty Top Five preseason ranking. Duke actually slipped out of the rankings for a brief period, the first time since 2007-08 that the Blue Devils weren’t a ranked squad.

Despite currently holding the No. 5 ranking, North Carolina hasn’t exactly been dominant this season. The Tar Heels have six losses and recently had a three-game road trip that saw them drop the first two games before needing a ferocious second-half rally to topple ACC cellar-dweller Boston College in the final game.

This lack of success for the traditional powerhouses has opened up conference races across the country. The ACC offers the best example of this, with six teams currently situated within two games of first place in the conference.

Over the past nine seasons, an average just 2.7 teams finished the season within two games of first place. While the remaining two weeks of conference play do provide some opportunities for teams to separate from the pack, it still speaks to the parity caused by the decline of UNC and Duke.

In those nine years, exactly half of the teams that finished within two games of first place in the conference were either UNC or Duke outfits. With their decline, a potential power vacuum has opened this year, allowing non-traditional powers like Miami (FL) to ascend near the top of the conference.
The Top Teams Lack the Top Players

With no offense to Ryan Arcidiacono, your average college basketball fan probably couldn’t identify Villanova’s senior point guard as one his team’s best players. Arcidiacono’s plight sounds pretty familiar to members of the other schools currently ranked in the AP Top Five—Kansas, Oklahoma, Iowa and UNC. With the exception of Oklahoma’s Buddy Hield, who has reached exploding supernova status at this point, the majority of the best players on these teams are veteran leaders, who produce solid but not spectacular results every night.

UNC has Marcus Paige and Brice Johnson, Kansas features Perry Ellis, Wayne Selden, Jr., and Frank Mason III, and Iowa sports Jarrod Uthoff and Peter Jok. All of these players are very good but don’t provide the constant night-in, night-out impact that a superstar like Hield does. They are more susceptible to off nights and shooting slumps and can often be neutralized by elite defenses.

Having entire teams built upon these types of players creates a bit of variance in the quality of those teams’ games. A seemingly easy victory against an unranked opponent can turn into a blowout defeat very quickly, as Kansas found out in its 86-67 loss to Oklahoma State in late January.

This season’s top five boasts just two players—Hield and Uthoff—that are ranked among Chad Ford’s top 30 players for the 2016 draft. The top NCAA players in his rankings, such as Ben Simmons and Kris Dunn, play for teams that don’t figure to pose serious threats in March.

Particularly, this year’s top five teams lack NBA-caliber interior scoring—a post player that can grind out points on nights when the rest of the offense slumps. Three of last year’s Final Four teams—Kentucky, Duke, and Wisconsin—had this crucial bailout option. Players like Karl Anthony Towns, Jahlil Okafor, and Frank Kaminsky provided security blankets for their respective teams. Their ability to overwhelm opponents with their sheer size, skill, and athleticism allowed their teams to compete on nights when their shots weren’t falling. As a result, those teams’ performances varied less on a night-to-night basis than this year’s top teams’.

Top Teams Rely Too Much on 3-Pointers

Likely because of this lack of high-quality interior scoring, the top teams in the country this season rely more on the 3-point shot than top teams usually do.

This season’s top five is one of just two groupings over the last 10 seasons that took more of its shots from downtown than the average team. In fact, the majority of those groups took far fewer threes than the average team. The only other season where the top five took more 3-pointers than the average team was 2012-13. That season also had just two teams with fewer than three losses by Week 15, the lowest number over the prior nine seasons, indicating a possible correlation between a reliance on 3-pointers and nationwide parity. It makes team performance more variable from game to game, another possible reason why this season’s top teams aren’t as good as prior seasons’ top teams.

As college teams attempt to adjust to the growing analytical mindset within the game, trickling down from the NBA, greater parity may become an unintended consequence. Instead of winning correlating to long-range prowess, top college teams still appear to be those that dominate the paint and possess top-flight big men.

That’s not to say that games this year are uninteresting. The see-saw nature of the season has provided the usual share of mind-blowing endings and absurd game-winners.

As we move into March Madness, without a historically great team to root for or against, expect the unexpected. The good thing about a season without a clearly defined top team is that the NCAA Tournament can go in an infinite number of directions, keeping fans glued to their seats for every minute.

The only difference between this year and years prior is that the team cutting down the nets in Houston in April will have to admit that it was never a real No. 1 team.

*All data and rankings as of Sunday, Feb. 21