Home » The Right Must Stop Trump 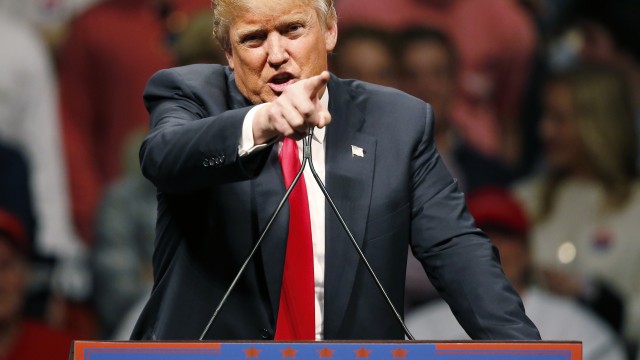 The Right Must Stop Trump

His candidacy has been amusing, his brash style a comedic respite from the tedium of the nomination process, but it has gone on long enough. He has become a serious candidate for the Republican nomination, and it is time for the joke to end.

His success thus far has already reshaped the political scene. He has single-handedly removed Jeb Bush, the establishment favorite, from the presidential race, and he has done so not by effectively combating Bush’s policy ideas or his political principles, but by verbally bullying him into submission on national television. This has set a dangerous precedent for future candidates: to run for president, you do not need to have any eloquence or knowledge of policy, you only need to land enough high-profile insults on your competitors to destroy their images.

He has achieved massive success without any reasonable policy proposals, preaching to an angry niche section of the American electorate. All Trump is doing is furthering a great illusion, allowing many of the nation’s voters to live a political fantasy in which the system is turned upside down by a bold outsider. His followers clamor for change, but what they do not understand is that Trump cannot possibly bring it. Change in the American political system comes via compromise and nonpartisan dialogue. Yes, the system is ineffective in its current state of gridlock, but does anyone truly believe that Trump as president would change that? He has already isolated the entire left and much of the established right. Without their support, what monumental change could he be able to legislate unto desperate America?

Trump’s supporters are setting themselves up for another four years of anger. If he is not elected, they will return to their homes and quietly stew in distress, waiting for another audacious outsider to run for president and promise them the same deliverance. On the other hand, if he does win, they will be stuck with an unqualified, legislatively impotent president whose inevitable failure in office will leave them more outraged than before. It’s time for the Trump fantasy to be broken, before it gets any more dangerous.

It’s time for another candidate to step up and slap some sense into the Republican primaries. Ted Cruz’ campaign is fizzling out—he has failed to win the evangelical voters that make up the core of his supposed support—and Ben Carson has neither the popularity nor the eloquence to stand up to Trump. This leaves Marco Rubio. His practical fiscal policies give him enough appeal to the center-right, and his anti-amnesty stance resonates with grassroots conservatives and reduces the amount of crucial ammunition he can provide for Trump’s insults. He has been extremely sharp in debates, with the exception of his brief humiliation at the hands of Chris Christie, and is certainly witty enough to go toe-to-toe with Trump. He has just begun this fight, and he must continue it until Trump is exposed to his own followers for what he is—a celebrity with a head for flashy insults and no realistic political potential.

What should not be overlooked is that Trump’s supporters are not wrong to be angry. It is perfectly reasonable of them to want change in a system that they believe has done them wrong. But they should place their trust elsewhere, in someone more electable. They are living an implausible political delusion, not understanding that a vote for Trump is a vote for a divided Republican party, a scary standard for presidential qualification, and four more years of disappointment.

The time for entertainment is over. Rubio needs to get serious about taking down Trump. To do so, he should pursue him directly on the matters of policy, and attack the elements of Trump’s character that would make him an ineffective president. He should wake up Trump’s supporters. They have been dreaming for too long.

donald trump republican ted cruz marco rubio
Miles Between Me and My Culture
The Opioid Crisis: A T Ride Away