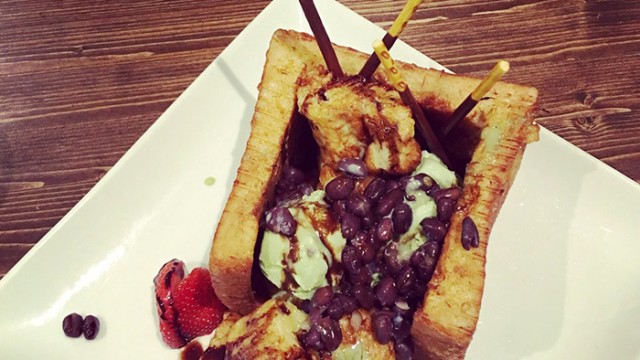 Hoping to share their family’s recipes with the people of Boston, sisters Gloria and Emily Chin opened their American-Asian fusion restaurant Double Chin in the Theater District on Jan. 28. Situated in the middle of Chinatown, Double Chin distinguishes itself from its other neighboring competitors by offering Americanized versions of traditional Chinese cuisine.

The ambiance is bright yet homey, and the employees translate the uplifting atmosphere into the dining experience. Multiple employees attend to each table to ensure that the customers’ every needs are met. They provide helpful and honest guidance in navigating the extensive menu, which distinguishes certain dishes as vegetarian, house favorites, spicy, and “Insta-worthy.”

The variety of square tables, uplifted tables, bar seating, and even a swinging bench can comfortably accommodate about 50 people, so reservations are not necessary.  Though reservations are not needed, the business is obviously healthy, as indicated by the restaurant’s recent expansion to include a kitchen dedicated to take-out orders, which is currently under construction.

“We’ve been working on this for quite a while now,” Emily Chin said. “We’ve been thinking about what our favorite childhood classic foods are. We’re foreign and raised in Boston, so we have a deep understanding of Asian-American culture and food.”

Double Chin serves such an eclectic mixture of foods that the menu can be a bit overwhelming at first glance. This wide variety of items (priced between $4 and $27) includes salads and sandwiches, as well as a separate menu dedicated to customizable noodle bowls. As a result, Double Chin can appeal to the tastes of a range of customers, certainly satisfying those who are nervous about approaching Chinese cuisine, as well as those who are already enthusiastic about Asian flavors and nuances.

At the same time, Double Chin incorporates its own Chinese flair on classic American favorites, making it a destination for avid foodies that hunger for an experimental dining experience. Among some of its most exotic dishes are the tomato pork chop rice, Portuguese chicken rice, matcha tres leches grass jelly, Hong Kong-style French toast, and Spam and Taro fries—a classic Chinese snack and a customer favorite. In an effort to remain true to its Chinese identity, all of the traditionally “American” comfort foods contain a Chinese flair. For instance, the mac ‘n cheese is a blend of wide rice noodles, cheese, bacon, scallions, and panko.

Another example of the Chin family’s fondness of puns, the “’Poutine’ your mouth” is a popular dish, with its incorporation of Kimcheese, sriracha mayo, and sesame dressing. The restaurant also serves authentic Hong Kong-style tea in Mason jars—a testament to its American and Chinese character.

Because of the moderately priced menu, sharing several plates is not only ideal but very possible, especially considering the wide variety of items on the menu. Interesting small options include the “addictive edamame,” which is topped with a unique seaweed seasoning that sets the dish apart from a traditional edamame. The crunchy ramen salad, a blend of crunchy purple cabbage, edamame, carrots, ramen, scallions, and citrus sesame dressing, also provides a bright and salty menu item that is reminiscent of an upscale version of coleslaw.

Although Double Chin has only been open for a month, the cube toast is clearly the most popular item on the menu. With its impressive size and intricate and beautiful presentation, the cube toast can already be found on the Instagrams of Boston foodies everywhere.

The cube toast comes in four different varieties, proving that Double Chins surely knows how to satisfy any craving. But no matter which cube toast you choose, you can be sure that it will be stuffed to the brim with ice cream and more exotic items, such as Pocky sticks and mochi. Only one spoonful of this visually pleasing concoction reveals that it is not only beautiful but delicious, leaving no question as to why this is the most popular item on the menu. The cube toast in and of itself justifies a visit to the newest addition to Chinatown.

In the coming months, the establishment hopes to stay open from 7 a.m. to 4 a.m.

“We’re hoping to do a lot of the after party crowd,” Chin said.

food
A Dream Within a Dream: How a Ride on the T Invigorated Me
With Integrity, the Marathon Movie Could be Made Right