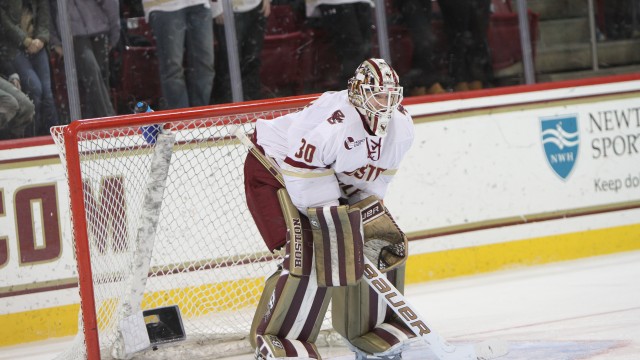 Boston College men’s hockey put an efficient beatdown on the University of Vermont in Game One of the Hockey East Quarterfinals. BC (25-5-5, 15-2-5 Hockey East) outclassed its opponent early on, and its junior class took advantage of some Catamount blunders to put the game away before 8 p.m. by a 3-0 score.

All four BC lines pressured Vermont (14-21-3, 6-13-3) throughout the first period. Vermont made it easier for BC than it needed to be, though. A mere four minutes in, Austin Cangelosi set up in Wayne Gretzky’s office and waited for a lane through to an ignored Adam Gilmour. His faithful linemate Gilmour took his time burying the game winner from point blank range. It didn’t get much easier for Vermont.

“The story for us tonight was just getting off to a tough start in the first period,” Vermont coach Kevin Sneddon said. “The first goal was on a blown coverage off a faceoff. The second goal was kind of a gift.”

Cangelosi was the recipient of that gift when defenseman Trey Phillips and goalie Mike Santaguida bungled a puck exchange behind their net. Before the goaltender could recover, Cangelosi deposited an easy wraparound to put BC up 2-0.

The South Florida native padded his stats early in the second period thanks to another Catamount blunder. A poorly timed line change left Cangelosi and Ryan Fitzgerald two-on-zero, and Cangelosi picked up his third point as Santaguida let Fitzgerald’s wrister skitter through his pads and across the goalline. Immediately after, Sneddon benched his starter. The Catamounts will roll with backup Packy Munson to start Game Two.

Perhaps buoyed by the change in net, the Catamounts got off nine consecutive shots on goal after Fitzgerald made it 3-0. Fitzgerald’s tally effectively ended the game, though, because BC goalie Thatcher Demko can cover for his skaters’ mistakes. The junior withstood 17 Vermont shots in the second period as he cruised to his 10th shutout of the year, extending his own program record. After the game, Demko praised his defense, who were skating one short with a late scratch of Josh Couturier.

“I don’t think there was any one play where I was questioning whether the puck was going to go in or not,” Demko said. “There’s a good trust level between by defensemen and I … it goes both ways, and I thought tonight that we were all on the same page.”

Last season, BC took the first game of its quarterfinals against Vermont before dropping the next two. The Eagles did it in much of the same fashion, as a blowout in the opener sent Santaguida to the bench. Senior Brody Hoffman took over not long after and stoned the Eagles. And York and his team remember that.

“We understand that last year, we had a similar situation, and Vermont’s not gonna roll over and let us to go the Garden [for the semifinals],” York said. We have to earn that.”

That iteration of BC, however, was not of the same quality as York’s current squad—this team is more explosive. But the biggest difference is Demko’s elevated performance. If Vermont trips over itself on Saturday like it did tonight, the series will be over just as fast as Friday’s game.