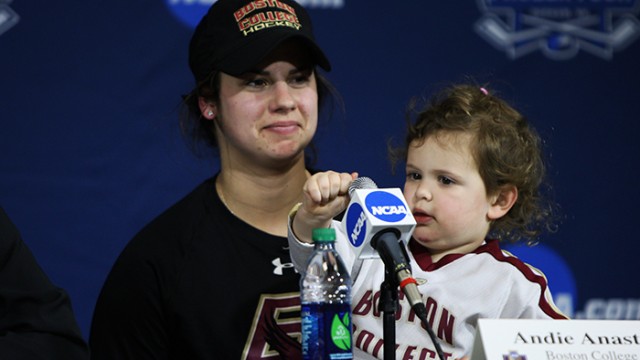 Three Cheers for BC Women’s Hockey

In a year of utter turmoil for Boston College athletics, one team has stood above the rest.

We know it was NOT football or men’s basketball. The Olympic sports—the two soccers and field hockey—both performed admirably, with men’s soccer and field hockey putting up their all-time best results. Even men’s hockey has given plenty of reason for doubt, struggling to shore up its defense against Vermont and Northeastern in the Hockey East Playoffs.

In reality, there was one team, from beginning to end that gave reasons for promise of bringing glory back to the Heights. That team was BC women’s hockey.

Last season brought heartbreaking results for the Eagles. Katie Crowley’s team didn’t lose a game for the first three months of 2014-15, before falling to Harvard in the Beanpot Final. BC continued that trend of struggling only when a trophy was on the line, falling to Boston University in the Hockey East Championship Game and again to Harvard in the NCAA Semifinals.

This year was different.

The Eagles opened as the consensus No. 2 in the country, blazing out of the gate with 40 wins in a row. They took home the two trophies that eluded them last year by crushing Northeastern 7-0 in the Beanpot and BU 5-0 in the Hockey East title. BC beat those pesky Huskies from across town six times this year. Throughout it all, Crowley’s crew set numerous program records as a team and as individuals.

Minnesota dashed BC’s hopes of an undefeated year. It would’ve been the second perfect campaign in the history of collegiate women’s hockey, along with Minnesota’s own 2012-13 team. But instead of writing their names into the annals of sports history, the Eagles were handed a New England perfect season: lots of wins with one giant loss. And, like the 1972 Miami Dolphins do every year when the the last undefeated football team goes down, those Golden Gophers will pop the champagne.

Rather than spend too much time lamenting the ending, let’s take a moment to salute one of the greatest teams, and a few of the most outstanding players, that have ever taken to the ice in Chestnut Hill.

I’ve covered just about every team at BC over my two years as sports editor, but it’s hard to say any team has been more entertaining than my run-ins with Crowley and her bunch.

I’ll miss the most dangerous partners-in-crime in the history of BC hockey: Alex Carpenter and Haley Skarupa.

Carpenter, the 2015 Patty Kazmaier Award winner, is, without question, the best player to lace up the skates—male or female—at Kelley Rink. She’s the school’s all-time leading scorer, regardless of sex, with a career 279 points: 134 goals and 145 assists. Twice, Carpenter, the daughter of NHL star Bobby Carpenter, has led the nation in points. And she destroys her opponents as the team’s primary center, with an intense glare off the draw that helps set up many of BC’s goals. No player controls the ice quite like Carpenter.

Skarupa has often played second fiddle to her linemate, but by no means is she any less talented. She joined Carpenter in the scoring race, finishing this season with 79 points and 244 for her career. Skarupa also wrote her name into BC lore with her overtime game-winning goal on Friday in the National Semifinal against Clarkson. Her goal stands as the best moment in program history to date.

We may not get to watch those two at BC anymore, but they’ll still be teammates for years to come. The two team up in international play—they’ll represent the United States at the IIHF Women’s World Championships next week, and there’s no reason to believe Skarupa won’t join Carpenter on the Olympic team in 2018. Plus, Carpenter and Skarupa were selected first and fifth, respectively, in the inaugural NWHL draft by the New York Riveters. They’ll join fellow graduating senior Dana Trivigno, one of the most fun players I’ve had in a postgame interview and one of the scariest to see on the ice.

But there’s plenty of hope for the future of this program. And it’s hard to imagine that the Eagles won’t be right back here in the same spot next season.

Goaltender Katie Burt has been another one of my favorite players to cover at BC. The now-sophomore was the first feature I’ve ever wrote. I had never had a sitdown interview with a player, and she hadn’t ever had one with the media. Needless to say, there were a lot of “um’s.” But when she mentioned that she lived in the room above me in Cheverus Hall, and we shared a few laughs about our love of Cory Schneider (but hatred of the New Jersey Devils), it made for 30 of my most memorable minutes with an athlete.

Over the last two seasons, I’ve loved watching Burt become a dominant netminder. She has fought criticism that BC’s spine-crushing defense prevents her from seeing any real attempts at the net. The stats somewhat back that up, too. But if you saw the national championship game, it’s not hard to notice that Burt is the most viciously hungry goalie in the country. She fought off unbelievably hard attempts from those dynamic Minnesota forwards. And her drive to win has been incomparable. Take one look at her face when she’s knocking shots off her pads left and right. Burt is one of those players who can’t be stopped when she wants a win.

On the attack, there’s no reason to think the Eagles will slow down any time soon. Five BC underclassmen joined Carpenter, Skarupa, Trivigno, and Lexi Bender on the nation’s top-75 scoring list. BC will return speedy juniors Kristyn Capizzano and Andie Anastos, the latter of whom was a captain this season. It’ll have Kenzie Kent, the two-sport superstar who has played with Carpenter and Skarupa on the top line in each of the last two seasons and whose fire for winning compares only to Burt. BC has the most lethal weapon in the country from the point in Megan Keller—she led the nation in scoring among defenders. Like the Golden Gophers’ Potomak, BC has a young sensation in Makenna Newkirk. The freshman was second to Potomak in the country with 49 points among newcomers and will look to take over the reins as BC’s best scorer next season. And there’ll be more coming next season. BC landed one of the nation’s top recruits, Caitrin Lonergan, a two-time member of Team USA.

But, best of all, the Eagles will still have Crowley and assistant coach Courtney Kennedy. The two have become the most revered coaching staff in the sport. Their recruiting ability is unparalleled, and they can out-coach anyone in the country. And, along with Crowley’s bubbly 2-year-old daughter, Camryn—who is, without question, the best reason to cover a game—she has the best locker-room environment in the country. Just look at this tweet that she sent out only minutes after the game was over.

Thank u to all of the fans who supported our team today! Players played their hearts out for all of u! So proud of what we accomplished!

At the end of this trying year for BC fans, women’s hockey gave everyone reason to hope. The team didn’t finish the job this year. But with a cast of All-American talent and the nation’s best coach, the Eagles proved they have staying power. Even without Carpenter and Skarupa, they’re out to do it all again next season.

And every team in the nation should be on notice.