Home » Who’s the BC-est of Them All? This Year, it’s Junior Elio Oliva. 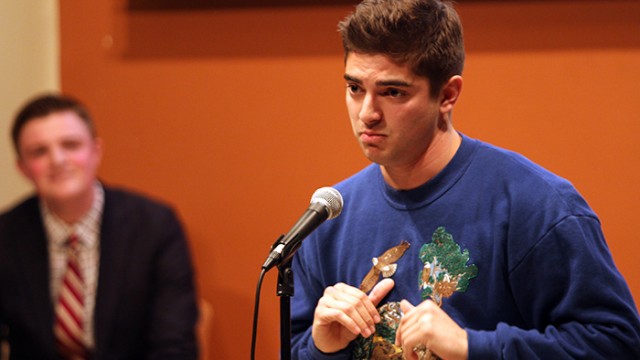 Who’s the BC-est of Them All? This Year, it’s Junior Elio Oliva.

James Breen, MCAS ’17, rollerbladed around the Vanderslice Cabaret room, while playing the accordion to “Sorry” by Justin Bieber and “Trap Queen” by Fetty Wap on Thursday night at the 2016 competition to become Mr. BC.

Seven Boston College students strutted their stuff in this year’s Mr. BC, a male beauty pageant sponsored by the Residence Hall Association. Elio Oliva, CSOM ’17, was named the 2016 Mr. BC.

The seven contestants, who were nominated by their residence halls, kicked off the evening by performing a choreographed dance to “SexyBack” by Justin Timberlake.

Following the performance, each candidate came out in swimwear of his choice, ranging from boardshorts to speedos. Each contestant was then asked what class they would teach at BC.

Felipe Gastaldi, CSOM ’18, answered that he would teach a class on FIFA, the video game, while Liam Driscoll said he would teach Portico. Driscoll’s Portico professor Michael J. Smith has really influenced his time at BC, he said.

Greg Blackburn, MCAS ’19, hoped to bring back nap time with his BC class, and James Breen, MCAS ’17, said he would teach students how to ride the MBTA.

The contestants then proceeded with the talent portion of the event. Driscoll showed off his talent of being able to put on a pair of skinny jeans using no hands, while Oliva performed a stand-up comedy routine for the audience. He referenced the BC housing process, Donald Trump, and Matthew McConaughey in his skit.

Tyler Stites, MCAS ’17, performed an original rendition of “Save Dat Money” by Lil Dicky titled “Spend Dat Money.” During finals week, Stites would send out parodies of popular songs to help his friends deal with stress, he said. Jack Kelly, CSOM ’19, performed “Sweet Pea” by Amos Lee on the ukulele.

“I picked it up a couple months ago,” Kelly said at the event. “I had an extra $50 and saw a $50 ukulele on Amazon. I’ve been annoying my roommate ever since.”

Once the talent portion of the competition came to a close, each of the candidates showed off his formal attire. Each brought out a date to the stage, and Driscoll brought up his computer with his mother on FaceTime.

The three judges, Matthew Hession, the winner of Mr. BC in 2015 and CSOM ’16, Meredith McCaffrey, MCAS ’17, and Thomas Harwell, the assistant director for career counseling, deliberated each contestant’s performance throughout the evening. They chose the top three contestants—Driscoll, Brutten, and Oliva—before narrowing down their choice to the winner, Oliva.

“I wasn’t expecting to be nominated,“ Oliva said. “I love BC and I am trying to get involved as much as possible. I think this is a good experience.”

rha mr. bc elio olivas
At ‘Take Back the Night,’ Students Reclaim Sexual Assault Experiences
‘If a Ginger Has a Beard, Does That Make Him a Redneck?’