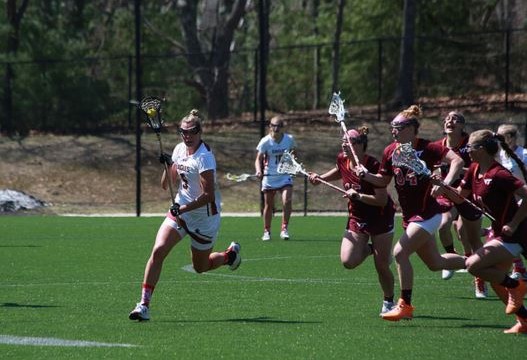 Six maroon jerseys filled the 8-meter arc, constantly pushing the white jerseys to the outside. No one could break in. But after five minutes of battle along the perimeter, a white jersey broke through. No. 5 dodged two defenders as she wove in and out of the 8-meter arc toward the goal. With two defenders on her tail, No. 5 shuffled to center and fired one into the net from the front door. No. 5 Tess Chandler dropped her stick and ran to her teammates to celebrate the first of what would be 15 steps to victory.

Boston College lacrosse constantly battled the Virginia Tech defense. The Hokies, however, could not withstand the Eagles’ pressure as they continually broke through and found net. The Eagles (9-6, 2-5 Atlantic Coast) defeated the Hokies (5-11, 0-6) in a hard-fought 15-10 win.

After BC won the opening draw and stormed downfield, the Hokies blocked the perimeter of the 8-meter mark. After five minutes of battling from the outside, the Eagles broke through and Chandler snuck one past Hannah Sieger. Caroline Margolis tallied one of her own 15 seconds later to give BC a 2-0 lead.

Each team tallied two, making it a 4-2 game. After taking it downfield, Margolis tried to push inside the defensive barrier, but was denied entry three times. She found Kate Rich behind the net, donning the No.19 Welles Crowther memorial jersey. Rich tossed it to Kate Weeks who one-timed it into the twine right in front of Sieger.

BC continued to dominate the first 30 minutes and headed into halftime with a comfortable 9-5 lead.

But this lead was almost too comfortable. Virginia Tech came out ready to fight and scored within the first 20 seconds of the half to make it a three-goal game. Once the Hokies scored a free-position goal to make it an 11-8 game, head coach Acacia Walker decided to replace Zoe Ochoa in net with freshman Lauren Daly.

“Zoe just wasn’t seeing the ball like normal,” Walker said. “We have a great backup in Lindsey [Reder] and Lauren, but it was Lauren’s chance today and I think it was the right decision. Lauren went in and did pretty well.”

Daly stood strong in net, but the Hokies got one past her to narrow BC’s lead to two goals. The Hokie bench danced and cheered as the Eagles stood silent. The Eagles struggled offensively during a 13-minute scoring drought, but the defense contained VTech’s offense to ensure its lead was kept intact.

“I think we always knew…I mean, they have four top scorers who are unbelievable,” Walker said. “They really didn’t have it going in the first half, but I knew for sure that they would figure it out, which they did. That comeback wasn’t a surprise to me.”

Margolis ended the scoring drought to make it a 12-9 game. In order to stop a BC offensive push, the Hokies’ head coach Megan Burker decided to challenge the legality of Margolis’ stick’s pocket. The refs concluded, after brief deliberation, that the goal stood. Contrary to VTech’s coach, the Eagles could not be stopped.

With less than six minutes remaining, Mannelly scored another to get BC’s lead back to four. Three minutes later, Mannelly fired one across the arc to Kenzie Kent, who launched one into the net as Sieger missed the diving save, making it a 14-9 game with 3:30 left in the game.

After a penalty in the arc, the Hokies had a free-position goal with two minutes remaining. Meghan Macera scored her fifth goal of the game to get her team within four. But Kara Magley would not let VTech make another comeback as she snagged a pass from Emma Schurr and sent a slow bouncer into the goal.

The Eagles offense maintained possession for the remainder of the game and captured a 15-10 win in honor of Crowther. No player took control. Each Eagle generously assisted her teammates, making sure everyone was involved. With the Crowther family looking on, the team put up an honorable fight to the finish.

lacrosse virginia tech womens lacrosse acacia walker Tess Chandler kate rich
‘If a Ginger Has a Beard, Does That Make Him a Redneck?’
Despite Score, Wade and Towles Look Locked In During Spring Game 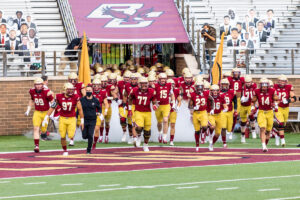