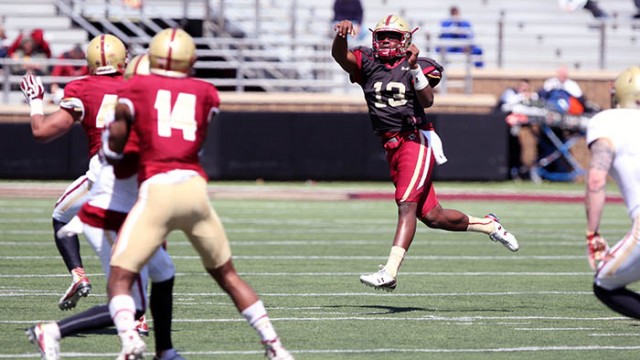 Sweeney, Smith, Brown Give Hope For BC’s Future on Offense

Points were hard to come by in Saturday’s Jay McGillis Memorial Spring Football Game, the first of the Steve Addazio era, but that doesn’t mean there weren’t bright spots offensively for the Maroon and Gold teams.

Although it would’ve been comforting to see a touchdown as some sort of signal that new offensive coordinator Scot Loeffler’s scheme is a step in the right direction, there were other signs of life on the offensive end that were promising.

With the running game stagnant for both teams, quarterbacks Patrick Towles and Darius Wade took to the air to attack opposing secondaries. Towles looked like a transfer who is still working out the kinks in the offense—he missed a couple throws and was constantly chased out of the pocket.

Wade, on the other hand, looked crisp and poised in the pocket, completing 13-of-19 passes for 181 yards. His favorite target, and potentially the Eagles’ new secret weapon, was 6-foot-5, 246-pound tight end Tommy Sweeney.

“I wish I would’ve had Sweeney on my team. Unfortunately, Darius took him away from me,” Towles, a fifth-year transfer from Kentucky, said.

Sweeney is a walking mismatch for defenses, and he displayed his strength, speed, and hands on Saturday afternoon. The sophomore hauled in four passes for 57 yards, including a 31-yard catch-and-run that set up a field goal as time expired before halftime.

“Tight ends are very big in this league, so he’s going to be a huge help for us,” Wade said.

Last year, the position was a relatively weak one for Addazio’s squad. In 2015, tight ends totaled just 75 receiving yards as a group. But over the last couple weeks of practice, Addazio and his staff have raved about Sweeney’s potential for a breakout year because of his stellar catching ability and size.

Jeff Smith, the QB-turned-receiver who started in place of the injured Wade later in the season, also excelled in the receiving corps, pulling in four passes for a total of 51 yards. For those who thought he drops too many passes, he made a convincing case that he has the hands to compete as a wideout.

After Towles and Wade took their reps as the first-team QBs, Addazio opted for John Fadule and grayshirt freshman Anthony Brown to get some action in the second half. Brown, widely lauded as the quarterback of the future for this program, had an up-and-down day.

His first pass in a BC uniform went for 35 yards down the sideline, one of the longest completions of the afternoon. But his second pass was read perfectly by redshirt freshman Jimmy Martin, who picked off the throw and took it back 15 yards before Brown trucked him out of bounds.

“I shouldn’t have hit him because it was a spring game,” Brown said. “But I was always told as a young kid, ‘If you throw a pick, you gotta finish your mess.’”

Sure, in some ways, the game itself was a mess considering both offenses managed just eight combined points. But it also offered a glimpse of the future, which seems increasingly bright—even if the progress is inch-by-inch.