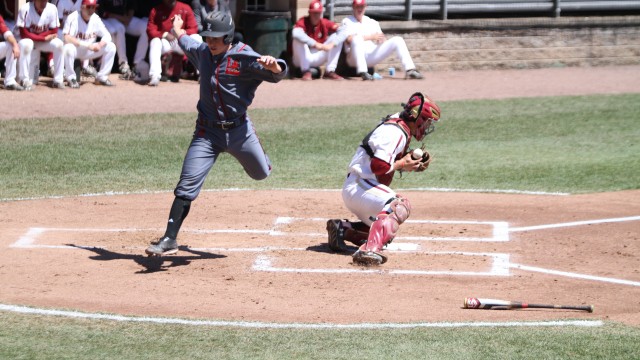 If someone told you before this past weekend that Boston College baseball would take two of three games from the No. 4 team in the country, anyone would be thrilled. Well, that’s just what happened—BC won its weekend series against the University of Louisville, No. 4 in the country. Despite that, though, a disappointing 6-4 loss on Sunday left a sour taste in the Eagles’ mouths.

The Eagles (21-15, 7-12 Atlantic Coast) might have fallen to the Cardinals (31-9, 14-7) 6-2 in the final game of their three-game series, but they still took the series with two wins on Friday and Saturday. So while BC head coach Mike Gambino was disappointed with Sunday’s result, he took positives away from the series as a whole.

“Ultimately, looking back on the weekend, two out of three is great,” Gambino said following the loss. “But right now, I’m thinking about the fact that we just lost a baseball game.”

Junior Mike King had an unusually poor start against the Cardinals, as he didn’t make it through five innings. Over a dozen scouts were in attendance to watch King duel with opposing starter Kyle Funkhouser, who is projected to be a late-first- or early-second-round pick in the 2016 MLB First-Year Player Draft. On this occasion, Funkhouser had the upper hand. King had problems locating his fastball throughout the start, as he walked three batters, beaned another, and threw two wild pitches.

King was yanked immediately after giving up a home run to shortstop Devin Hairston for the fifth run of the game, but the bullpen settled down nicely to keep the Eagles in it. Lefty Zach Stromberg threw two innings of relief surrendering only a run, and freshman John Witkowski tossed the final 2 2/3 innings to keep the Cardinals at bay.

In his best outing of the season, Witkowski was excited by the team’s performance over the weekend and the promise that the young arms of the bullpen showed in the defeat.

“A loss is a loss, but looking at the weekend as a whole, it was very good for us,” Witkowski said. “We won the series, and we’re taking that as a positive going into this week.”

Though it was going to be very tough for the Eagles to sweep a team as good as Louisville anyway, they didn’t do themselves any favors with a number of mental gaffes in the field and on the bases.

With a runner on first base and nobody out in the top of the fourth inning, Louisville’s Danny Rosenbaum hit a screaming line drive directly at Gabe Hernandez in left field. A hard-hit ball directly at you is one of the toughest to read off the bat. Hernandez learned that the hard way. He took a few hard steps in before freezing, as the ball sailed over his head and off the bottom of the wall. The run scored from first, the Cardinals added another run in the inning, and Hernandez was pulled in favor of freshman Dominic Hardaway in the next inning.

On the bases, BC was picked off first base twice. The first time, Johnny Adams had just reached first on a single to right field, but Funkhouser caught him leaning. He faked a throw to third base before wheeling around and gunning Adams at first to end the BC rally.

Gambino is never one to defend baserunning mistakes by his players, but he went to bat for Adams following the game.

“I think it was a balk,” Gambino said. “I’ll defend Johnny on that one. The umpires didn’t think so, but we’ll agree to disagree.”

The second occasion, however, had Gambino much less accepting of the mistake.

Logan Hoggarth led off the bottom of the seventh inning with a walk, and the Eagles were looking to string together a few hits in a row off of new pitcher Anthony Kidston. With Hardaway at the plate, Kidston threw a pitch in the dirt that catcher Will Smith blocked, but the ball settled a step or two away from him. Hoggarth took an aggressive lead off of first base, and Smith threw a dart to Rosenbaum at first to nab Hoggarth.

Though Hardaway eventually struck out, BC loaded the bases later in the inning, only for Louisville to escape the jam unharmed yet again.

With the remainder of its schedule against local non-conference opponents and lower-tier ACC opponents, the Eagles have a chance to string together enough wins to make some noise in the ACC Tournament—and, perhaps, the NCAA Tournament. If the series against Louisville is any indication, the Birds might be getting hot at just the right time. Sunday’s result might have been a single step back, but the series overall was a few steps forward.