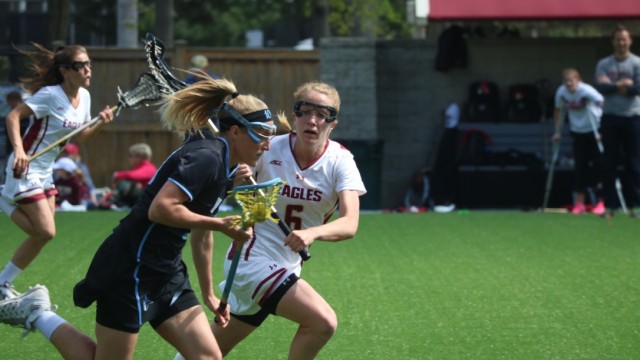 Six seniors took the field for the last time at Boston College on Saturday, as lacrosse finished off its regular season against Johns Hopkins in front of a spirited crowd. This was just the second time the two teams have met, with the Eagles taking the first-ever meeting in last year’s season opener against the Blue Jays.

BC came in riding a three-game winning streak at the most crucial point in the season. With big wins previously coming against Dartmouth, Virginia Tech, and Harvard, the Eagles appeared to be clicking at the right time. But BC  (10-7, 2-5 Atlantic Coast) faltered after a strong start, falling 12-9 to the Blue Jays (10-7).

The Eagles came out firing in the first half on their way to a 7-3 lead at the break. Sarah Mannelly powered BC’s attack, as she tallied a goal and three assists. Seniors Kate Rich and Caroline Margolis each tallied a point as well for BC in their last game at the Newton Lacrosse Field. Zoe Ochoa held down the fort in goal with five terrific saves in the first half for BC. Ochoa’s play was key in helping the Eagles stretch their lead out to a four-goal margin, despite the immense pressure provided by the Blue Jays’ attack in the first half.

BC carried its momentum into the second half, as Tess Chandler scored 3:28 in to make it 8-3 Eagles. But Johns Hopkins responded ferociously with three unanswered goals, two coming from Shannon Fitzgerald and the third from Emily Kenul, making it an 8-6 game with 20 minutes remaining. The Eagles called a timeout to gather themselves, and Mannelly won the draw out of the timeout, taking the ball quickly all the way down the field before Hopkins goalie Caroline Federico denied her shot. This short sign of life by the Eagles was succeeded by two more goals for the Blue Jays, making it an 8-8 game with 16 minutes remaining.

Just a minute later, Johns Hopkins took its first lead, 9-8. The veteran Mannelly responded with an immediate goal to tie the game once again, igniting the crowd of Eagles’ faithful. Fitzgerald silenced the crowd with yet another goal for the Blue Jays, sneaking a shot past Ochoa in the upper right corner to make it 10-9 with 12 minutes remaining. Hopkins then added two more goals, each coming from Miranda Ibello, to stretch its lead to 12-9 with seven minutes remaining, forcing head coach Acacia Walker to replace Ochoa with Lauren Daly in net.

Looking to chip away at their deficit, Carly Bell won a ground ball for the Eagles, and they controlled the ball deep in Johns Hopkins’ zone. After throwing the ball back and forth for close to two minutes while looking for a shooting lane to open up, Mannelly finally fired a shot on goal with 5:20 remaining in the game. The ball went wide and out of bounds, and Johns Hopkins won back possession of the ball. This was the Eagles’ last chance to make it a game down the stretch.

BC struggled mightily in the second half, as its high-powered offense was held to just two goals. The game was lost in draw controls, as Hopkins dominated BC 14-9 on draws, resulting in the Blue Jays controlling possession for much of the game. The Eagles were unable to get anything going down the stretch, with the ball in their defensive zone for almost the entire last 15 minutes of the game.

Kenul was they key to Johns Hopkins’ potent second-half attack. The Brookeville, Md. native tallied three goals and two assists on six shots. For the Eagles, Mannelly was the star as she scored two goals and added two assists. Junior Kate Weeks scored her 38th goal of the season for BC, giving her the team scoring title for the regular season.

The Eagles will head down to Blacksburg, Va. for the ACC Tournament on Thursday, where they will take on Syracuse on Thursday at 5 p.m. on ESPN3. They’ll look to strengthen their resume for the NCAA tournament. But even as the No. 16 team in the nation, the Eagles may need to do a little more work in order to guarantee a spot in the 26-team field. 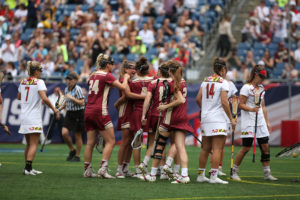 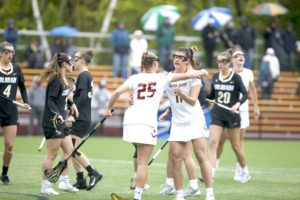