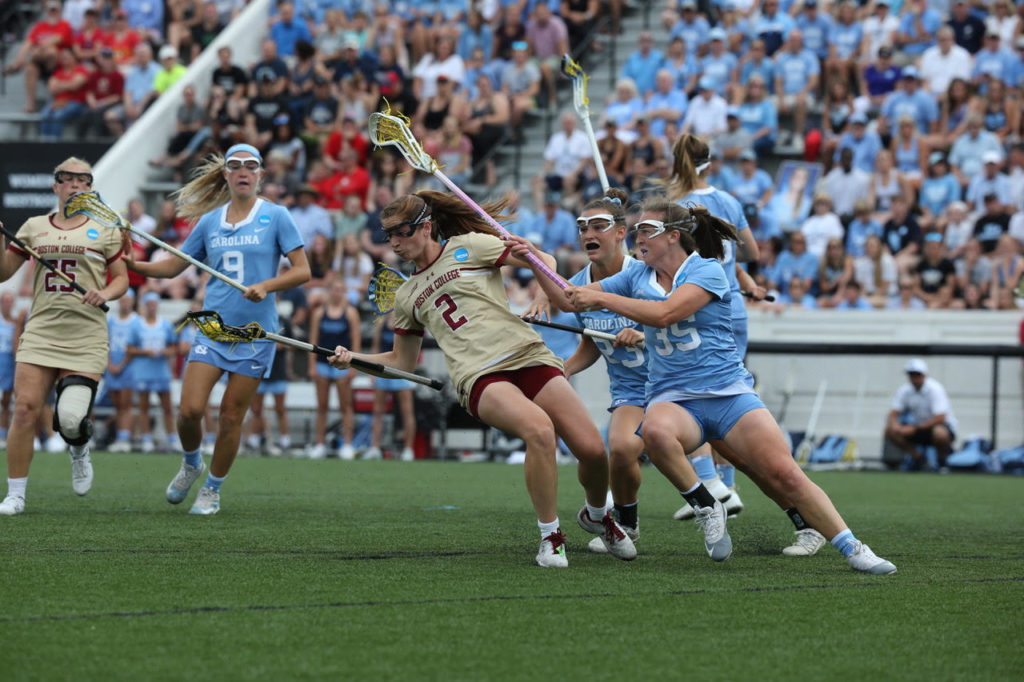 Three weeks ago, Boston College lacrosse ended up on the wrong side of history. The Eagles became the first team in NCAA women’s lacrosse history to lose three straight National Championships. Yet the fact that they were even in that position is telling.

Over the course of the past three years, head coach Acacia Walker-Weinstein has helped turn a mediocre ACC program into a perennial contender, no easy task in a sport as top-heavy as women’s lacrosse—Maryland and Northwestern have combined to win seven of the last 10 national titles. As Walker-Weinstein stated in her National Championship postgame press conference, BC wasn’t a lacrosse school four years ago. And now it is. The 2019 campaign cemented the program’s reputation among the sport’s elite.

Just like the 2019 ACC Championship, five goals separated BC and UNC at the 19-minute mark of the programs’ Final Four matchup. Only this time, it was the Eagles who found themselves in the hole. Flipping the script, BC’s “Big Three”—Sam Apuzzo, Dempsey Arsenault, and Kenzie Kent—got on the board, and the Eagles closed out the half on a 6-2 run, trailing just 8-6 at the break. Cara Urbank, who finished with a team-high four goals, jumpstarted a 4-0 BC run near the start of the second period before both sides traded blows the rest of the way. Jamie Ortega tied the game at 14 goals apiece with 64 seconds remaining in regulation, and then Tar Heels goaltender Elise Hennessey saved a potential game-winning Sam Apuzzo shot.

The senior’s moment to shine would have to wait—two and a half extra frames to be exact. Apuzzo wrapped around the net, head faked, and then continued to cut inside before backpedaling, switching her stick to her left hand, and sprinting toward the cage for the biggest goal of her career. She twirled in the air, as BC advanced to its third straight national title game.

In what was a 2017 National Championship rematch, the Eagles established a 2-1 lead, only to go quiet offensively the next 10 minutes of play. Maryland’s fourth-ranked scoring defense repeatedly collapsed on BC’s attackers, swallowing up the likes of Apuzzo, Arsenault, and Kent. And when the Eagles finally did get a shot on net, Taylor was there to make stop after stop. Lauren Daly held her own on the other end of the field, yet BC’s scoring drought set the stage for a 7-2 Maryland run to end the half.

Identical to the 2017 matchup, Kent flipped a switch in the second half, ripping twine four times during the final frame. Apuzzo and Arsenault chipped in too, helping the Eagles cut their deficit to three twice before the five-minute mark. Both times, however, Tewaaraton Award finalist Jen Giles answered with a goal. Kent tacked on a pair of scoring plays in the final minutes to make it a two-goal game, but Maryland survived to win its 14th national title. Walker-Weinstein’s team, on the other hand, was left without a trophy for the third year in a row.

BC finished the season with six players above the 40-point mark and four Intercollegiate Women’s Lacrosse Coaches Association (IWLCA) First Team All-Americans—the most in the country—but Apuzzo was the star of the show. The 2018 Tewaaraton Award winner recorded 100-plus points for the third straight season, logging a career-high and nation-leading 94 goals along with 30 assists. She also caused 35 turnovers, scooped up 40 ground balls, and won 191 bouts in the circle. Both the ACC and IWLCA Attacker of the Year, Apuzzo added to her highlight reel with a bounty of big-time performances and plays this season, most notably the aforementioned double overtime game-winner against UNC in the Final Four.

With the top three picks in the Women’s Professional Lacrosse League (Apuzzo, Arsenault, and Kent), the Eagles’ offense attracted a great deal of attention, both from opponents and the national media. Often forgotten, though, was Urbank—and she capitalized. The junior built on her encouraging 35-point sophomore campaign and emerged as BC’s fourth scoring option in 2019. Urbank was a hat trick machine, notching 12 on the season—including four straight—and ultimately rounded out the year with 55 goals. She scored a team-high four times in the Eagles’ Final Four victory over UNC, sparking a pair of three-plus goal runs.

Kent went 622 days without playing for BC lacrosse but didn’t lose a step. After redshirting the 2018 campaign so that she could play a full season this past spring, the graduate attacker quickly returned to form, recording seven or more points in four of the first five games of the season. When all was said and done, she closed the year with 127 points—the most in the country—a statline capped by a five-goal National Championship performance.

2) BC Makes Home for Itself Atop Inside Lacrosse Poll

The Eagles entered 2019 at the top of the Inside Lacrosse Poll and stayed there practically all season. In fact, BC occupied the No. 1 spot 13 of the 15 weeks, as Walker-Weinstein’s team rolled to its second consecutive 17-0 start and ACC regular season title. Unfortunately for the Eagles, one of those two weeks marked another disappointing runner-up finish.

After splitting time with Zoe Ochoa during the 2017 NCAA Tournament, Daly had the net all to herself the following year. She lived up to the task, allowing just 9.71 goals per game. Heading into her senior year, Daly had firm control of the starting job, but an early-season injury allowed Abbey Ngai to take the cage. Ngai, a sophomore, shined, posting a .484 save percentage. Yet, when it mattered most, she faltered, conceding six consecutive goals to UNC in the Final Four. Daly came in and played BC’s remaining NCAA Tournament minutes.

This spring, the ACC Tournament came to Alumni Stadium, where the Eagles played their final two regular season games, including their Senior Day win over Louisville. In the span of five days, all eight ACC teams suited up in Chestnut Hill for a chance to book their trip to the conference championship. BC rolled past the Cardinals, then defeated Syracuse in dramatic fashion—closing a three-goal deficit with eight minutes left in regulation—before ultimately falling to UNC in the title game for the second straight year.

Apuzzo was certainly qualified to become the fifth player all-time—and the first from a school not named Maryland or Northwestern—to earn the Tewaaraton Award more than once in their career. But, on the sport’s biggest stage, Terrapins goalie Megan Taylor was just that much better. The four-time Big Ten Goaltender of the Year tallied seven first-half saves and held the Eagles to a season-low 10 goals, stealing the spotlight from Apuzzo and BC’s offense.

Apuzzo might have been denied by Hennessey at the end of regulation, but she wasn’t about to pass up another opportunity at a game-winner in the NCAA semis. With under two minutes remaining in the final frame of double overtime, she capped the Eagles’ six-goal comeback.

It’s only fitting that Apuzzo—the program’s all-time leader in points (397), goals (283), and draw controls (458)—would occupy two spots on this list. Midway through the season, the senior went behind-the-back, tucking the ball into the top-right corner of the net, putting UVA on SportsCenter’s Top 10 segment for all the wrong reasons.

Perhaps the highlight of her second-half outburst during the National Championship, Kent charged from behind the cage, spun—dropping Maryland’s Doherty in the process—and got Taylor to leave her feet with not one, but two stick fakes. From there, the graduate attacker ripped twine with a helpless Doherty at her feet, cutting BC’s deficit to three.

Unlike the last two years, BC won’t necessarily be a lock for the Final Four in 2020. The Eagles are saying goodbye to their most prolific senior class in program history—a group of nine players that guided the team to a pair of ACC regular season titles, three straight national title game appearances, and a 71-20 record. With UNC and Syracuse threatening, the ACC is up for grabs, but that doesn’t mean BC doesn’t have the firepower to keep the ball rolling.

The Eagles are returning Urbank and Sheila Rietano, as well as Ngai, all of whom were All-ACC Second Team selections this season. Not only that, but Walker-Weinstein is also bringing in an array of talented recruits, such as five star defender Sophia Taglich and midfielder Ryan Smith. And with a proven coaching staff—which now features Apuzzo as a full-time graduate assistant—BC will likely facilitate a smooth transition this coming year. The Eagles’ 36-game regular season win streak might come to an end, but there’s no question they have a chance to be in the thick of things next May. 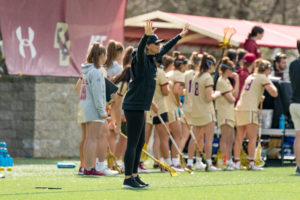