Home » Addazio, BC Should Fight to Bring Back Satellite Camps 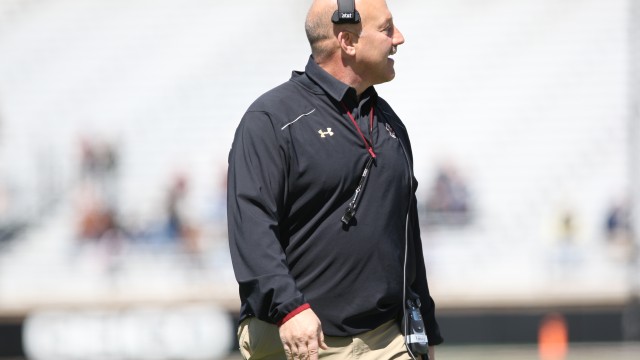 Addazio, BC Should Fight to Bring Back Satellite Camps

To the untrained eye, it looks like a good thing. That is, if you hate Jim Harbaugh.

I can understand if you do. This man is brash, cocky, fearless, sometimes mouthy, and, worst of all, the leader of the Michigan Wolverines—a program that I am obligated to remind you has won one national championship since full integration (1997) yet whose fans act as if they are the kings and queens of the college football world. The way he screams at officials and pouts up and down the field is irritating to an unreal level. And Harbaugh himself hasn’t even won anything yet!

It’s Harbaugh’s recruiting that gets under the skin of most people in the college football world. He accepted a challenge to climb a tree. He has slept over the house of a kicker who had already committed to Penn State. Hell, he even Netflixed and Chilled with a 4-star recruit! No, not the kind you might (hope to) do when your Walsh 8-man is empty. The actual one. With cookies and milk.

Nothing pisses off college football’s establishment more than Harbaugh’s insistence to set up satellite camps across the country to sell the already well-known Michigan brand. But, while they cannot control Harbaugh’s individual actions, the old and cranky men who run the sport—namely, those from the Southern schools—could shut him down.

About two weeks ago, a slight majority of the FBS conferences—namely, the SEC, ACC, Big 12, Pacific-12, Mountain West, and Sun Belt—voted to permanently ban satellite camps, against the wishes of Harbaugh and the Big Ten, American Athletic, Conference-USA, and Mid-American. (Note that the Pac-12 claims its representative voted incorrectly.) The ban means that all conferences will likely follow the rules of the ACC and SEC, in which, even when invited, coaches could not step outside a 50-mile radius of campus.

Naturally, Harbaugh was upset. So were several other coaches, even ones in the ACC. Wake Forest’s Dave Clawson said that the camps only help his program, which, despite playing in talent-rich North Carolina, isn’t as nationally known.

“I don’t think we should do anything that makes us less competitive nationally,” Clawson said last year, when legislation was first proposed.

Notre Dame athletic director Jack Swarbrick echoed Clawson’s statements through the most basic and classic reasoning: It’s another reason that gives backing to the national narrative that the NCAA is a bunch of crooks. Preventing coaches and student-athletes from freely having an opportunity to go on the open market and choosing their school or players may open up another round of antitrust suits.

If anyone should be leading the outrage charge, it’s Steve Addazio and Boston College football.

(Note: Addazio has been reached for comment and has not yet responded by time of publication.)

There’s a few reasons for this, and it starts with proximity. As a member of the ACC, Addazio has already been burned by his inability to stretch outside that 50-mile mark thanks to the conference’s self-imposition. The ACC does this because, at its core, it’s a Southern league with schools smack dab in the middle of some exclusive recruiting hotbeds. No, they’re not from the big three—Texas, California, and Florida, save for Miami—but there’s still a load of blue-chip talent in places like North and South Carolinas, Georgia, and even Western Pennsylvania.

That’s not the case in BC’s 50-mile radius. Thanks to SB Nation’s Nebraska affiliate Corn Nation, we can see exactly how many recruits from 2002-14 fall into that sweet spot.

Hint: it’s not many.

First, we must adjust for “blue-chip recruits,” or those who received a 4- or 5-star from some arbitrary scaling system. These are the guys who are supposed to make or break a program with their incomparable amounts of physical strength and athleticism (A quick reminder that we are rating 17-year-olds).

In some areas, there’s no problem in restricting coaches to that 50-mile radius because of how big the talent pool is. If you examine the radii around North Carolina’s four ACC schools—Wake Forest, Duke, North Carolina, and North Carolina State—you’ll find that there were 27 blue-chip recruits (20 were 4-stars, seven were 5-stars). Down near Miami, there were 22 blue chippers (five 5-stars). Around Georgia Tech, there were a whopping 41 who qualified (28 were 4s, 13 were 5s). Not all of them went to the schools in their areas, but the coaches there had easier access to them.

Meanwhile, BC is screwed. In its 50-mile radius, which stretches as far west as Worcester, as far north as Manchester, N.H., and as far south as Providence, there have only been 10 “blue-chip prospects,” all of them 4-stars. Of those 10, BC has successfully recruited five of them: Will Blackmon, Albert Louis-Jean, Gosder Cherlius, Jim Unis, and Mark Spinney. The other five were snatched by Michigan, North Carolina, Georgia, Vanderbilt, and Maryland.

On the other hand, BC has struggled in attacking entire states in which ACC schools lie, much less its direct radii. The Eagles have only had four blue-chip recruits come from the 50-mile radius of another school in the ACC. All four of them—John Elliott, Will Thompson, Steele DiVitto and Brian Toal—came within the reach of Rutgers, a school that isn’t even in the conference anymore. After that, BC has stolen two blue chips in Pennsylvania and two in Virginia.

Now, let’s take a couple of things away from that. There are some unavoidable factors here that absolve BC of some blame. Four of those five schools had to work under those rules limiting coach travel (at the time, Maryland was in the ACC). No matter where you go, people are going to know Michigan and Georgia football. Moreover, we can’t blame Addazio for any of these shortcomings—none of those blue chippers within the wall were from the time when he recruited at BC.

Yet Addazio’s strategy of a BC coach building that wall around Massachusetts and the New England area isn’t one that was unique to him. The truth is that it’s hard to find reason to build a wall when there’s nothing to keep inside.

Now, when you open it up to 3-star recruits—which, mind you, are a big dropoff in the recruiting world—BC performs a lot better given the amount of solid prospects there are in New England. Additionally, BC has shown an ability to snag incredibly talented 3-star recruits from states in which ACC rivals reside. For example, Andre Williams is from Maryland, Harold Landry from North Carolina, and Kamrin Moore from Virginia. BC’s coaching staff should be commended for developing these players (and others) into elite prospects.

But given that New England high school football isn’t as highly regarded in the national eye—nor should it be—it’s hard to say how these kids will perform going up against players who spent their time in the South or West smashing each other. And relying solely on a coaching staff without mixing in the occasional elite and natural talent can come back to bite some players.

It’s Harbaugh’s main objection, however, that should be a factor in Addazio’s argument. Harbaugh’s brother, John, the head coach of the Baltimore Ravens, weighed in on that issue to ESPN.com.

“What are we arguing against?” the elder Harbaugh said. “An opportunity for young athletes to take a look at colleges from other parts of the country, especially those that aren’t in a socio-economic situation where they can travel all over the country with their parents and look at schools.”

These camps provide an opportunity for coaches from across the country to access areas they’d never get a foot in. It’s especially helpful for ones that don’t have as large a footprint. Perennial Big Ten bottomfeeder Northwestern and the MAC’s Ball State both struggle to attract high-end recruits. Yet when Northwestern’s Pat Fitzgerald and Ball State’s Pete Lambo spoke at a camp hosted by Harbaugh in Ann Arbor, they helped spread their message and get to recruits that Michigan might not be interested in.

That’s something that would help BC greatly. Addazio has a unique recruiting pitch shared only by Northwestern and, in a little more of a stretch, Stanford. At BC, you can get a top-flight education, better than many other FBS schools, while still being in a large city and not a farm village in rural Indiana.

Since so many of the best recruits don’t live in the area, it’s expensive for them to make the trip to Boston. Giving Addazio the opportunity to go down South—or, honestly, even to New Jersey, BC’s hottest and most exclusive recruiting bed of late—benefits the program and the players who want to be seen by as many recruits as possible. Just ask the hundreds of players, former and current, who have tweeted out how ridiculous this ruling is. It’s just information and opportunity, that’s all. Then again, when has the NCAA ever taken into account the well-being of its players? (No, free WiFi doesn’t count.)

As a Northern school allied with Southern schools by conference and forced to play under their rules, Addazio and BC must stand up for what’s good for themselves. It’s the only way BC will have any chance of making the jump to becoming a great program.