A Coast-to-Coast Bike Journey Measured in Stories, Not Miles

After graduation in May, Paul Sherban, MCAS ’16, doesn’t have stereotypical plans. He won’t immediately be getting a job, nor will he be attending grad school.

Rather, he will be biking from Lancaster, Pa., to an undetermined destination on the West Coast. Along the course of this ride, Sherban will be interviewing and capturing the stories of Americans across the nation and publishing them in a brand new project of his own creation, operating under the name of Untold Stories.

“Right now, [Untold Stories] doesn’t have a solid name or a solidified format, I just want to get out there and do it,” Sherban said. “But I know that I want to meet people that I’ve never met before, and more than that, I want to record their stories. I want to create this collection of voices, because all of it is so real and is truly American.”

In other words, Sherban hopes to be a storyteller, an agent for connecting the long and diverse narrative of the American spirit.

“I want to serve as a middleman between people and the world, I want people to tell me their stories,” Sherban said. “I want to capture the American voice, because it is all a part of the human experience.”

Sherban is looking forward to encompassing a breadth of the human experience—all 4,000 miles of it.

“I love talking to people,” he said. “And I’m really excited when I think about projects like this.”

This trip began as an idea planted in a dinner conversation Sherban had with an old friend. Complaining that they didn’t want to get jobs after college, Sherban’s friend suggested that they run across the country to get away from it all and to experience the “real America.”

Although the trip has been changed from running to biking (for physical and logistical purposes), and Sherban’s friend is no longer able to join him, Sherban is still eager to saddle up for the ride.

“I think biking across the country is definitely the move,” Sherban said. “This whole project is about other people, so I think that by biking I can move quickly enough to progress, but not so fast that I miss out on things. Plus, I need to be alive if I want to talk to people at the end of the day, which I wouldn’t be if I [were] running.”

Although Sherban is currently going at this project alone, he is actively searching for a partner to follow him in his adventures. Unfortunately, his original partner is no longer able to make the time commitment to the trip, and Sherban has been forced to approach the trip as a solo venture. Though not necessarily enough to alter his plans to bike, Sherban certainly doesn’t underestimate the importance of a partner.

“This makes me realize how much more planning I need to do,” he said. “This is the stuff that’s really important.”

Logistical details aside, this trip is meant to create something uniquely human and distinctly American. Although he hopes to end in the vicinity of San Francisco, Sherban will be taking the trip one day at a time. After all, he is biking from September to March, and doesn’t want to lose sight of the overall goal of Untold Stories.

“This trip is more about the people than the biking,” he said. “I’m not looking for anything specific, nor do I have any expectations. I just want to prompt people and see what they have to say in an indiscriminate way.”

While Sherban’s collected and deliberate manner served him well, there was no hiding the hint of nervousness that he had throughout talking about the process.

The physical component obviously being essential to the success of Untold Stories, Sherban is justifiably anxious about the concept of pedaling across a vast country with no long-term plan and well over 4,000 miles to cover. Along with this worry, however, comes an incentive to succeed.

“I’m definitely concerned,” he said. “But I know that, hopefully, once I find another person to ride with me, I’ll stay motivated out there on the road to keep moving and to keep the project going.”

As the old cross-country biking adage goes: “You’re going to wake up in one place and fall asleep in another, and it’s what you do in the miles between those two points that matters.” 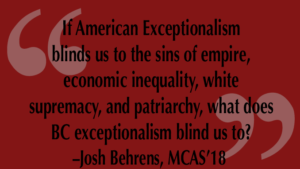 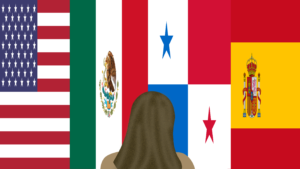