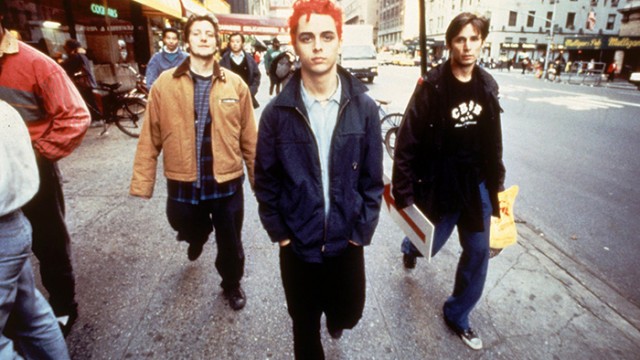 Evaluating The Magic of Throwback Tracks

In 2008, billions of flimsy, rainbow-colored Silly Bandz flew off of toy store shelves at record pace. Lindsay Lohan had just started her descent into the dark depths of that all-too familiar child-star-turned-troublemaker trope. The stock market also went straight down the toilet, and then-Republican running mate Sarah Palin probably said something totally inaccurate about the proximity of her back porch to Putin’s pride and joy. Despite the aforementioned flaws permeating society and pop culture (hey Crocs, what’s good?), 2008 marked a rather incredible year for the entertainment industry.

Sure, this particular calendar year brought the release of the greatest acting performance in the Batman franchise history—at least, it’s the uncontested best in the eyes of all of those who can truly appreciate an outcast carnival villain with debilitating daddy issues. Don’t forget that Slumdog Millionaire made its impressive box office-busting debut in 2008 as well.

But that’s not what I’m talking about. Considering the 2008 release of massive fan favorites like Beyonce’s viral “Single Ladies (Put a Ring on It)” and Coldplay’s compelling “Viva La Vida,” which dominated music charts for months on end, the music industry had a whole lot going for it back then, too. The way I see it, the mid-to-late ’00s were the golden age for good, guilty-pleasure playlists. Though perhaps not coming off of the most wonderful LPs in the world as far as well-produced albums and quality lyrical content are concerned (here’s looking at you, “Sexy Can I”), these turn-of the-century songs gave way to some of today’s greatest throwback jams.

If a music lover is looking to reminisce about the good old days spent dominating dodgeball at recess or actively avoiding the opposite gender at lame school dances, then my favorite Spotify playlist I have compiled thus far—appropriately named “I’m Sorry You Peaked In Middle School”—has got ’em covered. It boasts fantastic tunes from The Fray, Ray J, and everything in between. The four-hour-long list jumps from one genre to the next with singles like the annoyingly infectious “Pocketful of Sunshine” and “American Boy” by Estelle featuring a pre-Kardashian-contaminated Kanye West.

In an astonishing feat of musical talent and lyrical genius, a well-known rapper released his 2007 album Epiphany. Truly poetic, one of the standout singles features the following heartwarming and totally grammatically correct refrain:

“I’mma buy you a drank / Then I’mma take you home with me. I got money in the bank / Shawty What you think ’bout that?”  T-Pain for lyricist of our generation, who’s with me?

If this song doesn’t fully embody the spirit of fine art itself, I don’t know what does.

In T-Pain’s eloquently entitled “Buy U a Drank (Shawty Snappin’),” it’s a real tossup whether the abbreviated pronoun “U,” intentional misspelling of the word “drink,” or the puzzling parenthetical makes the song so great. In all seriousness, however, I’d argue that it’s none of those.

Maybe the single greatest element of a throwback track isn’t any specific aspect of the music itself. Perhaps what makes “Mr. Brightside” the best or “Move Along” so awesome is the memories associated with the days radio DJ’s used to play it on loop. It’s the small stuff you remember distinctly when you hear songs like the racy “Stacy’s Mom” at a party—deja vu flashes visions of family vacations, days spent trading your P!nk Hit Clip for NSYNC ones, and weeknights screaming the lyrics to “Good Riddance (Time of your Life)” on your way home from winning a field hockey championship. But, thanks to variety—the spice of life that provides unique experiences that differ drastically from person to person—it’s all relative.

“Five for Fighting,” a guy I know said recently with a laugh, naming his favorite throwback band without any semblance of hesitation. “‘Superman’ and ‘100 Years’ are straight-up jams, Hannah, you’ve got to admit it.” After giving the songs a good listen for the first time since I can remember, I admit (begrudgingly) that he was right.

Once upon a time, The All-American Rejects hoped to give you hell. Taylor Swift’s dad was a total jerk when trying to control her Shakespeare-inspired love story. Billie Joe Armstrong applied some heavy black eyeliner before taking an angsty stroll down a certain boulevard of broken dreams. And now, whatever was going on as these songs played steadily in the background of a person’s past can be relived with a swift tap of a replay button.

modstock t-pain
‘Barbershop,’ Bieber, and ‘A Bigger Splash’ This Weekend in the Arts
Birdball To Retire Pete Frates’ Number 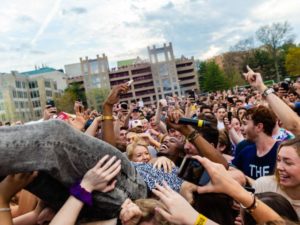