Finding Different Pieces of Myself

People don’t believe me when I say I’m an introvert. In fact, more often than not, I receive playful teasing and ridicule as a response. “No way! You’re like, so loud, I mean, just the friendliest person. You’re definitely an extrovert.” My frustration with other people telling me how to define myself is another rant for another time. The point that I’m trying to make is that so much of what I do in my life fails to fall on the introverted side of the personality spectrum (not that there’s anything wrong with that), and I now owe that in large part to arts clubs at Boston College.

So what, a girl goes to college and comes out of her shell some—what else is new? Honestly, not a lot of my life story is remarkably different or insightful. Growing up, I somehow managed to pull off being simultaneously the nerd, the horse girl, and the scene kid, which unsurprisingly did not earn me many friends. I spent most of my time reading or running errands with my mom, blissfully avoiding the terror that was the real world and its inhabitants.

Once I started attending an all-boarding high school, however, my happily lonely lifestyle was upended by roommates, forced grade bonding, and sports team scavenger hunts. I had none of the solitary refuge I still depend on in order to remain socially functional, much less fun. The newfound stress in conjunction with some biological factors led me to be diagnosed with general anxiety in my sophomore year. In a better place to understand my mentality, if not prepared to work on bettering it, I did what any ex-scene kid would do: I turned to music.

In high school, I took songwriting and recording classes, learned to play the guitar, and forced myself to expand my music library beyond the Blink-182 anthology before the year was out. I even joined SAPA, the Student Association for the Performing Arts, in hopes that I could put my newfound, maybe slightly-better-than-mediocre skills to the test in a public setting, drastically outside my comfort zone. Before graduation, I had performed in front of other SAPA kids, the entire school in community meetings, and even at the regional Special Olympics finals that we hosted on campus.

Yet this isn’t the part of the story where I “blossomed,” or “found my confidence in music,” or whatever. I hated every performance that I participated in, from the nearly sickness-inducing nerves I felt beforehand to the mental replay of all my (usually insignificant) mistakes for days afterward. People were starting to recognize me as someone more outgoing, but the label felt like a mask. I didn’t enjoy doing any of the things I led others to believe defined my high school experience.

Coming to BC, I entered assuming that I would audition for an a cappella group, and maybe play at an open mic night or two. The friends I had found while performing were genuine, even if my love for the activity was not. Upon arriving on campus, however, I realized how genuinely competitive those auditions would be. I had little to no chance of making an a cappella group, and surely I would drive myself insane comparing myself to the others performing with me in other venues.

In some way, I believe that I actually owe BC’s performing arts groups for being better than I was. I’m not bitter that I haven’t had the chance to participate yet. I’m relieved that I didn’t force myself into another year of “trying to leave my comfort zone” in a way that continually made me uncomfortable, and so grateful to be able to watch these amazing performances from the sidelines. Attending shows put on by The Acoustics, The Heightsmen, and various other groups has been tenfold more enjoyable, still led me to find friends with similar interests, and helped me participate in activities on campus even though I wasn’t technically part of the show.

The group that I have to specifically attribute my learned outgoingness to, however, is Word of Mouth, a public speaking group. While that sounds fairly professional and boring (and disjoint from any arts topic) WoM is anything but. More than just a public speaking club, WoM builds community, confidence, and happiness in all of its members. Every week at forum I was able to practice my spoken word, telling stories that were sometimes funny, sometimes tragic, and sometimes just downright boring. Even when my speeches did flop, which was more often than I’d like to admit, the sounding board of students to which I spoke was full of positivity and only constructive criticism. My distaste for presenting myself in a public setting has waned over the course of the year as I realized that I am not judged by my audiences as fiercely as I once believed.

I’m sure this column has been frustratingly cliche—girl goes to college, changes her expectations, finds peace with herself. But since it’s the end of the year, and sentiment is high, I figure this is a better time to do it than any. So thank you for bearing with me, and thanks to BC arts for helping me find my place here—and of course to the arts section of The Heights for fostering all of my tangential rants about it. It’s been a great year for arts at BC, and a great year for me to experience it. 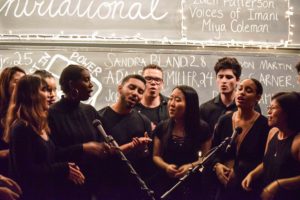 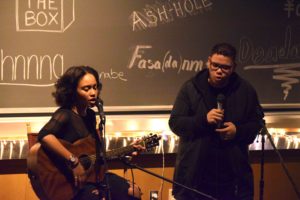 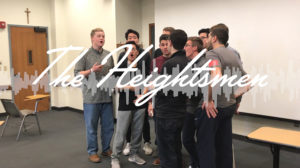