Just because it wasn’t unexpected doesn’t make it sting any less.

Boston College men’s hockey received another blow after learning that defenseman Ian McCoshen has signed an entry-level contract with the Florida Panthers, the team that drafted him with the 31st overall pick in the 2013 NHL Draft. If McCoshen breaks camp with the NHL club, he could earn $925,000 per season.

A native of Fairbault, Minn., McCoshen ends his three-year career as BC’s top blue liner with 50 points—17 goals and 33 assists—in 110 games. This season as an alternate captain, McCoshen had six goals and 15 assists, the second-most total points among BC defensemen in 2015-16. His best individual performance came against Boston University at Kelley Rink on Jan. 15—the junior had two goals and two assists to help Jerry York win his 999th game. Though he had mental lapses at times, most notably in the Hockey East semifinals against Northeastern, McCoshen was a force on the ice. His bruising mentality complemented freshman Casey Fitzgerald, and he finished with a plus/minus of +30.

McCoshen, who was slated to be the captain along with Chris Calnan in 2015-16 had he stayed, joins 2014-15 captain Mike Matheson in Florida on the defensive front. He is the sixth player to leave early this season, joining fellow defenseman Steve Santini; forwards Miles Wood, Adam Gilmour, and Alex Tuch; and goaltender Thatcher Demko—the Eagles will also lose significant senior defensive contributors in Travis Jeke and team captain Teddy Doherty. With McCoshen gone, BC has only four defensemen on the roster: Fitzgerald, Michael Kim, Scott Savage, and Josh Couturier. The program will also have to rely on at least two freshmen, as Connor Moore, Mike Campoli, Luke McInnis, and Jesper Mattila will head to Chestnut Hill in the fall. 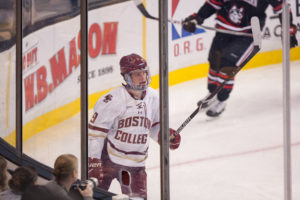