It was BC’s game from the start. The Eagles controlled the pace by outshooting Quinnipiac 12-1 in the first half alone. Defensively, the Eagles had a quiet game, since most of the match was controlled by the attack.

In the 39th minute, senior Maximilian Schulze-Geisthovel placed the final shot of the half neatly in the back of the net, assisted by senior Isaac Normesinu. The first goal of the season was also Schulze-Geisthovel’s first goal in a BC uniform—he previously played three seasons at St. Leo University, a Roman Catholic liberal arts college near Tampa, Fla..

While Schulze-Geisthovel’s goal proved to be the game-winner, sophomore Raphael Salama redirected a corner kick from junior Mohammed Moro. Salama headed the corner past Quinnipiac and into the net for his first collegiate goal.

Quinnipiac defense showed its strength in its ability to get under the Eagles’ skin Friday night. Relentless defense forced the Eagles to also lead Quinnipiac in fouls. By the end of the game, the men had managed to rack up 12 fouls and three yellow cards.

A flustered BC team allowed Quinnipiac to seemingly get into the swing of the game, and after a number of Eagle substitutions, Quinnipiac finally got a few shots off late in the second half.

But it was too late for the Bobcats. After not seeing much action in the first half, sophomore goalie Cedric Saladin managed to make all three of his saves in the final 35 minutes, keeping Quinnipiac off the board. Saladin and his team played solid defense and managed to shut out Quinnipiac’s newly fired-up offense. 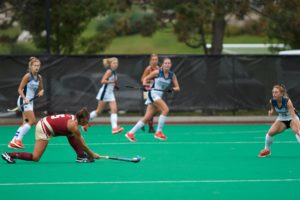