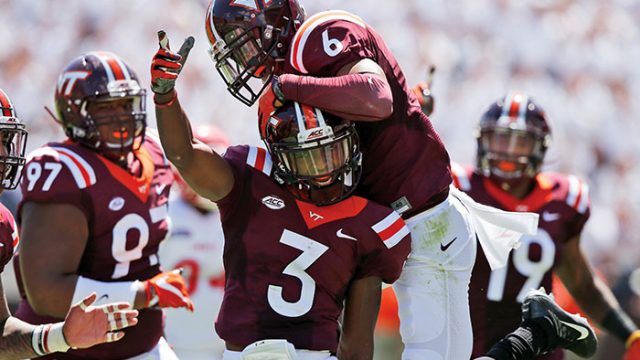 It’s never easy replacing a legend. Two games into his first campaign in charge of Virginia Tech, Justin Fuente has discovered this truth the hard way. After spending the last four seasons at Memphis, Fuente now helms a program run for the last 29 years by Frank Beamer, a coaching legend who left an impeccable track record of success in his wake. Initially, it seemed that his role would simply be to revitalize the Hokies’ program, energizing a team that had slumped to a 7-6 record in three of Beamer’s final four seasons.

After two weeks, however, Fuente has a much more fundamental problem on his hands—his players have forgotten how to secure the football, losing a staggering nine fumbles, easily the worst in the nation. Simple actions like snapping the ball or handing off have become adventurous. For a group of players schooled in Beamer’s coaching philosophy, the lack of ball security is alarming. Over the entirety of last season, the Hokies lost seven fumbles. Five of Beamer’s final 10 Tech teams lost fewer than nine fumbles.

The turnovers have negated much of the offense’s promise early in the season and have made life exceedingly difficult for the defense. Of the 58 points that Virginia Tech (1-1) has surrendered this season, 30 have come on possessions directly following Hokies’ turnovers. Now, preparing for an ACC home-opener against Boston College (1-1, 0-1 Atlantic Coast) and its ball-hawking defense, Fuente must confront his first critical moment in Blacksburg, taking control of the team and refocusing them on the fundamentals of the game. Otherwise, the post-Beamer era may be headed for a sloppy beginning.

It’s a shame that the notoriety of Virginia Tech’s fumbling problem has overshadowed an otherwise positive beginning to Fuente’s tenure. The offense shows the potential to move beyond last year’s mediocre unit. In 2015, Beamer utilized the tandem of senior Michael Brewer and junior Brenden Motley under center. The duo combined to throw for 14 interceptions, and neither completed more than 60 percent of his pass attempts. In addition, though Motley possesses decent mobility, neither posed a significant threat in the run game, nullifying the efficiency of any zone read concepts Beamer wanted to implement.

This season, Fuente has given the offense’s keys to Jerod Evans, a dual-threat, junior-college transfer from Texas. Evans won a preseason competition against Motley to secure the job. Though he has lost three fumbles already, showing some indecisiveness with option reads, Evans looks much more explosive in the run game than last year’s quarterbacks. His addition to the lineup has reinvigorated the zone read in the Hokies playbook. Evans also has thrown five touchdowns and no interceptions throughout two games, completing two-thirds of his attempts. With a strong arm and developing touch, Evans might be the answer to Tech’s quarterbacking issues.

Finding the right quarterback to helm the offense could lead to a breakthrough for the Hokies. The team returns virtually its entire bevy of running backs and receivers from 2015. Sophomore running back Travon McMillian, who last season rushed for 1,043 yards despite not being the lead back until mid-October, boasts excellent explosion. Last weekend, in Tech’s 45-24 loss to Tennessee, he ripped off an impressive 69-yard touchdown run. McMillian can also handle a heavy workload, averaging 23.5 carries a game over the final six games of 2015.

In the passing game, the Hokies feature a trio of juniors. Isaiah Ford, who racked up 1,147 receiving yards in 2015, is a true No. 1 receiver. He serves as a steady focal point for Evans, a player who is just as comfortable serving as a possession receiver as he is streaking deep down the field. Cam Phillips provides Evans with a speedy secondary option out wide. Finally, Bucky Hodges serves as the X-factor in Fuente’s offensive scheme. The 6-foot-7 hybrid receiver/tight end is comfortable lining up anywhere in the formation, even getting involved in the rushing attack during the Tennessee game. He also provides Evans with a safety blanket in the red zone.

On Saturday afternoon, look for Virginia Tech to use a lot of spread concepts against the Eagles. Georgia Tech and Massachusetts showed that BC’s defense is far too good for run schemes featuring jumbo personnel to have much success. Spreading the field and moving the Eagles’ linebackers away from the line of scrimmage might be the Hokies only chance to generate consistent rushing offense. Evans and McMillian should cobble together enough successful runs to keep drives moving, but if Tech wants to score on BC, it will likely need to be through the air. Both UMass and Georgia Tech succeeded a few times with deep passes against the Eagles’ man coverage on the outside. Ford and Phillips need to win one-on-one matchups with these defenders. Additionally, look for Evans to target Hodges down the middle of the field. Though they rush the passer and stuff the run well, BC’s linebackers sometimes struggle with pass coverage.

On defense, Fuente has been able to lean on long-time defensive coordinator Bud Foster—a Beamer holdover—to run a unit that retains most of the players from the 2015 squad. Foster generally favors man defense in the secondary, with aggressive pressure coming from all over the formation. His defenses traditionally fly to the ball, and last season was no exception. Despite only tallying 10 interceptions, Foster’s 2015 unit managed to rank among the top turnover-forcing defenses, thanks to an FBS high 15 recovered fumbles.

The Hokies have been excellent in third-down situations in recent years, allowing just 33.5 percent of attempts to be converted in 2015, 20th nationally. Impressively, the 2016 unit has lowered that mark significantly, allowing just 17.9 percent of third downs to be converted thus far in the young season. Though they tend to struggle a bit against the run, Virginia Tech’s defense succeeds by virtue of its excellent secondary, led by senior defensive back Chuck Clark, who tallied over 100 tackles in 2015. Last season, the Hokies ranked 19th in passing defense, a mark they look very capable of matching this season.

Perhaps the only defensive category that the team has struggled with recently is in the red zone. In 2015, the Hokies allowed opponents to score on 87.5 percent of their trips inside the 20-yard line, a very high mark for such a quality defense. This season, the Hokies have yet to stop either of their opponents on a red-zone drive.

Though it is an area they must work on, the responsibility for this failure rests mainly on the offense. Its incessant fumbling has wasted much of the talent present on both sides of the ball, ending offensive drives before it can become productive and forcing the defense to constantly stand in the shadow of its own goal line.

Like pulling the wrong block from a Jenga tower, the Hokies’ fumbling issue undermines the team’s success and prevents its talent from showing itself. If Fuente wants to begin his ACC career on a high note, he needs to impress the value of ball security on his men. Otherwise, the BC defense will gladly spend the afternoon knocking down everything the new coach has strived to build.