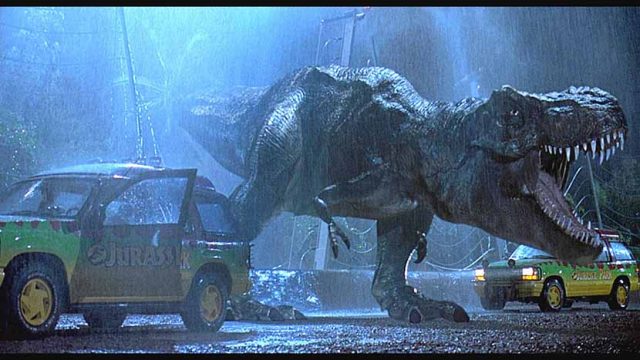 Will the New ‘Jurassic World’ Trilogy, Uh, Find a Way?

Dinosaurs and sharks have always scared the living s—t out of me. While there are more than enough non-extinct species besides these two that could mutilate me in just as terrible of ways, sharks and dinosaurs scare me more than most things on this planet. It’s no mystery for me as to why—I saw Jaws and Jurassic Park when I was but a wee little lad. Even today, despite how fake the Jaws shark looks when held up to real sharks, I still hesitate to step in the shower a day after I watch the movie because I’m so petrified at even the idea of touching water. Jurassic Park instills an even deeper fear in me of being torn apart limb from limb. Thank God dinosaurs are extinct.

While the Jaws franchise died after its fourth installment (the horrendous and irredeemable Jaws: The Revenge), Jurassic World proved that, at least at the box office, the Jurassic Park series is still very much alive. 14 years after the release of Jurassic Park III, a film that held neither box office results nor a critical reception to boast, Jurassic World hit theaters with one of the strongest opening weekends of all time and eventually went on to become the 4th highest grossing film ever. The film did not, on the other hand, receive universal praise from critics, garnering a 59 percent on Metacritic.

I, for one, really didn’t like Jurassic World. At times it was very pretty, but visuals do not an entire movie make. While Chris Pratt’s character is actually pretty fun and he acts as the voice of reason in an incredibly ridiculous setting, his co-star, Bryce Dallas Howard, and her character are almost detestable. I get it—the InGen staff’s hubris is what leads to the Jurassic World’s park’s epic demise, but there are a lot of bizarre aspects of the story that reach way beyond that point. Dallas Howard’s grabbing a T-Rex to fight off the big, new, and scary dinosaur? That guy from the army wanting to train raptors as soldiers? No—a thousand times, no. Jurassic World has some beautiful and fun moments, but the movie’s sillier moments seriously mar what should be the essence of Jurassic films—horror.

What makes Jurassic Park so good is the horrifying idea of you and a couple buddies being trapped on an island with these man-eating creatures. Sure, the folks who get left behind on the island in the first movie have a few shotguns, grenades, and a Jeff Goldblum to boot, but besides these trivial and sparse weapons, they’re entirely on their own—and that’s overwhelming for a viewer.

Jurassic World, with all of its car and motorcycle chases, dino-fights, and T-Rex/pterodactyl hybrids, feels like an over-the-top, CGI-ridden action-adventure film. It doesn’t matter how loud you make the T-Rex screech after it has killed the Indominus rex, if you have it plainly ignore the tasty humans in front of it, you have ripped away the essence of the terrifying monster that the T-Rex is. This is the problem with Jurassic World—it forgot what genre the Jurassic movies are supposed to be in. Some might say that the series is just evolving. I’d say the producers need to call the new films something else if that’s what they want to do.

Now, a trilogy of new Jurassic films, starting with Jurassic World, is in the works. Confirming the trilogy, the director of the Jurassic World sequel said in an interview with LRM, “The whole ‘Jurassic World’ is a trilogy that Colin Trevorrow has envisioned. We’re writing the second chapter, and it’s very interesting where he’s leading the story.”

No offense to Trevorrow, who will be directing Episode IX in the new Star Wars trilogy, but what more of a good story is there to be had from this series? There comes a point when a franchise needs to be dropped. I know, as I pointed out, that Jurassic World made an absurd amount of money. That, on the other hand, is no real excuse to go ahead and make another sequel. Jurassic World already took such a step away from what Jurassic Park was that I couldn’t imagine what more producers and executives are willing to do with the series.

Sadly, I think I’m alone in how I feel towards this new trilogy—Spielberg is even working as a producer on it. Hey, maybe it’s just me, but soldier raptors sound like a crazy idea.

Propaganda of the Great War Affected Life at Home and on the Fronts
McMullen Moves to Brighton, Beckons a New Beginning for the Museum