A dinosaur, an elephant, and an octopus walk into a treehouse.

Or, rather, they’re crammed into one on the weirdly wonderful album cover of MisterWives’ debut LP, Our Own House. The band’s endearing quirkiness seems to manifest itself in every conceivable way—in its odd alternative-dance sound, within the unconventional plots of its music videos, and especially in the individual members’ personal wardrobe choices. Everything the band plays is infectiously dance-inducing, the atmosphere it creates simultaneously carefree and passionate. The band makes emotion-soaked songs. Its lyrics are colorful. Its message is fun.

Coordinated by BC’s Campus Activities Board (CAB), this year’s StokesSet marks the first major fall concert of its kind. Located on Stokes Lawn, the event was yet another opportunity for BC’s music lovers to see some big-name bands right from the comfort of their own campus. Much like Plexapalooza in the winter and the annual Modstock event in mid-April, this CAB-sponsored concert brings both up-and-coming and well-known acts to the Heights.

For an end-of-summer concert, the chosen venue could not have been planned any better. Aglow with lights and alive with pulsing background beats, the entire space surrounding Stokes Lawn was transformed—if only for just one night. Fulton’s exterior boasted beams of colorful lights while Stokes bathed in rainbow hues, offering concertgoers an ideal backdrop for photos while mimicking the vibrant and electric mood of a summer music festival. Both the BC and CAB logos were projected directly behind the stage and onto Carney. The expansive Stokes Lawn easily accommodated an entire stage as well as the horde of students in attendance, with a lot of extra room to spare. When both acts assembled onstage and began to play, music lovers milling freely around the space or lounging on the grass gathered immediately to form a large mass of bobbing heads and voices singing in unison.

As has become customary for many of the University’s music-related events, BC-born Juice opened the show with a set of original tracks straight off of its self-titled debut album. Now familiar with much of the band’s original material and favorite covers, the audience sang along to hits “Gold,” “BCY,” and “Pineapple Groove,” among a handful of others. The funk-pop blend blasting through the speakers thanks to the opening band was a perfect prelude for the indie-pop hits MisterWives would bring to the stage next.

After Juice thanked its cheering audience, the stage crew worked quickly to prepare for the arrival of MisterWives. In the interim, students played rounds of cornhole and other seasonal games provided by CAB. Most others waited impatiently for the headlining group to finally step onstage.

“Oh my goodness gracious, Boston College,” Lee shouted at the start of the set. Proceeding to praise the crowd for its tremendous support and impressive turnout, the singer rewarded her fans with a performance of “Drummer Boy,” a new song off of MisterWives’ highly anticipated sophomore album. Having spent the past year writing new music instead of touring, the band treated its BC fans to a snippet of its upcoming indie-pop LP. As expected, the crowd erupted in applause when the band played two of its most popular chart-toppers, “Reflections” and “Our Own House.”

Undoubtedly, the standout element of the night was Lee’s impressive performance. Her tireless efforts to get the crowd dancing and singing along were made successful thanks to her unmistakeable charisma. Boasting boundless energy and an impressive set of pipes, her scream-singing and raspy sound made for an endearing performance when coupled with the singer’s eccentric dance-skipping across the stage. A testament to her raw talent and the band’s desire to keep its music untainted by overproduced vocals, Lee wowed with a powerful voice that was just as dynamic and stirring as it is on the recorded album.

In a word, StokesSet was fun—MisterWives made it that way. For an incredibly successful band-on-the-rise, it seems as though the members don’t take themselves too seriously. The fun they have onstage is intoxicating and infectious. Even their music videos are fun. And weird. But this is why they’re so likeable. Unlike most music moguls of today, nothing of theirs is in any way glitzy or overproduced. In the videos, MisterWives’ quality lyrics and perfectly produced music are paired with decidedly silly premises—’80s themed dance-offs and water gun fights being just two.

“The show was pretty incredible,” he said. “Stokes lawn was a great choice of venue, and MisterWives knocked it out of the park. We had lots of fun on stage, and it was an honor to get a chance to play with those guys.”
As Modstock’s end-of-summer sibling, the new fall concert event is sure to thrive if acts as entertaining as MisterWives continue to take over Middle Campus. 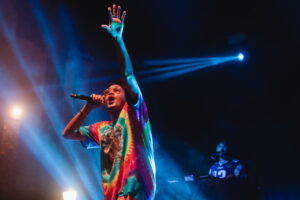