Home » Wagner Game Provides Opportunity for BC to Return to Basics 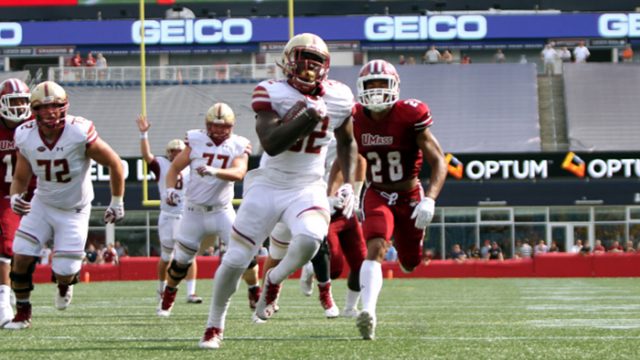 Wagner Game Provides Opportunity for BC to Return to Basics

Last Saturday was one for the record books for Boston College football—records, however, that are best left unbroken. On their way to a 49-0 loss, the Eagles (1-2, 0-2 Atlantic Coast) and punter Mike Knoll set a team record for the most punts in a game with 13. It’s their largest margin of defeat since an Oct. 7, 1950, 54-0 loss to Ole Miss. In the loss, Virginia Tech (2-1, 1-0) quickly grabbed the momentum and never let go in a complete and utter domination. The Hokies outgained BC, 476 to 124, stalling the Eagles’ already-struggling offense by forcing three-and-out after three-and-out. Not exactly a game BC fans, or players, will remember with fondness.

The sting of the shutout should be somewhat relieved, however, by the home opener this Saturday against Wagner (2-0). On paper, Wagner looks to be a formidable opponent. The Seahawks come into Alumni Stadium on Saturday on a two-game winning streak. In that time, they have beaten their opponents by an average of 30 points, while gaining an average of 7.2 offensive yards per play.

This all sounds impressive, that is, without context.

Look at the schedule, and you’ll realize that those stunning defeats by Wagner came against Concordia (2-1, 1-0 Mid-States Football), a Division II team, and St. Anselm (0-3, 0-2 Northeast-10), a Division II team currently exploring the possibility of becoming a Division III team. With all of this laid out, it becomes clear that Wagner—an FCS team—should be a nearly automatic win for BC nestled between more evenly matched, must-win games. This idea is further cemented by BC’s recent experience with other FCS schools. Last season, BC trounced Howard 76-0 in a game where the Eagles’ defense allowed just 11 yards and two first downs.

While it would be hard to imagine a beating that bad for Wagner, it should still be a resounding win by the Eagles, who will have the opportunity to go deeper in their roster than previously possible this season. That’s assuming the Eagles take advantage of the mismatch and go up early. It is important for the Eagles to not overlook this game despite the opponent and, instead, take this game as a time to improve and work out issues already experienced in the young season.

After practice on Tuesday, BC quarterback Patrick Towles repeatedly said that the offense was just “worried about us,” rather than dwelling on the loss or looking past their upcoming opponents. This is the exact attitude that BC’s offense needs to carry into the game against Wagner. Saturday is a testing ground for the upcoming must-win games against Syracuse (1-2, 0-1 Atlantic Coast) and NC State (2-1). As such, Towles must have a continued focus on getting the ball out quickly. Against Wagner, the offensive line should hold up, but against more daunting opponents—especially on left side—it’s been prone to quickly collapsing. Towles needs to get in-game experience with keeping up a slightly faster tempo and getting the ball down the field quickly so that the BC offense doesn’t get stalled like it did against Virginia Tech.

Look for Towles to practice throwing more downfield targets against a weaker Wagner secondary. Wide receivers Jeff Smith and Charlie Callinan, who have already shined this season, should continue to do so on Saturday, while Michael Walker and tight end Tommy Sweeney should use the advantage of more playing time to have a bigger impact.

The run game needs to similarly rebound from a rough Tech game in which BC rushed for only 44 yards, 17 of which came via Towles. The run game has been hampered by weak O-line play on the left side, which leads to a predictable run pattern that can be easily stopped by stacking the box on the stronger right side. As such, the running back corps led by Jonathan Hilliman has had trouble breaking through the holes. In theory, these issues should be less pronounced, due to Wagner’s weaker defensive line play, compared to earlier opponents.

The other side of the ball must similarly view Saturday’s game as an important practice opportunity coming off of the beating it took last week. Virginia Tech, in many ways, provided a blueprint for how to best the BC defense: go up-tempo and straight for the secondary. Wagner does not have the firepower to replicate this approach, but expect them to still go after the secondary. BC’s defense is not as bad as a 49-0 loss would suggest, as poor offensive play left them in bad field position and on the field for 35 minutes of the game. That being said, the defense needs to reassert itself to show the world—and itself—that it’s top-tier and should be feared, not to mention that it shouldn’t miss former defensive coordinator Don Brown.

BC should win this game, but it doesn’t just need to win this game, it must win big. This week is a bounce-back week and can provide a chance for BC to hit restart on this early season, but only if it approaches the game fully focused on improving its skills and techniques during a live-game situation. This game is not about Wagner. Despite what the scoreboard will say this weekend, it’s about the games that come after—that ones that will define the 2016 BC football season.