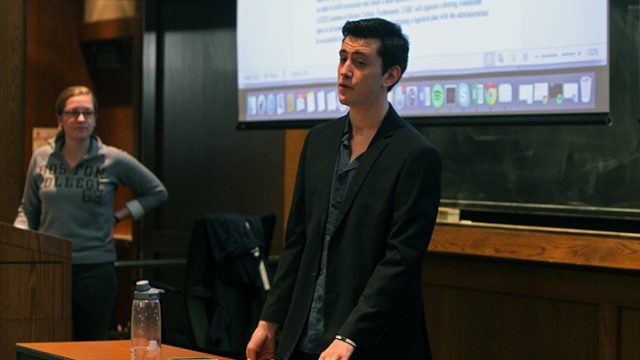 In the spring of 2015, a petition was created and signed by students and alumni who pledged to withhold donations to the University until a designated resource center was established for LGBTQ students. Then, The Heights published an editorial supporting the creation of this center, citing the need for a secure location and dedicated full-time director to support LGBTQ students. In the time since then, there has been little public progress toward the creation of this center. The homophobic slur written on a parking sign last week has sparked the debate again and has demonstrated the need for action from students, as there has been zero administrative response beyond a letter to the editor from Dean of Students Thomas Mogan.

Sunday, the Undergraduate Government of Boston College Student Assembly passed a resolution calling for this LGBTQ student resource center by a vote of 15-2. The resolution creates a steering committee that is meant to work with the administration to draft plans for the resource center, which would bring together various LGBTQ resources on campus, such as the GLTBQ Leadership Council. The center would be logistically similar to the Women’s Center and the Thea Bowman AHANA and Intercultural Center that BC currently has. BC would not be the first Catholic, or even the first Jesuit, school to establish such a center. As was pointed out at the SA meeting, Georgetown established an LGBTQ resource center in 2008.

While this resolution is not likely to bring about an immediate response from the administration, it is a good step by the SA. As Connor Kratz, co-sponsor of the resolution and MCAS ’18, said, “I understand that the University is unlikely to establish this center immediately if we were to pass this resolution, however, I don’t think this is any reason to not take an affirmative stance on the issue as a student government.” The SA, as elected representatives, speaks on behalf of the entire student body, and by putting its support behind the center, it gives it a new voice beyond the alumni who signed this petition in 2015. Yet, Kratz has acknowledged that the efforts of UGBC are largely futile here. If the administration fails to respond, it shows a lack of engagement with the student body that can be pointed to in future debates. Administrative silence encourages a disconnect between the student body and those who make the policies that govern it. At a point where the student government feels powerless, the onus is upon the administration to encourage a more open dialogue on this important issue.

Beyond passing this resolution, UGBC does not have the resources to actually create a center. For that, it must work with administration. Though the administration as a whole has generally been unwilling to work with LGBTQ advocates to build a resource center, there are sympathetic members of the faculty and administration. These people should speak out about the issue and play a larger role. Professional voices supporting the SA’s actions and the creation of an LGBTQ resource center would lend the resolution a great deal of credibility. Much of the discourse within the administration about LGBTQ issues and possible future plans is not publicly known. UGBC’s passage of the resolution is a symbolic victory. It acknowledges that an LGBTQ resource center is something the student body wants. Now, the administration must acknowledge that what students and alumni call for ought to be considered.