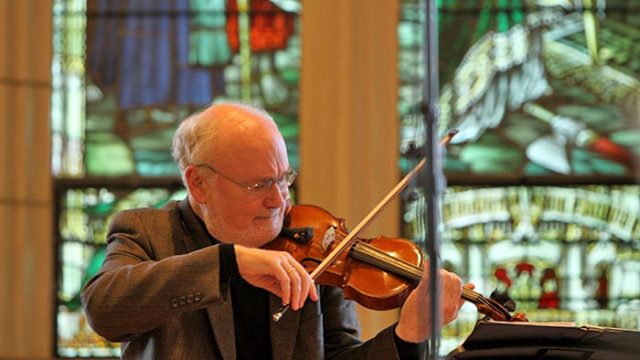 When one pictures a gorgeous, perfect Sunday afternoon at Boston College, what comes to mind? Probably a clear, blue sky, a steady warm breeze, and, of course, a good classical violinist set in Gasson 100. Okay, to be fair, hearing classical music in Gasson might not be at the top of everyone’s list of what makes up a perfect day. If, however, you happened to be in Gasson 100 Sunday afternoon listening to professional violinist Daniel Stepner’s set, including pieces from Johann Bach, Paul Hindemith, and Bela Bartok, you would have to admit that the arrangement acted as the icing on the cake on what was a beautiful Sunday at BC.

Stepner is the artistic director of the Aston Magna Festival and Foundation. He was also the first violinist for the Lydian String Quartet for 29 years, as well as the concertmaster of the Handel and Haydn Society Orchestra for 24 years. Besides his performance Sunday afternoon, Stepner will return to Gasson 100 with pianist Donald Berman Sunday, Oct. 23.

Gasson 100, in and of itself, is probably the best place on campus to take in a selection of classical compositions. The hardwood floor, multitude of formal portraits, and the natural light flowing in from the windows facing Linden Lane all coalesce to set the perfect ambiance for a classical music performance. Throughout the performance, it seemed as though the wind would pick up and drop off in synchronization with Stepner’s music, swaying the tree branches with an unnatural rhythm. Alumni and students alike gathered in the decadent hall to hear Stepner’s renditions of Hindemith’s “Sonata, Op. 31, No.2,” Bartok’s “Sonata for Solo Violin,” and a few other, smaller pieces.

The Hindemith and Bartok numbers were the central pieces of the performance, making up the first act before the intermission. Stepner worked his way through the several different stages of both pieces, separating them with a brief pause. The segments inside of each piece were tonally different and sounded thematically different. The first stage of Hindemith’s piece, for instance, sounded extremely harmonious and comforting, mimicking a serene walk through a well-lit forest. The number’s last stage, on the other hand, at times sounded very discordant, with sharp changes in the pitch of violin from note to note. The several stages of each of the artists’ pieces suggest that each piece holds a stunning tonal and emotional range, but the broken-up nature of each of the sonatas makes these shifts in tone sound like a different song, not a developed stage of a cohesive piece.

Between each of the pieces he performed, Stepner would provide a bit of historical background on the upcoming number and its artist. These little anecdotes were delivered passionately by Stepner and were helpful in building a context for the themes and sounds of each piece. The morose tone of most of Bartok’s “Sonata for Solo Violin” is more easily appreciated when one knows that Bartok composed the piece while in exile. Stepner’s stories gave attendees a taste of his enthusiasm for the history behind the music he performs.

The second act of Stepner’s performance consisted of comparatively smaller sets from Bach, Thomas Oboe Lee, Albert Spalding, Nicolai Rimsky-Korsakov, and from Stepner himself. Of these sets, Bach’s “Three Dances” and Oboe Lee’s “Choros, Op. 63” were the most intriguing. And Stepner’s own composition, compared to the critically praised pieces he performed, held its own emotional weight.

It’s not very often that one finds the spectrum of people of different ages at a BC arts performance. This collection of diverse people, however, demonstrates the pervasiveness of classical music’s influence over generations. Stepner’s renditions of these classical pieces were impressive, making it difficult for those in attendance to say that they weren’t touched by what they heard in Gasson Sunday afternoon. While not all in attendance looked captivated by the performance, there were more than enough students and attendees swaying their hands and heads to the music.

daniel stepner
Admin Should Respond to SA Resource Center Resolution
Why Wait? BC Should Retire Alex Carpenter’s No. 5 Right Now