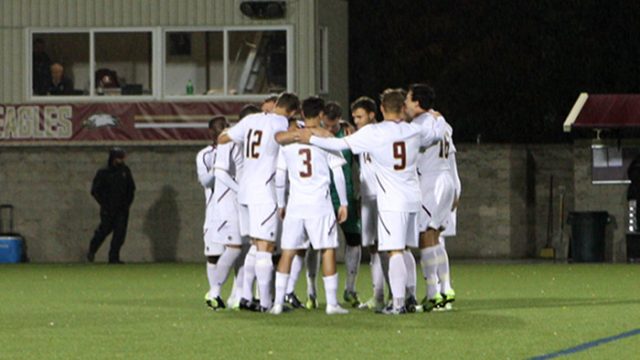 The differences between Boston College and Louisville men’s soccer are as clear on paper as they were on the field. The Eagles thrive with a fast-paced style, centered around the speedy play of wingers and towering presence of Maximillian Schulze-Geisthovel and Simon Enstrom up top. Ten of BC’s 11 starters are from outside of the United States, adding a creative, international feel to the up-tempo attack.

In comparison, Louisville plays a more technical game, but also has explosive forwards who have caused nightmares for opposing defenses all season. But there isn’t quite the same flair in the Cardinals lineup, which has just one foreign starter.

On Friday night, however, all game plans went out the window when rain started to pour two hours prior to to the match. The wet conditions meant both teams were thrown out of their comfort zones and had to adapt to a new, slippery environment. When that happens, the outcome is often decided by a simple question: Who is the best player on the pitch?

Under the lights at Newton Campus Field, the Eagles and No. 9 Louisville tried for 110 minutes to answer that question, but to no avail. Cardinal midfielder Daniel Johnson and BC’s Zeiko Lewis made strong cases, each adding a goal in the second half. Yet shutdown defensive performances by both squads in the first half and overtime kept the scoring at that, resulting in a 1-1 tie against the Eagles’ third Top-10 opponent in four games.

Johnson and Lewis traded punches all night. The Louisville (7-1-2, 3-0-1 Atlantic Coast) senior first threatened BC (5-3-1, 1-2-1) in the seventh minute, when he combined for a give-and-go in the attacking third and ripped a shot toward the upper left corner of the net. Goalkeeper Cedric Saladin leaped into a full-extension dive and batted the ball away with two hands to keep the game scoreless.

Minutes later, Lewis responded by winning the header in the midfield, beating his man, and taking the ball down the left sideline with daylight ahead of him. Right before he reached the 18-yard box, though, a Cardinal defender made a superb tackle to stop the attack.

In the 17th minute, Lewis once again won the ball on the left side, this time nutmegging his defender before streaking down the field and earning a corner on an attempted cross. For the rest of the first half, the back-and-forth continued, but both back lines made tackles when they needed to. In particular, Tomas Gudmundsson, the 6-foot-5 replacement for the injured Len Zeugner, and Raphael Salama stood out for BC on the defensive end.

Twenty minutes into the second half, Johnson finally broke the stalemate with a little help from the unfriendly weather conditions. A Louisville corner kick caromed off of Geoffrey Dee and Johnson controlled the cross at the edge of the box. The Maryland transfer took two touches to his right and fired a one-hopper that skipped off of the wet turf and through the legs of Saladin.

With four minutes remaining, late-game substitute Trevor Davock created an opportunity for the Eagles to equalize. The sophomore striker broke off a run down the right side and lined a shot that deflected off of the Cardinal keeper and landed at the feet of Enstrom. Holding away defenders with his signature box-out move, the Swede tapped the ball back to Lewis at the six-yard box and he finished from close range to tie the game. It was BC’s first ACC goal in nearly three weeks.

“I saw Simon back to the goal, I told him ‘Drop it,’ and I was just praying I didn’t miss,” Lewis said. “Scoring and drawing to them and not losing to them this time was a big step in the right direction for us. And I enjoyed every second of it.”

In overtime, the Eagle defense fended off one last series of attacks to maintain the 1-1 score. Louisville outshot BC 4-1 in the two 10-minute overtime periods, including forcing Saladin to make a game-saving block with 36 seconds left.

After the game, head coach Ed Kelly was proud of his team—and rightfully so. The Eagles concluded a brutal stretch of games with one of their best defensive showings of the season, and made one of the nation’s best teams fight to earn a draw. BC deserves a breather, and the team will finally get one with seven days off before matchups against Pittsburgh and Harvard.