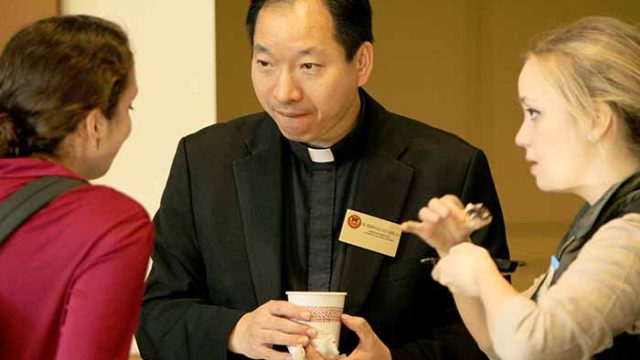 The first “Professors, Professions, & Pastries” in a series of such events set to run throughout October was held Wednesday afternoon in Stokes Hall South.

This week’s event continued a 10-year tradition that Rory Browne, director of the Academic Advising Center, started when he came to Boston College from Harvard University, where he was associate dean for freshmen.

“[At Harvard] one of the things I realized is that we needed to create more events where students and professors could get together informally, outside of the classroom,” Browne said.

While working at Harvard, Browne arranged a series of informal meetings in the freshman dorms, called Professors and Pastries.

His hopes for the pastry series, both at Harvard and BC, were to have a free event for students to come to at their own leisure. The event also allows students to mingle with faculty and fellow students alike.

Various career paths and academic fields will be featured throughout the month. The first week focused on life science majors and health professions. Other themes include “How to Succeed in Business with a Liberal Arts Degree,” “Studying, Working, and Living Abroad,” and “The Fine and Performing Arts.”

These events allow students to express and explore their interests. This year, Browne partnered with the Career Center for students to get information on possible future career paths for majors they are either interested in or currently pursuing. This is what led to the series’ name changing to Professors, Professions, & Pastries. In this way, Browne said the series plays into the Jesuit ideals BC was founded upon.

“I think it’s so great to see students, faculty, and administrators all in the same room. From what I’ve seen, students are getting a lot of valuable information, and I think you can’t go wrong when there’s food there, too.”

“The Ignatian way is to aid the full development of the student and to help students to find their path,” he said.

Since relocating to Stokes Hall South, the event has been held in the lounge area outside of the Academic Advising Center.

On Wednesday, the space offered a table of food and beverages. Faculty members such as Kenna Sullivan and Joe McLaughlin from the School of Social Work, and William Petri, associate dean of the Morrissey College of Arts and Sciences, were in attendance.

Undergraduate advisement fellows were also present to aid students and faculty members in meeting each other and getting comfortable with mingling. One of these was Risa Kuroda, a peer adviser and MCAS ’17. Kuroda was present at last year’s Professors, Professions, & Pastries event.

Kuroda and other advisement fellows were involved in social media outreach for the event, such as Facebook posts, email distribution, and putting up fliers. The fliers were redesigned this year with bright colors to make them more attractive to students.

The advisement fellows are planning a survey to see how well students were drawn this year, particularly due to the expense of catering and the time it takes to arrange the event.

Kuroda noted that she thought turnout was better than last year. Students came to enjoy the pastries and to meet with and learn from professors.

“I wanted to see if there were any suggestions or advice in how to have hobbies but still be pre-med,” said Sophia Servin, MCAS ’20.

“I think it’s good for freshmen,” Davis said. “Having a one-on-one [with a professor or adviser] instead of just like in a lecture or during office hours or something is more personal. I like it.”

While most were happy with the event, some did think more could have been done. Nicole Diaz, MCAS ’19, stressed the need for a larger social media presence for events such as Professors and Pastries, as well as more exposure on outlets like the BC website.

“I don’t feel like everyone is taking full advantage of [the event],” Diaz said. “There are certain opportunities that I feel people don’t know about, or they just don’t know when it’s happening.”

The event brought students and faculty together, which Lisa White, assistant director of employee engagement at the Career Center, said was a positive outcome of the event.

“I think it’s so great to see students, faculty, and administrators all in the same room,” White said. “From what I’ve seen, students are getting a lot of valuable information, and I think you can’t go wrong when there’s food there, too.”