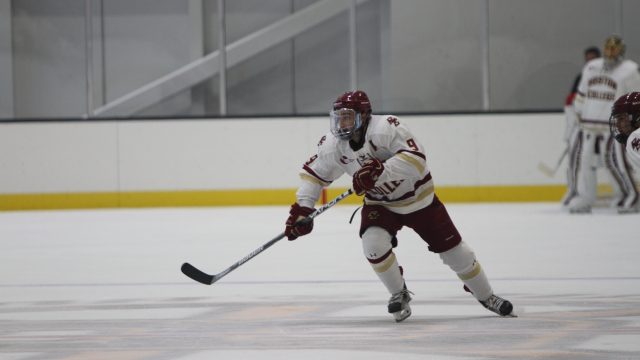 Men’s Hockey Defeats No. 3 Denver, But Falls to Air Force in IceBreaker Tournament

Hockey season is back, and after a thrilling 2015-16 season that saw Boston College men’s hockey lose to Quinnipiac in the Frozen Four, the Eagles have returned to the ice with their retooled roster. BC lost several key members of last year’s squad to the NHL, with seven underclassmen making the jump, including Mike Richter Award-winning goaltender Thatcher Demko. The Eagles look to their returning veterans and influx of fresh young talent to continue their dynastic success under head coach Jerry York. BC opened the season No. 5 in the USCHO Preseason Poll as they made their way into Denver, Colo. to kick off the year in the IceBreaker Tournament. The tournament represented a microcosm of a typical hockey season, during which anyone can win at any time.

On Saturday night, the Eagles had an unexpected top five matchup in a consolation game against No. 3 Denver, who was upset by Ohio State on Friday night. Essentially a home game for Denver, BC had its work cut out against the team that fell to North Dakota in the national semifinal last season. Yet after getting upset by unranked Air Force 1-0 the night before, the Eagles added a thrilling victory to their docket early in the season with a 3-1 win over the Pioneers.

The Eagles struck first in the middle of the first period on an even-strength rebound goal by Austin Cangelosi, who accounted for the Eagles’ only goal in Friday’s upset to Air Force, giving BC a 1-0 lead. After heading into the first intermission, Denver capitalized on one of its many power-play opportunities. Dylan Gambrell connected with Will Butcher, who snapped it by freshman goaltender Joe Woll at the top of the zone right before the Eagles’ penalty kill could collapse on him, tying the game at one.

Despite the scoreboard, the Pioneers outplayed the Eagles throughout the contest. While BC continued to miss opportunities by going 0-for-6 on the power play, Denver maintained puck control for most of the game. The Pios had a majority of the scoring chances, outshooting the Eagles 41 to 22, including 23-5 in the third period. Even without Demko, it was the outstanding goaltending of Woll that kept the Eagles in the game, making one save after another to shut down the Pioneers.

“I thought at our back-to-back game, [Woll] was certainly a catalyst for us,” York told USCHO.com after the game. “He made some terrific saves. He moves so easily and has a great feel for the game. You can talk about gloves and angles, but he just has a sense of where the puck is moving to. In that respect, he’s a very smart goaltender.”

The Eagles reclaimed the lead late in the second period on a set play that resulted in a goal by David Cotton—the first of his career. Cangelosi added an empty-net goal to seal the victory.

In the first round of the tournament, BC faced off against an unranked Air Force team. Little did the Eagles know what was coming that night, as the Falcons upset No. 5 BC, 2-1.

Air Force came out of the gate hot in the first period. The Falcons had plenty of opportunities to claim an early lead, but they failed to capitalize on two breakaways when they shot wide on both. The Eagles neutralized the Falcons for the rest of the period and escaped with a scoreless game after the first. After dodging these early chances for Air Force, the Eagles took advantage of an Air Force mistake in the middle of the second, as Cangelosi drew a hooking call in the crease, leading to a penalty shot. Cangelosi converted on the penalty for his first goal of the year, giving the Eagles a 1-0 lead in the middle of the second.

Air Force’s misfortunes continued late in the second period. The Falcons went on the power play for the final five minutes of the period as they drew a major penalty. Like the breakaways in the first period, however, Air Force was shut out on the man advantage as the Eagles killed the extended power play to carry a 1-0 lead, and the momentum, into the third period.

“I thought we were playing very well,” York told USCHO.com about his team’s play through two periods. “We capitalized on on the penalty shot, and then we had to kill the five-minute major, and I thought we did an excellent job there.”

The Eagles’ momentum vanished in the third period as Air Force scored twice to take the lead. On the first goal, the Falcons took advantage of a two-on-one situation, which ended in Matt Serratore snapping high past Woll, tying the game 1-1. Not too long after, towards the middle of the third, Air Force was back on the power play, this time on a 5-on-3. On the ensuing faceoff draw, the Falcons took the lead on a one-timer by Ben Kucera past the outstretched glove on Woll, putting the Falcons up for good as they held on for the 2-1 upset victory.