Home » What to Change About BC Dining 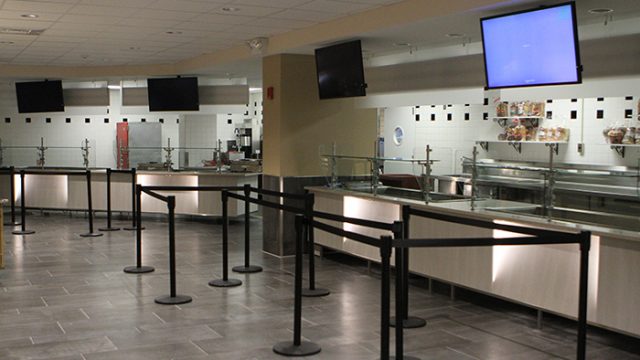 What to Change About BC Dining

Is it possible to justify theft? I think so. As I stood in the grill line at Lower, I ran through my usual routine: I ordered three pieces of grilled chicken with Cajun spice, collected them in a to-go container, and then carefully placed heaping spoonfuls of brown rice over one of the pieces of chicken to hide it from the cashier. I have obfuscated my purchase of hundreds of pieces of chicken from Lower at this point, and I don’t regret it for a second.

I feel justified in doing so because of the prices of all of the dining options on campus. A grilled chicken “meal” at Mac or Lower, which includes one 4-oz. piece of chicken and two sides (rice, potatoes, or vegetables), is valued at $10 (from $8 last year). With these high prices, the declining balance system only hurts students. Virtually every other school in the United States has a buffet dining system based on “swipes,” where a student pays for a certain number of entrance charges that grant him or her access to an unlimited amount of food after paying a base price. On USA Today’s list of “36 of the Best College Dining Halls in North America,” not one school participated in a declining balance system. Students are usually granted a maximum number of swipes per day, with rough correspondence to meal times of breakfast, lunch, and dinner. Not only does Boston College’s system empty students’ pockets quickly with high-cost meals, it also causes build-up in the food reception areas and long lines at the cash registers because everyone needs to pay for their individual orders. This would be eliminated if a buffet-style dining system was implemented.

Another issue with the current system is a lack of consistency at the cash registers. The pricing of food can vary considerably on different occasions. For three pieces of chicken, the cashiers have charged me for three separate meals, other times for one meal and two extra pieces, and sometimes for two meals and one extra piece. I have ordered a triple cheeseburger and two pieces of chicken with rice, a meal that has ranged anywhere from $17 to $35. This and several other stories speak to the unfortunate reality that BC Dining lacks a consistent charging system  for the food that it serves, which can lead to further overpricing.

The topic of long lines makes for a good transition to Eagle’s Nest. My friends and I eat at Eagle’s daily, despite the extended wait to get a sandwich. Over the summer, this area underwent a renovation that was supposed to streamline the ordering process. The result has done little to lower wait times for the majority of students. The most popular sandwich lines have been relocated to the center area, which is problematic because it interferes with the cash registers that are also in the center but near the entrance. As a result, the middle area is extremely congested. The center area was restructured to allow for the addition of a new option, the “Harmony Bowl.”

This is problematic for two reasons. First, from my observation it’s clear that very few people purchase this dish at all. More importantly, it moves staff away from higher-traffic areas. This would not be an issue if the center lines weren’t so long and inefficient. During peak traffic times after classes, students can stand in line for 25 minutes or even longer to get a sandwich (this is not a made-up statistic, I calculated it over a period of two weeks). This long wait time could easily be remedied. It seems that the two most popular sandwiches at Eagle’s are the Tuscan Chicken and the Spicy Steak (though BC should gather statistical data to confirm this, or to determine instead what the most popular sandwiches are). For this reason, BC Dining must allocate time and resources to pre-making these popular sandwiches to be more readily available for the vast majority of students who will order them. Staff should make the less popular sandwiches from scratch as they are ordered. This will undoubtedly cut down wait times.

Ultimately, it is very fitting that nearly 2,000 plates have been stolen by the student body from Lower. Earlier this year, to-go containers were moved from the serving areas and placed at the registers. Students do not want to fumble around with food at the area where they pay, holding up the line further, and therefore are less inclined to use them. There is a very easy solution to this problem: simply put to-go containers back in their appropriate spots. Until then, the student body will continue stealing from Lower. Perhaps that will spur some critical thought in BC Dining’s decision-making process.

Gaga Gives a “Million Reasons,” John Legends Demands “Love Me Now,” and More In Singles This Week
The Problem of Shaming