Home » A Night of Irish Poetry, Song, and Dance from Len Graham and Brian Ó hAirt 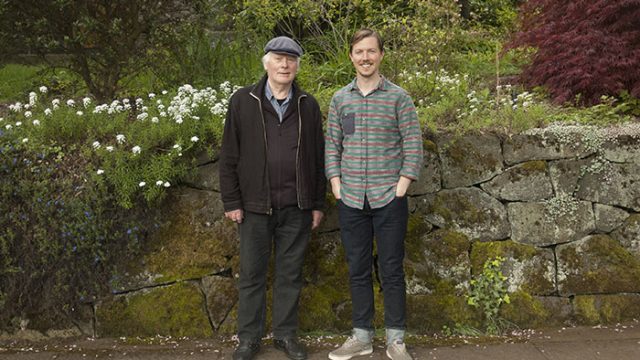 A Night of Irish Poetry, Song, and Dance from Len Graham and Brian Ó hAirt

During their performance in the Theology and Ministry Library, Len Graham and Brian Ó hAirt transported the audience to a different time and era with their natural, acoustic sound and melding of Irish poetry, song, and dance. Beginning the night by bringing the audience closer to the stage for a “campfire feel,” the duo set the scene for a performance focused on the art of music-making and storytelling.

Both Graham and Ó hAirt are excellent, multi-talented musicians and artists. Effortlessly weaving their own personal stories into their performances throughout the night, the audience understood and appreciated the men behind the music. While Graham is from Ireland, Ó hAirt was actually born and raised in Chicago. Drawn to Irish culture from a very young age, Ó hAirt came to know the language as well as the dance, music, and literature. Although the musician wasn’t born in Ireland, he learned from the best.

Graham and Ó hAirt showcased their talents in different ways. In addition to his wonderful singing voice, Graham was a wonderful orator. On two occasions, the vocalist broke out into the verses by  William Butler Yeats from memory. Delivering the poetry with fervor and poignancy, Graham left everyone still, waiting for the next word he would utter. Verse after verse, each word seemed to mean more than the previous one. After he would finish each poem, he would explain the historical significance of each of them with careful attention to detail.

Graham had a strong understanding of the historical importance of everything in the set. His gift for storytelling was remarkable. He listed dates and names as though the noteworthy historical events had happened to him personally. There was notably a certain personal element to it all that made his accounts especially interesting to listen to.

The pair had abilities outside the realm of singing and oration. In the middle of a verse, Ó hAirt stood up and began to dance in an Irish style right in time with the music. Following an older and more traditional version of Irish dancing, he surprised and delighted the audience. He paid careful attention to not cover the sound of Graham’s singing and to stay perfectly in step with the tune at hand while stomping his black dress shoes. Adding flair with some difficult turns and steps, Ó hAirt had the audience members on their toes, as well, while they watched Ó hAirt with delight.

Perhaps the most moving moment for some in the audience was when Ó hAirt began to sing in Gaelic. Some of the crowd could be seen mouthing along the words as he sang in the charming language. Prefacing each piece in Gaelic with a short translation, he would highlight important parts of the piece so the non-Gaelic speakers in the room could still understand the importance behind the words. This seemed to be the part of the show when Ó hAirt connected the most to an older generation in the room. He is a vessel for a part of the Irish culture that is vital to Irish history and really explored it well with the audience.

Ó hAirt and Graham had a clever duet arranged at the end of their set. Graham’s mother-in-law and her family had been tasked with retrieving verses from different towns in Ireland when she was a child, so they could have the full version of songs. Graham’s daughter had taken the lyrics and translated them into English so more people could understand the verse that was sung. The pair sang the ballad in English followed by Irish, allowing the audience to have a more comprehensive experience with the selection.

In addition to the singing and dancing, the men also played instruments. Graham was brilliant on the spoons, and Ó hAirt was wonderful on the tin whistle. The two appeared to have a lot of fun onstage playing fast-paced reels with their instruments, and this feeling quickly moved into the audience.

The cozy atmosphere of the event was fostered throughout the night and allowed for a personable experience between the performers and the audience. Some of the audience knew the choruses of a few of the songs and sang along with the performers. One audience member even sang out praises in Gaelic after the duo had concluded a piece.

As the night came to a close, everyone was reluctant for the pair to go. As one of their concluding songs, the vocalists performed a familiar tune and the room began to sing along during the chorus, “Happy are we all together / Happy are we one and all / May we lead a life of leisure / May we rise and never fall.”

Featured Image By Lewis Center for the Arts