Home » BC Ekes Out Overtime Win Thanks to Own Goal 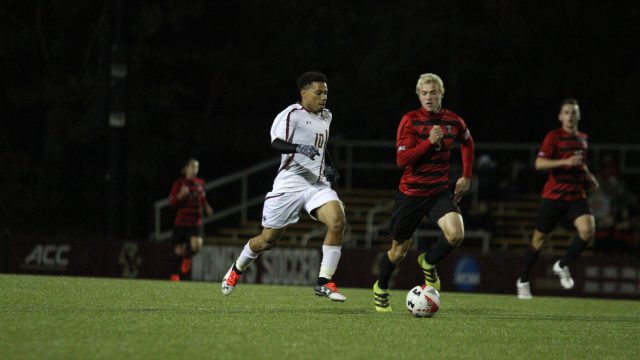 BC Ekes Out Overtime Win Thanks to Own Goal

The Eagles got the hell out of dodge.

Boston College men’s soccer defeated North Carolina State in a 5-4 overtime thriller to end the regular season. But the postgame feeling was one of immense relief rather than celebration.

Five minutes into overtime, BC sent a harmless long ball over the top. Wolfpack defender Jake Dykes went to head the ball back to his goalie but completely whiffed. Turned around and facing pressure, Dykes looked to pass the ball back to his goalie Alex McCauley on the ground, but McCauley had already come out and wasn’t expecting the back pass. As the ball rolled past McCauley and dribbled across the goal-line, many BC players just fell to the ground in disbelief like a tennis star after a grueling 5-set championship victory.

All BC could do was get out of there quickly without questioning what had really just unfolded, while perhaps thanking a higher power.

“Someone is looking after me, that’s all I can tell you,” head coach Ed Kelly said. There weren’t many other words to accurately describe the game, one can only look at the series of events to understand how erratic the game was.

The game started off with a bang when Trevor Davock scored his first goal of the year in the third minute. After chasing down a deflected through ball from Zeiko Lewis, Davock took on a defender into the right side of the box. Beating him to his outside, Davock calmly slotted  past the keeper into the far corner with a low, hard shot.

The bizarre nature of the game first showed itself in NC State’s equalizer. In the 12th minute, a high boot and dangerous play call in the box from BC led to an indirect free-kick from 15 yards out. BC goalie Cedric Saladin lined up in from the wall, in an attempt to run out and save the shot from close range when the first player touched it. But forward Julius Duchscherer powered it through everyone for the goal.

The action continued in the 23rd minute when Davock scored his second after a scramble in the box, just beating out the keeper with an outstretched foot to tap it into the net.

Four minutes later, Callum Johnson shocked every on-looker with a blast from 25 yards out that went off of the post and in. The helpless goalie, frozen in place, was an accurate depiction of how this game would end.

Like on Tuesday against UMass Lowell, BC couldn’t keep a two-goal halftime lead for long. Sloppy defending from BC led to a wide-open Tanner Roberts turning and slotting far-post from close range in the 59th minute.

Ten minutes later, NC State tied it up off of a corner kick, which had troubled BC all game long. With the Wolfpack stacking the 6-yard box around Saladin, Duchscherer whipped in a dangerous ball that was flicked into the far post. Duchscherer put in a man-of-the-match performance for the Wolfpack, highlighted by his corner kicks—every one of which was hit with pinpoint accuracy into the 6-yard box.

A minute and six seconds later, BC answered through Davock, who completed his hat trick with a sublime goal. Receiving the ball at the top of the box, the sophomore cut through two defenders to take him one-on-one with keeper McCauley. Davock danced around McCauley with a deft touch to his left before tapping it into the net. For Kelly, Davock is a weapon he has been waiting for all season.

“The last goal he scored was a thing of beauty, just phenomenal,” Kelly said. “He’s back.”

The soccer gods were not done just yet, though. In the 85th minute, NC State easily moved the ball down the sideline and cut a ball back to an open Lukas Zarges, who only had to pass the ball gently into the far corner from close range.

Amid the chaos that unfolded on the pitch, a few talking points stick out.

Most notably, it was senior night and Lewis’s last regular season game on the Newton field. It was emotional night for Lewis and fellow four-year seniors, Ike Normesinu and Ado Kawuba, but Lewis was up to his usual tricks. In the process of leading the attack with speed and skill, he tied the BC record for career assists with 26.

The win ensured the seniors at least one more home game in their careers, as BC will host Virginia Tech next Wednesday in the first round of the ACC tournament in the 8 vs. 9 seed matchup. Going in, BC knew a win would secure home field advantage and that any other result would send them on the road. While it’s nice for the seniors to get another home game, it’s crucial for the whole team to not have to travel, as BC will most likely need a good run in the tournament to secure an at-large berth into the NCAA’s.

The renaissance of Davock and an offense that has been fallow for the last stretch of the season is a good sign going forward. A win on Senior Night sparked BC’s amazing run last year, and with a new formation with Davock at central striker and Lewis and Normesinu playing higher up the field, the run for the Eagles starts now.

Regardless of whether the game ends 1-0 or 5-4 with an overtime own-goal against NC State, this year’s Eagles just need to continue to survive and advance.